After 107 appearances and 50 goals for Australia, Tim Cahill called an end to his international career in July after appearing at a fourth straight FIFA World Cup™ when he came off the bench versus Peru in Russia.

From his double against Japan in 2006, to score Australia's first goal and secure the country's first win at a FIFA World Cup, Cahill also went on to score on the biggest stage in 2010 and 2014.

His stunning left foot volley against the Netherlands at the FIFA World Cup 2014 will go down as one of the defining moments of Cahill's stellar career, which also involved the 38-year-old helping the Caltex Socceroos to international silverware at the AFC Asian Cup 2015 .

Here are the moments that will live forever in the hearts and minds of Caltex Socceroos fans, with Tim Cahill securing his legacy as one of our greatest servants to the Australian national team...

The Caltex Socceroos’ return to the FIFA World Cup for the first time in 32 years looked like being soured when Australia trailed Japan 1-0 in their opening match in Kaiserslautern.

Brought off the bench by coach Guus Hiddink in the second-half, Cahill sent his name into folklore in a crazy last 10 minutes when he poked home after a scramble in the box to score Australia’s first-ever goal at a FIFA World Cup.

He wasn’t done there, putting Australia in front soon after with a sensational strike which smacked into the post and in to secure Australia’s first-ever win at the tournament.

Who will ever forget the call from commentator Simon Hill: “Cahill! Tim Cahill has done it again!” A moment that turned Cahill into a national hero overnight. 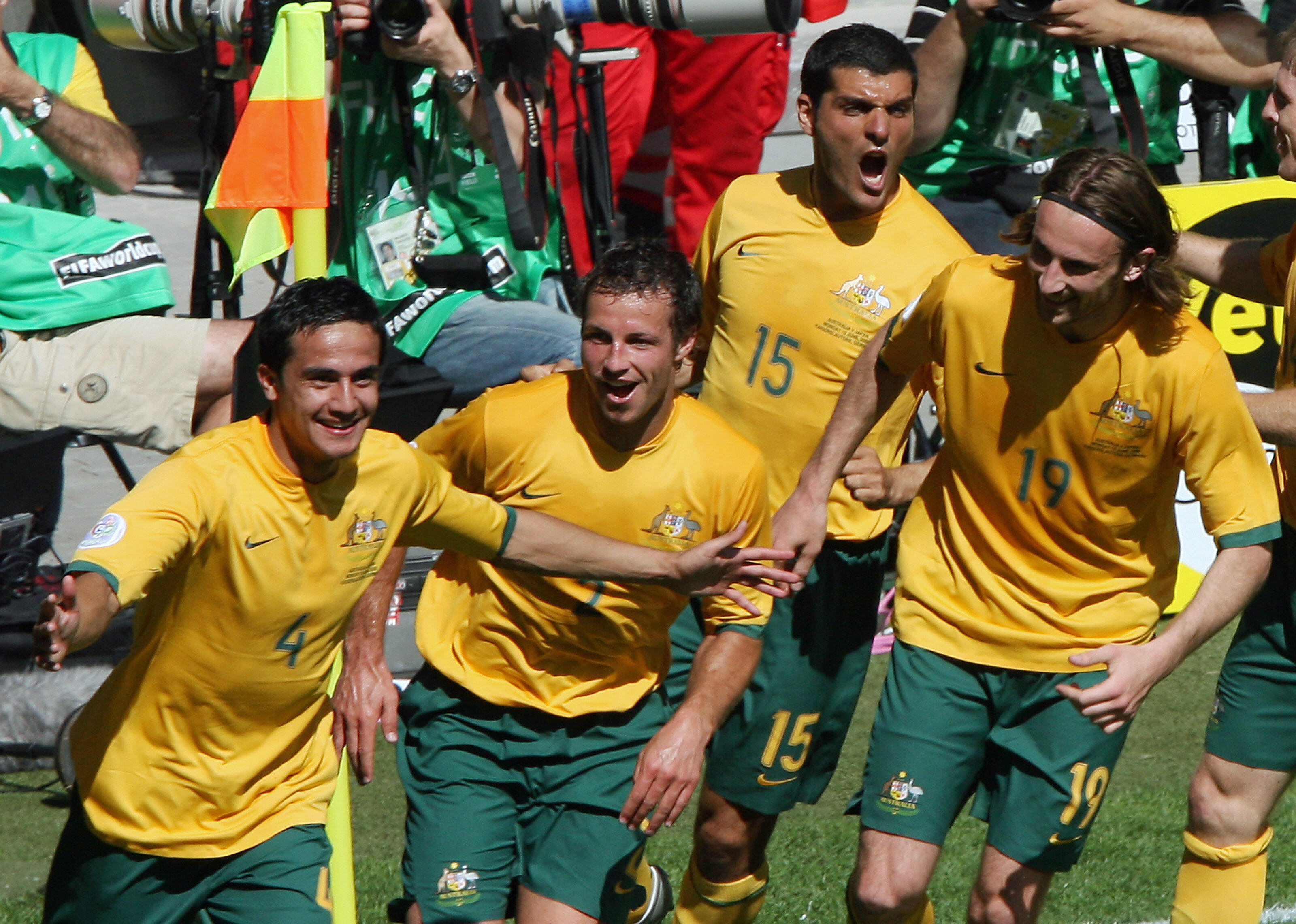 The FIFA World Cup 2014 in Brazil saw some wonderful goals but probably none better than Cahill’s stunner against the Dutch in Porto Alegre.

Just seconds after falling behind to Arjen Robben’s goal, Cahill produced a moment that will live long in the memory of Australian sports fans.

Ryan McGowan’s floated ball into the box dropped down perfectly into Cahill’s path just inside the box.

And Australia’s greatest-ever goalscorer showed wonderful technique, hitting a first-time volley which scorched past the keeper, cannoning in off the crossbar.

The stunning goal earned Cahill a nomination for the 2014 Puskas Award for the best goal around the globe and is still one of the greatest goals ever scored in the green and gold. 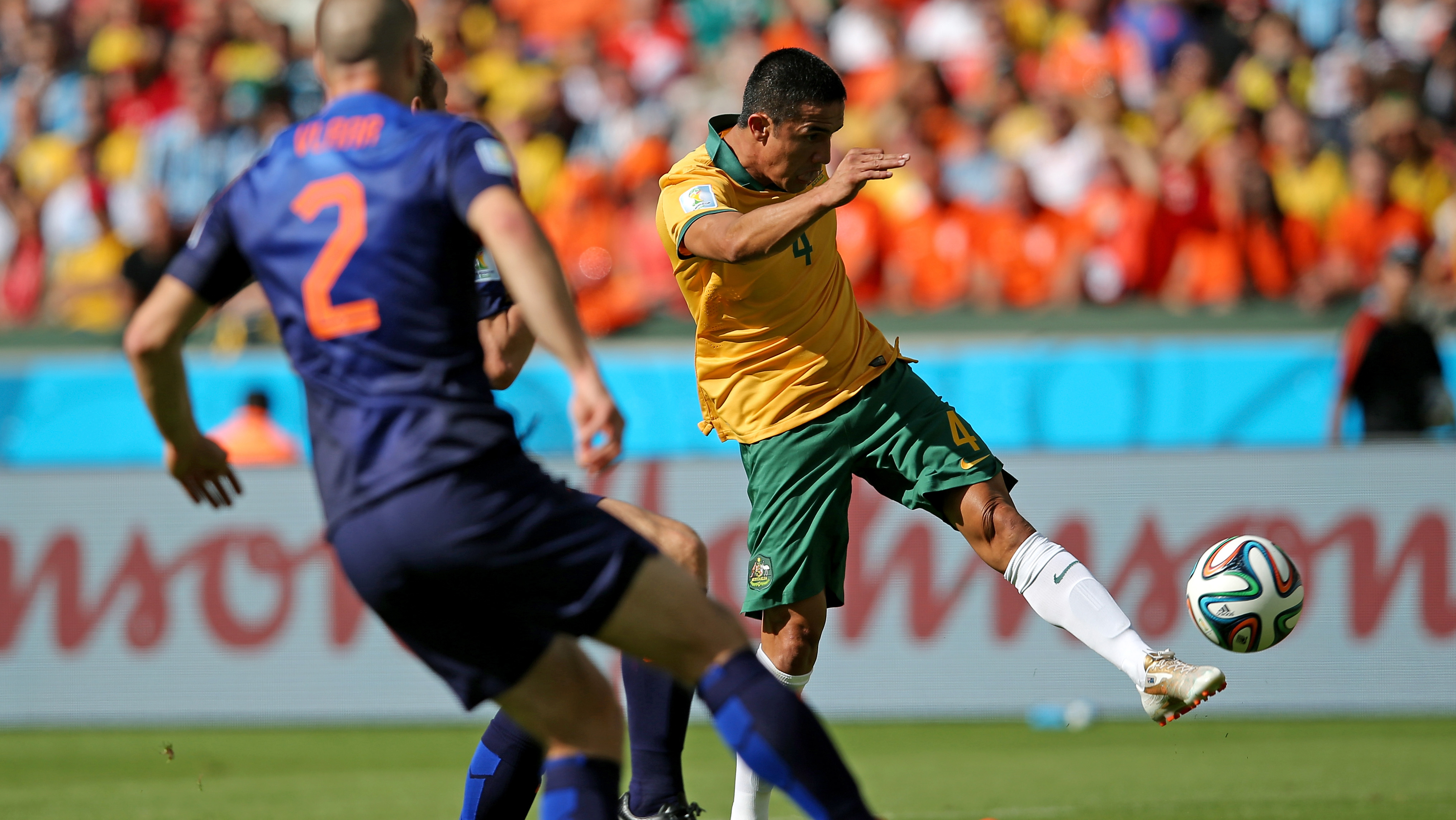 With China proving to be a tough nut to crack in the quarter-final of the AFC Asian Cup 2015 , the Caltex Socceroos needed something special to break the deadlock in the second half.

Cahill proved to be the difference again with another sumptuous strike for the highlights reel.

A looping header back into the box from Ivan Franjic didn’t look like it would cause any real issues for the Chinese defence until Cahill came up with a spectacular scissor kick which flew into the net.

He then made the result safe soon after with a trademark header as Australia survived a scare on their way to lifting the trophy on home soil. 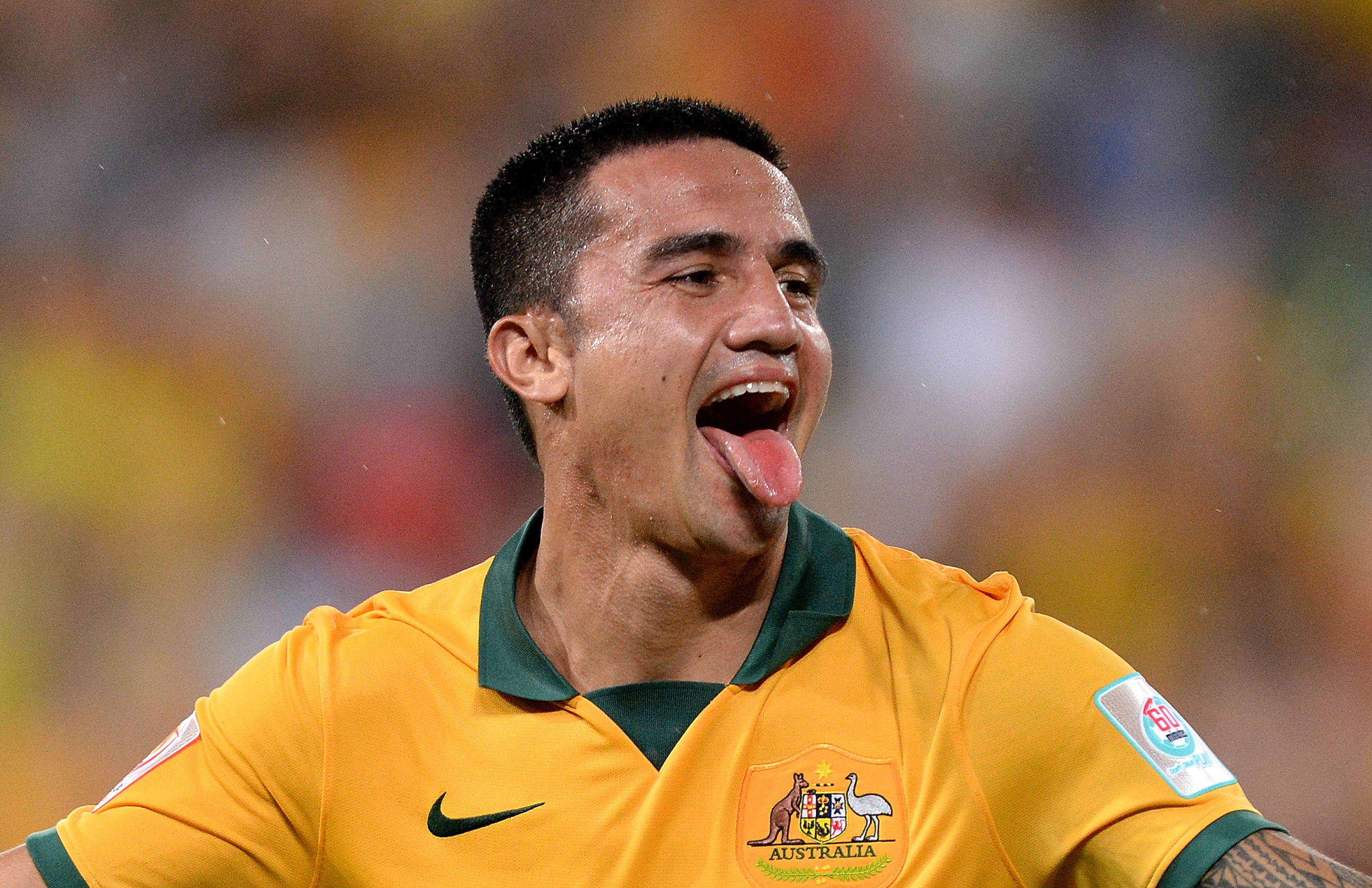 The Caltex Socceroos had to go through a two-legged playoff against Syria in order to keep their road to Russia alive.

After a 1-1 draw away in the first leg, Australia were dealt an early hammer blow in Sydney, going behind to Omar Al Soma’s early strike.

He first restored parity soon after when he nodded home Mathew Leckie’s pinpoint cross before rising highest in the 109th minute to power in another header to keep Australia’s FIFA World Cup dream burning.

The second goal was Cahill’s 50th at international level and one of his most important. 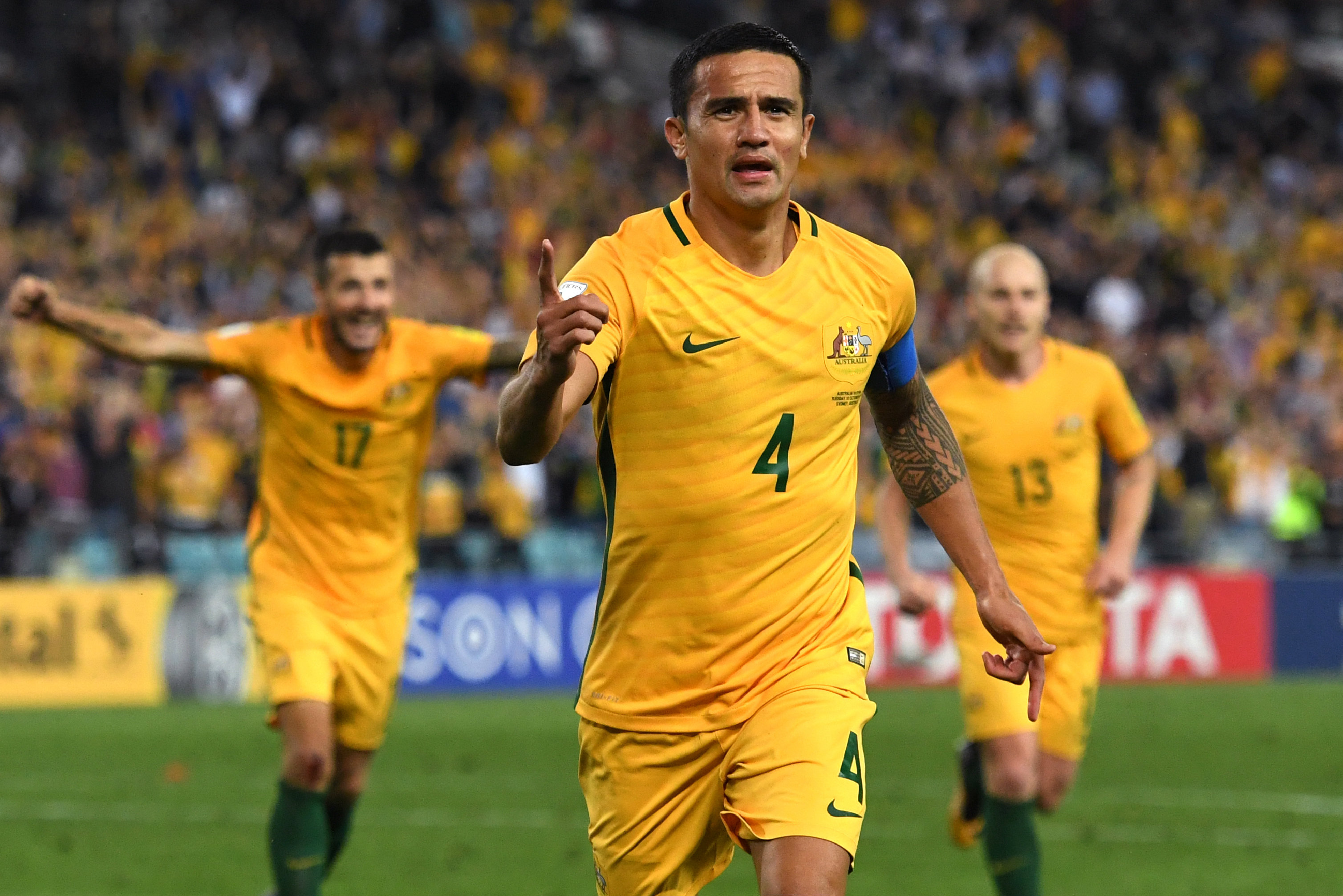 After deciding to return home to play in the Hyundai A-League with Melbourne City in 2016, all eyes were on Cahill for his first match in the Derby against Melbourne Victory.

And he didn’t disappoint, scoring one of the all-time great Hyundai A-League goals to send City on their way to a huge win over their bitter rivals.

The ball sat up perfectly for Cahill just inside Victory’s half and he instinctively hit a volley from 40-yards out which sailed over keeper Lawrence Thomas and into the top corner of the net.

It was an unforgettable introduction to the Hyundai A-League for Cahill, and one that would ultimately take out the competition’s Goal of the Year.

In the same season he also scored the winner as City picked up their first piece of silverware with a 1-0 win over Sydney FC in the FFA Cup Final. 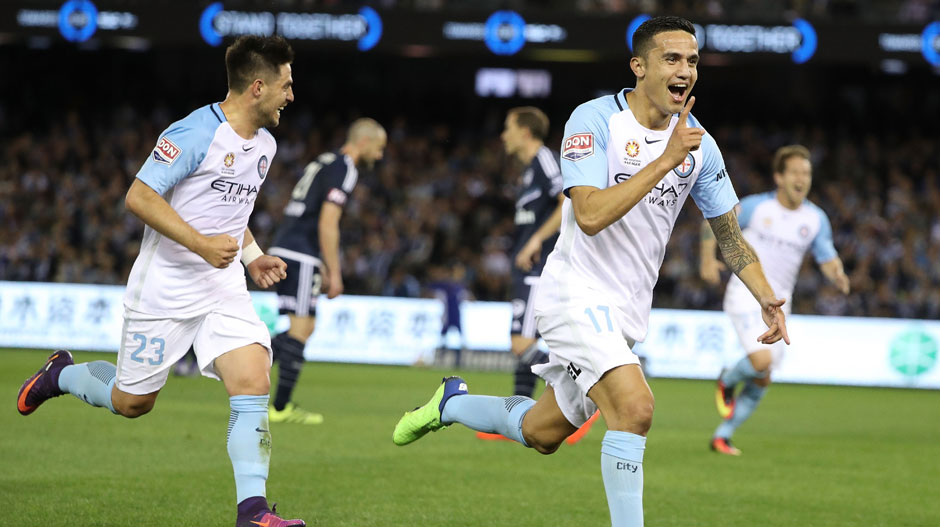