Olyroo Profile: Deng inspired by Arnold's call to "go for gold" at Tokyo 2020

Australia U-23 defender Thomas Deng says the group of 22 players assembling in Japan are capable of producing something special at the Men's Football Tournament at Tokyo 2020.

Based in Japan with J.League side Urawa Red Diamonds, Deng's transition from clubland to the national side has been a relatively easy one in comparison to those travelling from around the world to assemble ahead of the Olympic Games.

Deng's journey to becoming a member of the Australian national team, however, was not so straightforward. Hear from the Kenyan-born defender as he tells SEN of his Olympic hopes, life in Japan and pride in representing the Green and Gold.

Did you know? Deng is the only player in the Australia U-23 squad playing his club football in Japan.

Currently in his second season with Urawa Red Diamonds, Deng last appeared for his club side on July 3 in a 0-0 draw with Vegalta Sendai, travelling to join Arnold's squad in Fukushima the very next morning.

As preparations ramp up for Australia's first game of the Men's Football Tournament against Argentina on July 22, Deng says the confidence in the 22-player squad is sky high.

Targeting medals is a repeated message Arnold has drilled into his squad according to Deng, who comes into the squad as one of its senior members.

Deng made his debut for the Socceroos in 2018 alongside fellow South Sudanese refugee Awer Mabil.

Now, approaching the Olympics in 2021, Deng says the bar has been set high by Arnold, who hopes to achieve glory with both the Australia U-23's and Socceroos.

"I think it’s very important to stay together during this time," Deng told SEN.

"We’ve got a very good group of boys, the staff have been great with us. We’ve got a lot of belief and we’re looking forward to the tournament.

Yeah of course, (a gold medal) is our aim. Arnie’s said it multiple times, we want to go for gold.

I think we’ve got a massive opportunity, a good group of boys here and we can do something really special."

After a challenging first season at Urawa Red Diamonds, Deng is beginning to reap the rewards of persisting through the challenges of starting a new chapter of his life in a foreign country in the midst of the COVID-19 pandemic.

Deng made his move to Japan in January 2020. The dynamics of the world changed in the following months, presenting the young defender with the challenges of experiencing the initial stages of the COVID-19 crisis alone, without family, friends, or football for months on end.

But after persevering through a turbulent beginning to life in Japan, Deng is now thriving in his new environment. He says the career move is benefiting his outlook ahead of the Olympic Games to be held in the same country.

"I got the move here and then as soon as I got here the season stopped for three months.

"I was at home by myself in my apartment not knowing what to do. I didn’t really know many people, and I found it really difficult.

"But now it’s my second year, I’m a lot more settled. I’m starting to learn the language, and trying to embrace the culture as well."

"It’s a massive benefit," Deng added. "I didn’t have to travel, I avoided a lot of protocols and things like that, it made it much easier for me to meet the team here, I actually played three nights ago and the following morning I travelled to Fukushima.

"It was quite easy for me."

A long road to Olympic destiny

Deng's journey to the Australian national team began in Nairobi, Kenya where he, his four older siblings and mother departed when he was six years old to be granted refugee status in Australia.

Deng found comfort in football and the communities that fostered within it, managing to make friends and connect with others - by speaking the global language of the beautiful game.

A move to Victoria from Adelaide saw Deng join Melbourne Victory, where he rose through the ranks to become an A-League Champion and receive his first Socceroos cap in 2018.

Deng went on to captain the Australia during the AFC U-23 Championship in Thailand, where the Green and Gold finished third to book their place at a first Olympic Men's Football Tournament since 2008.

As he prepares to play his part in Tokyo later this month, Deng takes the time to reflect on his unique road to the national side, and what it means to him to represent the country on the international stage.

"I look back at all the trials and areas that I’ve been through, and the tough situations," he said.

I appreciate where I am today, playing for Australia, leading the team to an Olympics.

It’s a proud moment and an honour and an experience we’re going to remember for a long time." 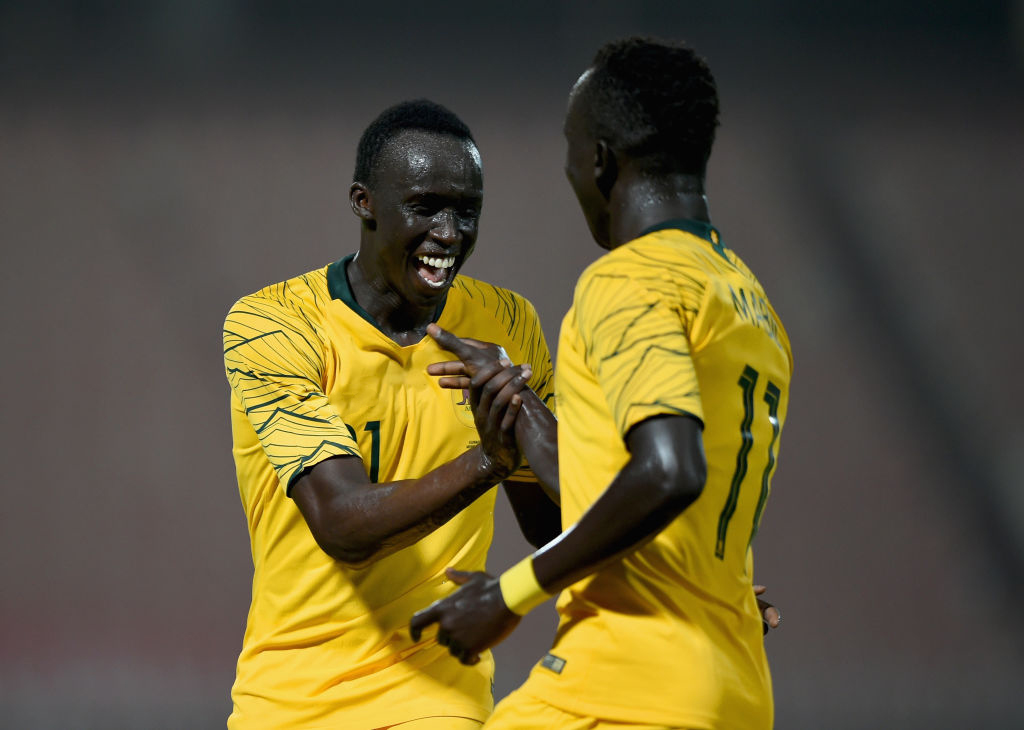