The Australian Olympic Committee has announced the 18-member men’s Football team for Tokyo 2020, with the ‘Olyroos’ returning to the Olympic arena for the first time since Beijing 2008.

The Olyroos qualified for the Games in January 2020, with Nicholas D’Agostino’s second half strike against Uzbekistan lifting Australia to an emotional Asian Qualifying Tournament victory in the winner takes all playoff in Bangkok, Thailand.

“It is fantastic to see the Olyroos back in the Australian Olympic Team for the first Games since Beijing 2008,” Mr Chesterman said.

“Congratulations to all of the players selected today to add to Australia’s Olympic football legacy. It has been a long road to achieve this Olympic milestone, and today is a day to celebrate for the players, their families, friends and supporters.

“To have both the Olyroos and Matildas in action in Tokyo will be great for football fans across the nation. The men’s team has been working very hard under the direction of coach Graham Arnold and I know they are really excited about the challenge ahead and have their opportunity to make their mark on the world stage.

“Thank you also to Football Australia for helping take these athletes from starting out on a suburban ground to representing Australia at the world’s biggest sporting stage. There are exciting times ahead for the Team and the sport.”

Today’s announcement takes the number of athletes selected for the Australian Olympic Team for Tokyo past 300 of an expected 450-480 team size.

23-year-old forward Nicholas D’Agostino said being selected to the Olympics was a proud moment in his career.

“This is unbelievable," D'Agostino said. "It has been a long road, a lot of hard work, a lot of preparation to get the mind and the body right. But I am just glad that it is finally here, that I have earned a spot, and now I just want to get over to Japan and get started as soon as possible.

"My favourite Olympic memories are of these smaller nations that go and give it their all and show the world what they are capable of. I think that’s what we want to set out to achieve – we want to go show the world that Australia can play football. I just want to go over there, put some good performances in and make my family, my country, and myself proud.”

Even 17 months on, the memory of scoring the goals that put Australia back Into the Olympics for men's football still creates a buzz for D'Agostino.

Words can’t describe that feeling to be honest, just incredible. I have watched that goal and watched that game so many times back just to re-live it, every single time it is unreal and the feeling never dies. It always creates that little buzz inside you that you just want to go out there and play and do that again."

24-year-old defender Ruon Tongyik, born in South Sudan before moving with his family to Australia aged six, said he will cherish the opportunity to wear the green and gold at an Olympics.

"It's a great honour to be able to represent Australia and it is just a wonderful feeling to be selected," Tongyik said. "I've told my family, they're super excited, and I think it is really starting to kick in for me in knowing that I am going to be an Olympian and I am going to Tokyo."

"Our community is going to be very, very happy for me. Seeing someone like myself, the history, all the trials and tribulations that I have been through as a player and as a person as well. People that I know and I do look up to, players, friends and family, they are going to be very stoked for me and I am very happy to be able to represent them as well.

The Olyroos have been drawn in Group C with Egypt, Spain and Argentina, and will open their campaign on 22 July in Sapporo against the Argentinians.

Coach Graham Arnold said the team could shock the world in Tokyo.

“It is such a special moment and special time, I am really excited to get to Japan, I can’t wait,” Arnold said.

“The players that have been selected they are all excited, they are all grateful for the opportunity and the chance. The strength of the Socceroos is the Olyroos and I do expect these kids to really step up.

“People might want to look at it as a ‘Group of Death’ but for me it is a ‘Group of Dreams’. It is what you dream about and you want to play these types of teams (Argentina, Spain, Egypt) and test yourself against the best in the world.”

*All players participating in the Tokyo 2020 Men’s Football Tournament shall be born on or after 1 January 1997. However, a maximum of three (3) players who do not meet this age limit may also be included in the official list of players for the final competition. Mitchell Duke (born 18 January 1991) and Ruon Tongyik (born 28 December 1996) have been selected as Australia’s overage players for Tokyo 2020.

Cameron Devlin, Jordan Holmes (goalkeeper), Ramy Najjarine and Lachlan Wales have been named as the Train On Players. If called up to the team due to injury or other circumstances, they would be selected to the Australian Olympic Team at that time.

The Football competition will run from 22 July – 8 August at venues around Japan. Find out more about Football at the Olympics in the infographic below.

Today’s announcement takes the number of athletes selected past 300 of expected 450-480. Catch all the latest team info, stats and athlete bios at www.olympics.com.au/games/tokyo-2020/team/ 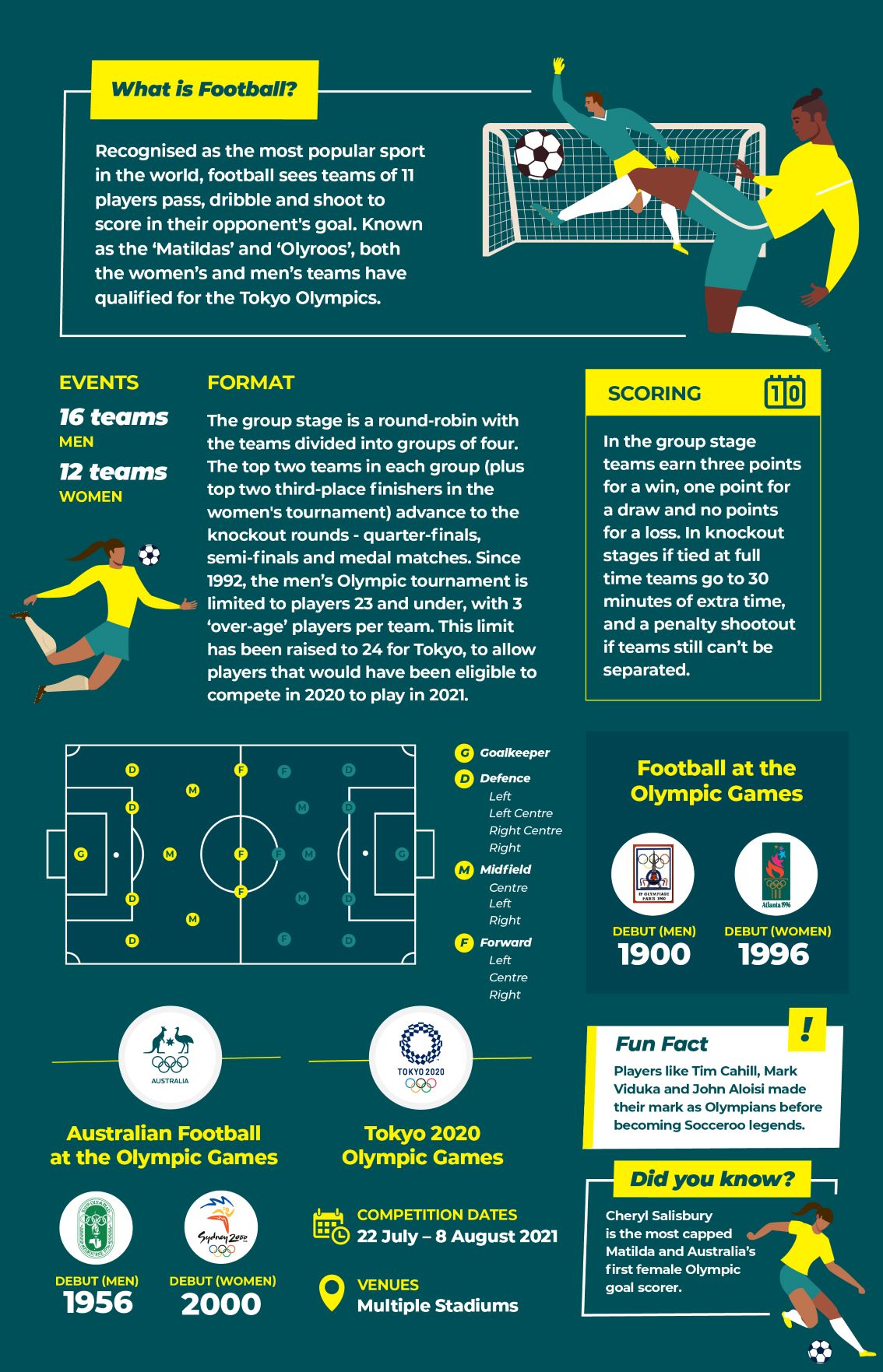