Fresh from winning the Joe Marston Medal as best on ground in Melbourne City’s 3-1 Grand Final triumph over Sydney FC, Nathaniel Atkinson says he is ready to “make the country proud” at the Olympics.

It was a remarkable end to an memorable season for Atkinson, who fought back from a high-grade hamstring tear in early April.

But now the 22-year-old is ready to write another chapter in his impressive season with an Olympic football tournament as an Olyroo.

As kick-off against Argentina on July 22 draws closer for the Olyroos, read more about Atkinson’s journey from leaving home as a 14-year-old to overcoming injury and becoming an Olympian as socceroos.com.au provides you with a chance to get to know every member of Graham Arnold's squad that little bit better.

ULTIMATE GUIDE: Everything you need to know about Australia Men's Football Team at Tokyo 2020

Atkinson is the only Tasmanian-born player in Australia's Men's and Women's Football Tournament squads for Tokyo 2020.

A 'bit of a journey' coming through from Tassie

Originally from Tasmania, Atkinson began playing football for Riverside Olympic before joining the National Training Centre (NTC). It was from there that Melbourne City’s youth coaches scouted the talented youngster.

After impressing in City’s youth team, where he won a National Youth League Championship and Premiership, Atkinson’s journey from Tasmania notched another significant milestone when he was handed his A-League debut.

It was a debut to remember for the 18-year-old, who was one of City’s best in a 1-0 win over Central Coast Mariners in 2018. He worked tirelessly on the right-wing and earned himself a position in the senior squad for the remainder of the season.

After nearly 60 A-League games for Melbourne City, Atkinson decided to move to Perth Glory but COVID-19 intervened, and he remained at City.

It was an extraordinary twist of fate that culminated in the boy from Tazzie staying in Melbourne and going on to win a Championship and Premiership in 2021.

As one of City’s most promising youth graduates, Atkinson’s game has gone from strength to strength but his humble beginnings in Tasmania are not lost on him.

“It’s been a bit of a journey. I moved away from home when I was 14, and then moved to Melbourne when I was 16,” Atkinson explained.

“Obviously coming from little old Tassie, I never thought that these things were possible and here I am today.

“Coming through the City youth team into the first team, and then also going through the Young Socceroos has been a long journey but, we're still all young so hopefully there's plenty more to come.” 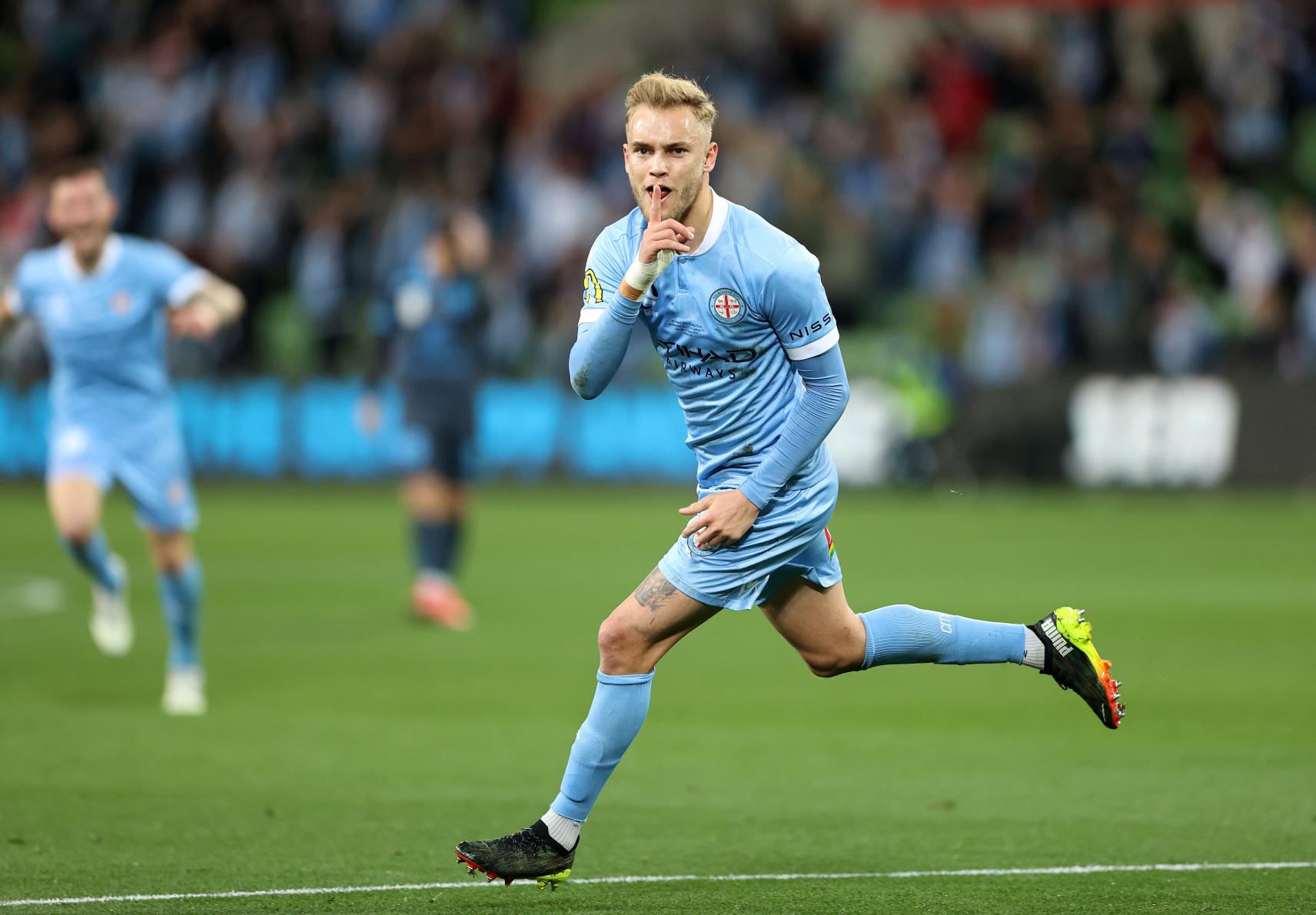 Overcoming an injury that threatened to ended his Olympic dream

After suffering a high-grade hamstring tear in early April, Atkinson was all but certain to miss the Olympics through injury.

But Atkinson was to make a remarkable comeback, returning to action far quicker than expected and just in time to play a pivotal role in City’s league and finals triumphs.

Atkinson scored the all-important goal to level the scores in the first half and created six chances for his side on his way to claiming the Joe Marston Medal as the best on-field as City lifted their first Grand Final trophy.

Despite the prospect of a two-to-three month absence from football, Atkinson used the injury as motivation.

“It was painful at the time but I think a lot of the tears were due to the fact that there were a lot of things coming up in the year with the Olympics, A-League Grand Finals and even possibly the Socceroos so it was definitely an emotional time for myself,” Atkinson explained.

“It was my second or third hamstring injury for the season so it was definitely a kick in the guts.

But I think it was also a motivation for me to come back in a quick time frame, come back stronger and be ready to put my name out there for the Olympics.

“A lot of things went my way with the COVID outbreaks and the finals being delayed so it just gave me more time to come back and to get match fit to come into the Olympics."

Taking 77 touches and scoring an emphatic goal in a Grand Final performance to savour against Sydney FC, Atkinson left the field with two medals draped around his neck - a Joe Marston and an A-League Championship medal.

While he turns his attention to the Olympics, Atkinson’s Grand Final victory and man-of-the-match performance will not be lost on him anytime soon.

“Last season, we made a Grand Final, and we were on a high so to finish that Grand Final with a loss was disappointing but it was also a good experience and we definitely benefited from it,” Atkinson said.

“This year, coming away as the minor premiers and then winning the Grand Final was definitely the greatest moment of my career.

“Obviously, winning the Joe Marston was also the cherry on top for me. Winning those two trophies with the lads is definitely the pinnacle of my career so far.”

During that Grand Final, Atkinson played in a front three but he has also played at right-back. It is this kind of versatility that will only aid his quest for Olympic glory.

While he has been used in a variety of different positions, Atkinson admitted that he enjoys playing where he can showcase his attacking and defensive capabilities.

“I’ve always been a pretty versatile player. When I was growing up, I was a midfielder and winger and now, I’ve been converted into an attacking fullback,” he said.

“For me, I love attacking, dribbling and getting forward but I also like doing the defensive duties as well so I do a bit of both. The wingback position would be the best position for me, I reckon.”

Now faced with the opportunity to achieve something special with his Olyroos’ teammates in Tokyo, Atkinson is ready to add another notch to his impressive CV.

While there has been a lot of hard work in overcoming setbacks to arrive at this moment, Atkinson does not take for granted what it means to wear the Green and Gold.

“When you put on the Green and Gold jersey, there isn't a better feeling in the world than playing for your country.

“Obviously, winning trophies for your club is amazing but when you get to represent your country and a nation as a whole, it's definitely an amazing feeling.

“It will be a great tournament and hopefully we can do the country proud and see what happens.”