The Socceroos have bounced back in impressive fashion at the AFC Asian Cup UAE 2019™, beating Palestine 3-0 at a sold-out Rashid Stadium on Friday night (AEDT).

First-half goals from Jamie Maclaren - his first for the Socceroos – and Awer Mabil had Australia in the lead before substitute Apostolos Giannou capped things off in the final minute.

It was a strong performance from Graham Arnold’s troops, who were desperate to respond after losing their opening match against Jordan.

Chris Ikonomidis was one of three changes to the starting XI and the Perth Glory attacker was superb, setting up Mabil’s and Giannou’s goals and involved in many of Australia’s best moments.

Jackson Irvine, Tom Rogic and skipper Mark Milligan were also excellent as they dominated the midfield, but there wasn’t a bad player in Green and Gold as the Socceroos registered their first win of the tournament.

The only downside for Australia was a late yellow card to defender Trent Sainsbury, which will rule him out of the final group match against Syria.

RE-LIVE: All the goals, action and talking points from the Socceroos' clash with Palestine
LIVE BLOG: Keep across all the latest from Socceroos camp
SOCCEROOS PODCAST: Listen to episode 3 with Michael Zappone and Ben O'Neill

After the opening game loss to Jordan, the Socceroos came out with a point to prove and dominated possession and chances from the outset.

And they got their reward inside 18 minutes, as Tom Rogic’s delightful cross was diverted in by a brilliant header by Maclaren.

The Australians were buoyant now and just two minutes later they doubled their advantage.

The attack came down the left, with the impressive Ikonomidis beating one defender before floating a cross to the back post where Mabil arrived to volley past the keeper.

The Socceroos were playing some scintillating football and almost had a third before the break.

Mark Milligan’s incisive pass found the feet of Maclaren in the box, with the striker laying it off to Mabil who only had to keep his shot down but fired over the bar.

There was no let-up by the Socceroos in the second half, with their movement and delivery into the penalty area causing Palestine plenty of problems.

Only the crossbar denied Australia a third when Rhyan Grant’s cross deflected off a defender onto the woodwork, while Jackson Irvine was inches away from finding the net with a header.

Just as it looked like the Caltex Socceroos would have to be content with just the two goals, Giannou got his name on the scoresheet at the death.

From a corner, Ikonomidis sent in a curling cross to the far post, with Giannou breaking free from his defender to power in a header from close range. 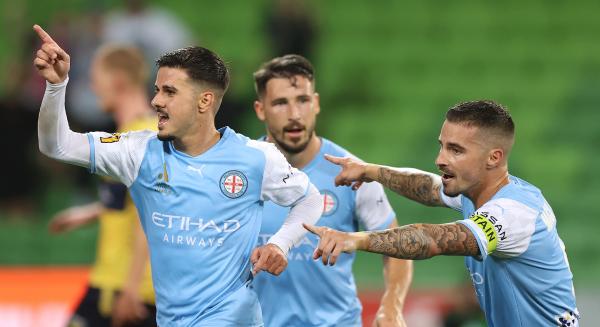 Another A-League Men Championship potentially awaits for Melbourne City's stars this weekend with four Socceroos in the line for silverware.  Mathew Leckie will play his first-ever Grand Final for Melbourne City FC, while Jamie Maclaren, Marco Tilio and Connor Metcalfe