He scored the goal that sealed Australia's first Olympic Men's Football Tournament qualification in over a decade. 18 months on from that momentous night, Nicholas D'Agostino gets the chance to reap the rewards of his all-important strike as part of Graham Arnold's team bound for Tokyo.

D'Agostino scored the solitary goal in Australia's 1-0 win over Uzbekistan in the third-place playoff at the AFC U-23 Championship on January 25, 2020 to seal the Green and Gold safe passage to the Olympic Games.

Australia face Argentina on July 22 in the first of three games in the group Arnold has labelled the 'Group of Dreams'. Facing Argentina, Spain and Egypt is an exciting prospect for 23-year-old D'Agostino, who still relives the moment he booked his nation a place in the Olympic Games over and over in his mind.

With an exciting Olympic campaign beckoning, read on as socceroos.com.au take you deeper into D'Agostino's story ahead his date with destiny at Tokyo 2020.

Did you know? Back in January, 2020 A piece of individual brilliance from D'Agostino booked Australia's spot at the Tokyo 2020 Olympic Games.

The goal, scored off a slaloming run into the box with a neat right-footed finish, was enough to send Australia past Uzbekistan with a 1-0 win in Thailand.

The game which took place on January 25, 2020 occurred almost 18 months to the day before Australia's first group match of the Olympic Games is set to kick-off against Argentina on July 22, 2021.

Read on below for more on D'Agostino's expectations for the Olympic Games... 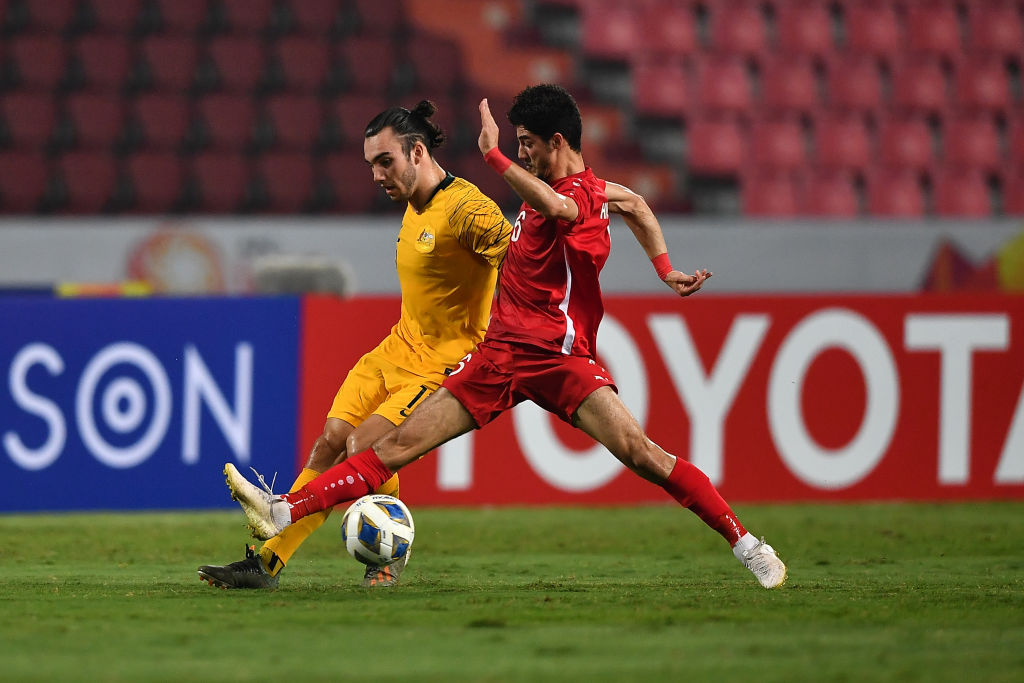 D'Agostino's pride in Uzbekistan match-winner a 'feeling that never dies'

The equation was simple for the Australia U-23's on January 25, 2020: Beat Uzbekistan and qualify for the Olympics. Fail to do so, and go home empty-handed.

D'Agostino favoured optimism over fear as he rose to the occasion to decide the do-or-die fixture off his own boot in a 1-0 win for the ages.

"I don’t even think words can describe that feeling to be honest, just incredible," he said.

I have watched that goal and watched that game so many times back just to re-live it, every single time it is unreal and the feeling never dies.

"It always creates that little buzz inside you that you just want to go out there and play and do that again. And just a memory of all the boys dancing around my jersey in the change room afterwards.

"I had my jersey on the ground and they were all dancing around and chanting around after it. Feelings and memories that I will never forget that’s for sure.

"It was just an incredible feeling. It had been a long time since we had qualified for an Olympic Games, and just the feeling of belief that we had in each other, the staff, and that the staff that put in us.

"Just the camaraderie that we had together was just so strong, we thought we could overcome anything and we finally go there and we were so proud of each other and ourselves."

"We enjoyed that night a little bit first, it didn’t really kick in straight away to be honest that we had qualified for the Olympic Games," he added.

"I remember doing an interview after the game and it hadn’t quite sunk in yet what we’d just achieved.

"I think it was the next day that it actually sunk in and kicked in. Since then it has all been about getting that spot, playing at club week in, week out, scoring goals, and just putting my best foot forward and putting my name in the hat."

'Group of Dreams' an opportunity to claim big scalps

Argentina, Spain and Egypt will pose a stern test to Australia at the group stage of the Olympic Men's Football Tournament.

The nations with star power and well-known footballing pedigree will challenge an Australian men's side looking to make its mark at the Olympic Games after qualifying for the first time since Beijing 2008.

Australia kick-off their Olympic campaign against Argentina on July 22, before facing Spain on July 25 and Egypt on July 28.

"There are going to be a few high-profile players going, so you always want to see who you are up against, what team, and which country they are playing," D'Agostino said.

"It will be very interesting but we have got a very good squad and we want to go over there and win games, get as many points, and get out of that group.

"When you go to these big tournaments as a nation you want to play the best teams," he added.

"That is what we’ve got and there is going to be a lot of high-profile players as well, so I am really looking forward to that.

We want to play against the best but we also want to beat the best, that’s our goal, we want to win games."

When recounting his fondest memories of Olympic Games gone by, it's the athletes showing guts, grit and fighting spirit which stick in D'Agostino's mind.

He hopes to replicate the spirit shown by those athletes as he writes his own chapter of Olympic history in Tokyo.

"A few come to mind – not so much football to be honest. Usain Bolt, Sally Pearson, you’ve got the Jamaican bobsled team for example," he said.

"Just these smaller nations that go and give it their all, and put on a show for the world and show the world what they are capable of. I think that’s what we want to set out to achieve – we want to go show the world that Australia can play football.

"Just so many world class athletes from all around the world competing at the very highest level in their respective sports.

"That’s the main thing, I just want to go over there, put some good performances in and make my family, my country, and myself proud."

A spot in the Olympic squad means so much more to D'Agostino than the journey itself.

The young star will travel to Japan and back, and play some football in the process, but representing his country at Olympic level takes on a deeper meaning when D'Agostino assesses what it will mean to his family, who have waited far too long for the moment to arise.

"They are just going to be so proud," he said.

"Like I said before it has been a long time coming. They booked tickets to go to Tokyo last year, so they always had in the back of their mind that they had the belief in me that I would make the squad.

"Unfortunately, they can’t come to Tokyo this time around but they will be very proud. I just can’t wait to tell them."