Central Coast Mariners and Young Socceroos drew 2-2 today (Thur) in a behind closed doors hitout at Central Coast Stadium with all goals coming in the opening 45 minutes.

The U-20s national team were in camp on the Central Coast this week in preparations for the AFF U-19 Championship (11-24 September in Hanoi) and AFC U-19 Championship (13-30 October in Bahrain) with the ultimate goal to qualify for the FIFA U-20 World Cup in 2017.

Mariners Trent Buhagiar and Liam Rose lined up for the Young Socceroos against their club teammates at right wing and centre midfield respectively.

The opener came from a pinpoint set piece by Fabio Ferreira who whipped a dangerous cross to the head of Roy O’Donovan.

The Irishman leaped above the Young Socceroos defenders to head home just under the crossbar in the 16th minute. 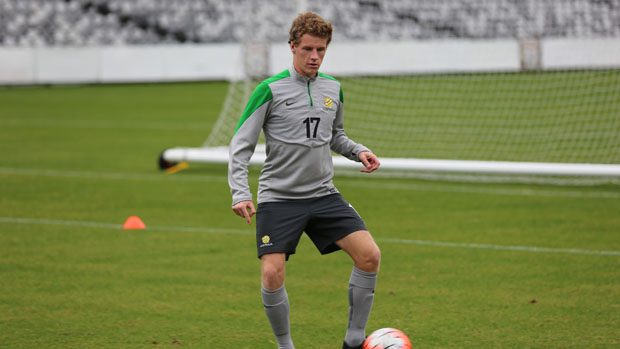 The Young Socceroos hit back in the 23rd minute when Jayden Prasad intercepted a ball in the corner before whipping a cross into the box. The Mariners were unable to clear the danger, which allowed Cameron Devlin to fire home from close range.

Six minutes later it was the Young Socceroos right winger, Buhagiar who burst down the right to deliver a dangerous cross. Buhagiar’s cross found the feet off Tariq Maia who finished off from point blank to make it 2-1.

Just before the break the Mariners leveled thanks to Ferreira who fired a shot that was stopped on the line by a defender’s hand, resulting in a penalty. Ferreira stepped up to the spot kick and made it 2-2 with a Panenka up the middle.

In second period of the match the game lost a little of its rhythm with wholesale changes to  the Mariners’ starting XI as the hour mark rolled past.