Who will start for the Socceroos against UAE?

The team from Goal Australia predict who they think Ange Postecoglou will select in his starting XI for the Socceroos' Asian Cup semi-final.

The Socceroos boss sprung some surprises for the Australia's 2-0 quarter-final win over China, handing Mark Bresciano a first start of the Asian Cup and dropping Aziz Behich for Jason Davidson.

Now Postecoglou and his backroom staff have to pick an XI equipped to get past the giant-killers of the United Arab Emirates and into the decider.

Here's who we think will line-up for kick-off in Newcastle on Tuesday night.

Barring illness or injury, this is a simple one for Postecoglou. The Club Brugge goalkeeper is Australia's undisputed number one and hasn't put a foot wrong in the tournament so far, keeping two clean sheets.

There are two big decisions to make as far as the defence is concerned. Franjic and Sainsbury were excellent again in the win over China in Brisbane, the latter in particular producing arguably his best performance to date in green and gold.

Spiranovic is available after serving a one-match suspension and we think he'll come straight back in for Alex Wilkinson, tough as it is on the Jeonbuk Motors man. Wilkinson didn't do anything wrong again China, but Postecoglou has already demonstrated he's not afraid to change a winning team and will revert to his strongest possible centre-back pairing.

There's another question to be answered at left-back. So far Aziz Behich and Jason Davidson have played two matches apiece, with the latter starting and impressing against China. The West Bromwich Albion man, who supplied the assist for Tim Cahill's second goal, isn't as strong defensively as Behich but offers more going forward.

With the UAE a danger on the counterattack could Postecoglou recall Behich? It's as close as a 50-50 call and we don't know which way Ange will go. 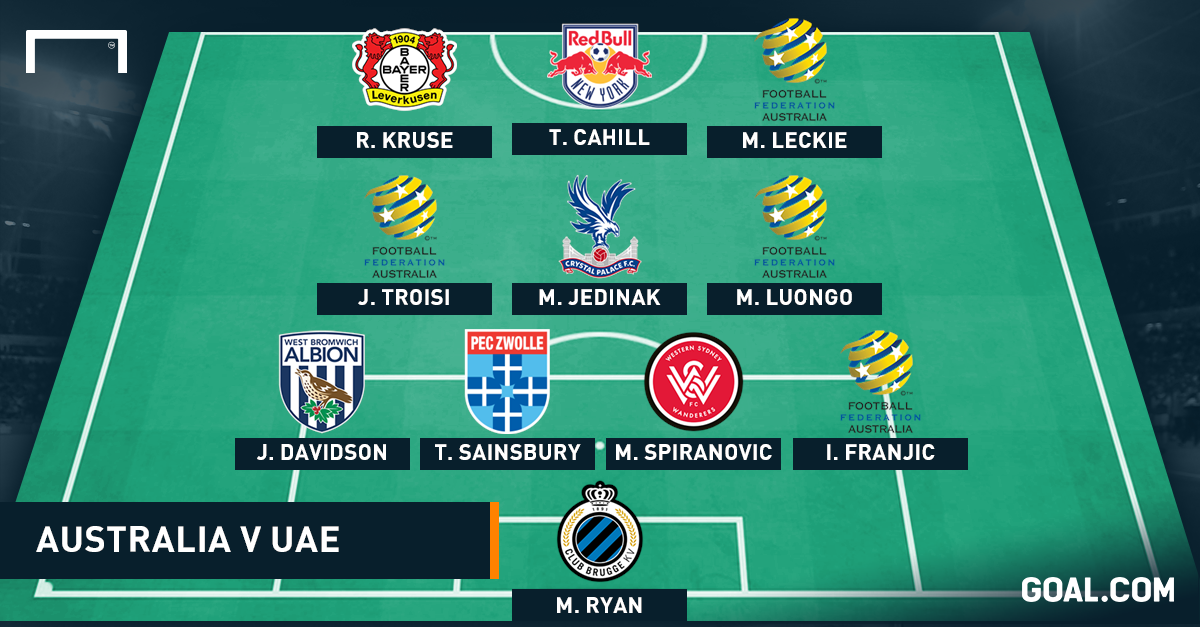 Jedinak, playing in his first match since the tournament curtain-raiser after overcoming an ankle problem, was off the pace in the opening exchanges against China, giving the ball away and picking up a cheap yellow card.

Hopefully the captain, who is as close as there is to a certain starter when available, will up to speed from the off against UAE, because we can't see Postecoglou dropping him, although Mark Milligan has been hugely impressive playing in two different midfield roles during his two starts and one substitute appearance.

Postecoglou also claimed Bresciano grew into the game after a slow start against China, but we don't expect the veteran to retain his place. The 34-year-old was picked at Suncorp Stadium to try and help the Socceroos dominate possession against a team less easily intimidated by the pressing that proved too much for Kuwait and Oman.

But with Japan sensationally dumped out on penalties and the UAE the surprise last-four obstacle, expect James Troisi to be recalled to partner Massimo Luongo. The two midfielders have the energy and work-rate to worry their opponents and the creativity to play the killer pass when in possession. Bresciano will then be available for 20 or 30 minutes off the bench to unlock the enemy or help to shut the game down if Australia are winning.

Only fitness concerns will prompt Postecoglou to disrupt his preferred front three this deep into the tournament. Leckie had a tight hamstring when he came off in the second half in Brisbane on Thursday, let's hope the Ingolstadt man has recovered fully and wil be capable of his usual exceptional physical output.

If not, it's possible Postecoglou will throw in Tommy Oar on the left and move Kruse to the right. Another alternative is for Troisi to play wide left and cut in, as he did against South Korea, meaning McKay, Milligan or Bresciano could partner Luongo further back.

Cahill meanwhile is certain to retain his place after bagging both goals in the victory over China, with Nathan Burns and Tomi Juric options off the bench.

The Socceroos play the United Arab Emiriates in the Semi-Finals of the AFC Asian Cup on Tuesday 27 January with the match to be broadcast LIVE on Fox Sports 505 and LIVE on ABC from 8pm AEDT.