What we learned from Socceroos v Germany

​Iain Strachan assesses Australia's eye-catching 2-2 draw with world champions Germany in Kaiserslautern on Thursday morning (AEDT). He says an Aussie victory was sacrificed on the altar of progress.

The fear factor is gone, on and off the field

A succession of unconvincing performances late in qualifying for the 2014 World Cup and the successive 6-0 defeats to Brazil and France had, by the time Brazil 2014 rolled around, left us fearing the worst when Australia faced the best.

Ange Postecoglou began the rehabilitation process by orchestrating competitive displays against Chile, the Netherlands and, to a lesser extent, Spain.

Now, having won the Asian Cup on home soil, we're back to a point where excitement was the dominant emotion as the Socceroos lined up for the national anthems on Thursday morning.

Anticipation has replaced anxiety, and - as we saw over the course of 90 minutes at the Fritz-Walter Stadion - with good reason.

Australia made an excellent start to the friendly, keeping the ball well and moving it forward with intent, creating a half-chance as early as the second minute.

When out of possession they applied the same aggressive press that unsettled Chile at the World Cup and proved too much for the likes of Kuwait, Oman and UAE to handle in January.

Germany demonstrated their exceptional technical quality and calmness under pressure to slice through the visitors several times in the opening 45 minutes and they looked particularly dangerous in the closing stages.

Credit must go to the Socceroos though, who stuck to their task and ultimately succeeded in disrupting the hosts for much of the contest. 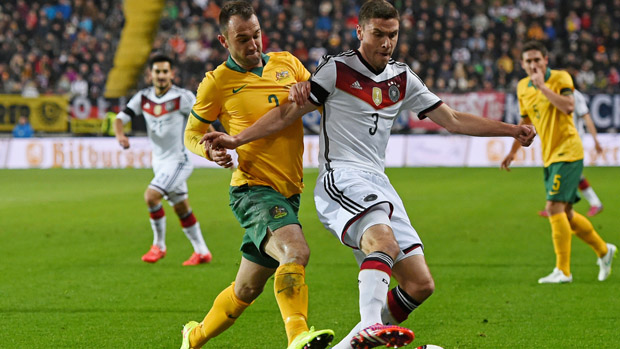 Strikers fail to take their chances

With Tim Cahill missing and Tomi Juric carrying an injury, Nathan Burns and Mathew Leckie had a chance to show what they can do.

Forwards are required to do more than simply score and both men are hard workers, Leckie's prodigious energy levels in particular helping to unsettle Germany's defence. Burns meanwhile did well to supply the cross for James Troisi's equaliser.

Unfortunately, both failed to hit the back of the net despite enjoying good opportunities to do so.

Leckie could have opened the scoring as early as the eighth minute when he was played in behind the Germany defence and beat his man to go one-on-one with goalkeeper Zieler, but sent his shot wide of the far post.

Burns then headed wide unmarked from close range six minutes later. The comparison is somewhat unfair, but Cahill would have devoured such an aerial gift. 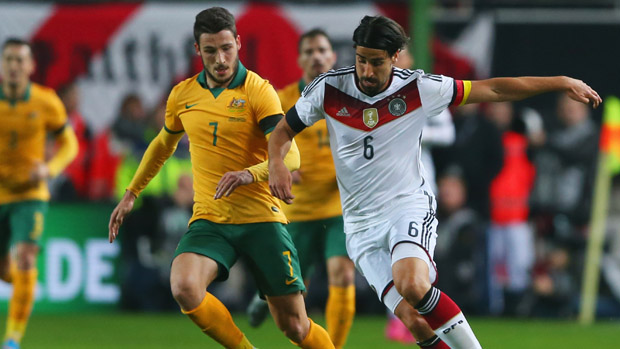 Criticising captain fantastic isn't a popular thing to do, but the fact remains, for all his tackling and interception expertise, Mile Jedinak isn't the best passer.

Ideally a holder midfielder shielding the back four should break up opposition attacks and then carefully feed players in more advanced areas.

Usually the skipper does exactly that, but he's only human and can occasionally turn the ball over with dangerous consequences.

It was the Crystal Palace man who surrendered possession and triggered the counterattack that led to Marco Reus opening the scoring.

He gave it away again with a suicidal sideways pass soon afterwards and the Socceroos were fortunate not to find themselves 2-0 down.

Fortunately the man with the armband, who would have been furious at himself for committing those two errors, made amends with a wonderful curling free-kick to give his team an unexpected lead.

Victory sacrificed on the altar of progress

What else are international friendlies for if not to test out different personnel and tactics?

Australia have seen a few results slip away after making substitutions in the second half of games, Ecuador in London and Japan in Osaka spring to mind. Add Die Mannschaft in Kaiserslautern to that list.

But Postecoglou isn't about to miss an opportunity to blood youngsters or give minutes to fringe players just to try and win an exhibition game against an under-strength Germany.

The boss has the big picture and the team's long-term development in mind.

Aaron Mooy, Oliver Bozanic and Bailey Wright in particular will benefit enormously from the experience of facing the world champions.

It should serve them well the next time Australia tackle an opponent of Germany's quality in competitive action.