The Caltex Socceroos face the United Arab Emirates on Wednesday morning (AEST). And with both nations winning their opening games this World Cup qualification group clash will be massive. But what happened last they met?

On a drizzly night in Newcastle, the Caltex Socceroos booked their spot in the 2015 AFC Asian Cup final with a 2-0 win over the UAE the last time these two nations met.

But it was two of the most unlikely goal-scorers that secured Australia the win in an excellent semi-final at Hunter stadium which broke UAE hearts.

Roared on by a parochial home crowd of more than 21,000 fans, Ange Postecoglou’s side wanted a fast start and delivered just that to shock Mahdi Ali’s men.

The match was less than three minutes old when Massimo Luongo’s out-swinging corner was met by a perfectly-timed Trent Sainsbury run and he headed into the bottom corner. 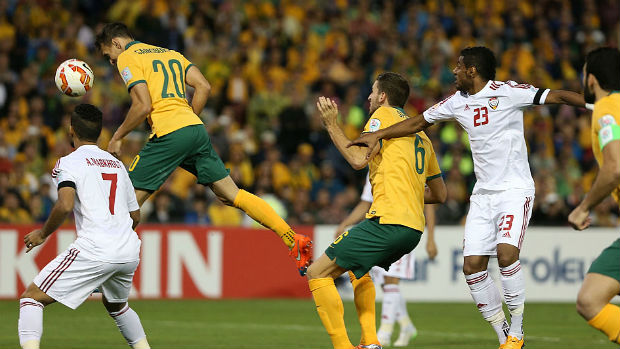 It was the defender’s first international goal and would have lifted the roof off Hunter Stadium if it had one.

Any potential pre-match nerves were immediately washed away. And things were to get even better for the hosts 11 minutes later.

Luongo reacted the quickest to slide the loose ball to Jason Davidson who finished truly from just 10 yards out, driving it past Majed Naser at his near post for his first Caltex Socceroos goal.

It was party time for the hosts but any team with the likes of Omar Abdulrahman and Ahmed Khalil in it can’t be discounted. 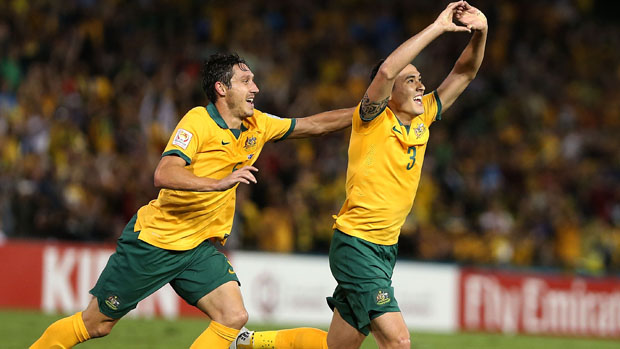 UAE enjoyed their best spell just before half-time with Khalil causing most of the problems for Australia’s back four but his last pass or shot often let him down and let the Socceroos off the hook.

Khalil again reminded Australia of his threat early in the second half with a shot from distance which whistled just past Mat Ryan’s post.

Postecoglou sensed a change was needed, brining on the energetic Matt McKay for Mark Milligan in midfield and it helped the Green and Gold get back in the ascendancy.

It almost paid immediate dividends as Luongo’s curling left-footed effort looked headed for the far corner if not for a diving fingertip save from Naser with 20 minutes left.

While UAE didn’t throw in the towel, the Caltex Socceroos were able to see out the remaining minutes with a minimum of fuss.

Job done and Australia was into the AFC Asian Cup final on home soil a few days later against Korea Republic for what turned out to be an even bigger celebration.

So what will happen next Wednesday morning (AEST) when the Caltex Socceroos and UAE meet again with FIFA World Cup qualification points at stake in the heat of Abu Dhabi?