Sydney FC have bolstered their defensive stocks with the club announcing the signing of Caltex Socceroos defender Alex Wilkinson on a two year contract.

The AFC Asian Cup 2015 winner boasts a vast array of international, domestic and continental experience, having claimed two K-League classic titles with Korean side Jeonbuk Hyundai Motors in 2014 and 2015, as well as 16 Socceroos caps.

Wilkinson was included in the Socceroos FIFA World Cup 2014 squad in Brazil under Ange Postecoglou and played in every minute of Australia’s three group matches against Chile, Netherlands and Spain. 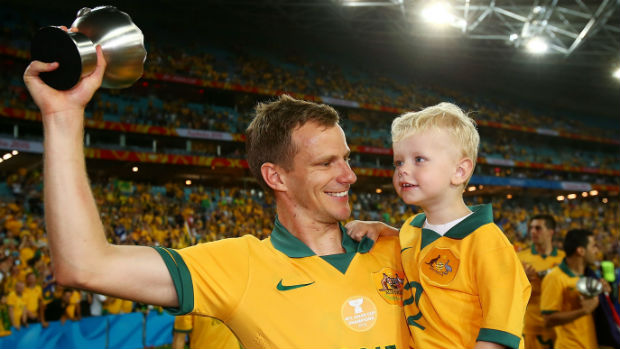 The central defender was also voted in the K-League best XI in 2014 and said he was looking forward to representing his home city in the Hyundai A-League.

“It feels great to be coming back to Sydney and playing for the club that represents my home city,” he said.

“Sydney FC is a huge club and I have no doubt we will be challenging for the title next season.

“There are a core group of very good players at the club and next season I believe we will be more than capable of winning silverware.

“It’s going to be a great challenge for me and I can’t wait to link up with the squad.”

“Alex has great experience in all forms of football and brings with him a wealth of knowledge of the game having played in Australia as well as overseas and at international level,” he said.

“He was outstanding in the Socceroos World Cup campaign in Brazil and in the Asian Cup winning side last year and has an exceptional work ethic and leadership qualities.

“He will bring added stability to our back line and will help improve the game of our younger boys and those around him.”

Wilkinson, who hails from Ryde in Sydney, is expected to link up with his Sky Blues team mates shortly in preparation for the Socceroos games against England and Greece.  He will be available for selection in Sydney FC’s AFC Champions League 2016 squad should the Sky Blues progress to the quarter-finals.

Sydney FC 2016/17 Memberships on sale June. Register your interest by signing up at http://my.sydneyfc.com