At the Arena de Sao Paulo, superstar Jennifer Lopez sung the World Cup’s official song We Are One with rapper Pitbull and Brazilian singer Claudia Leitte as the crowd was treated to a glitzy show ahead of Brazil’s opening game against Croatia.

Over 600 performers were involved in a show that featured elements of traditional Brazilian culture before the Brazilian national team took the field to play Croatia in the tournament opener.

On the field Brazilian superstar Neymar survived a scare to score twice as the FIFA World Cup hosts came from behind to open the tournement with a 3-1 win over Croatia in Sao Paulo.

The poster boy for the tournament was perhaps lucky to only get a yellow card after catching the throat of Luka Modric with a stray forearm midway through the first half in Thursday's Group A clash.

Brazil trailed at that point, after Marcelo's early own goal, but referee Yuichi Nishimura decided to give the 22-year-old a yellow card.

Barcelona's young star quickly atoned for his foul with a 25-yard equaliser before slotting a controversial penalty – given after Dejan Lovren was adjudged to have brought Fred down – in the 69th minute.

Lovren's contact with the striker was minimal at best and goalkeeper Stipe Pletikosa got both hands to Neymar's spot-kick.

But fortune was with Brazil, as it snuck in, with the South American return of the World Cup – for the first time since 1978 – marked with a win for Luiz Felipe Scolari's men after the outstanding Oscar toe-poked in from 20 yards in second-half stoppage time.

While Brazil had the luxury of naming the same side that started last year's FIFA Confederations Cup final success over Spain, Croatia were without suspended striker Mario Mandzukic, forcing Nikica Jelavic to lead the line in his absence.

Brazil's first significant foray forward saw David Luiz's tame header saved, but the pressure was on them at the other end of the pitch.

Ivica Olic's header wide served as a warning for Brazil, and it was one they did not heed, as Croatia claimed a surprise 11th-minute lead.

Olic galloped down the left wing in space before crossing for Jelavic, and although he could only scuff a left-foot shot, his effort was inadvertently steered in by Marcelo from six yards.

Brazil's initial response was frantic and anxious, but they soon found their rhythm, with Neymar's run to the byline and subsequent centre causing panic, and almost the equaliser, as Oscar saw a 20-yard left-foot effort superbly saved by Pletikosa after Croatia failed to clear their lines.

Croatia's promising start was undone in the 29th minute, though, as Oscar, who did superbly in a cluster of players to find Neymar, watched his team-mate trickle a left-foot strike past Pletikosa and in off the inside of the post from 25 yards. 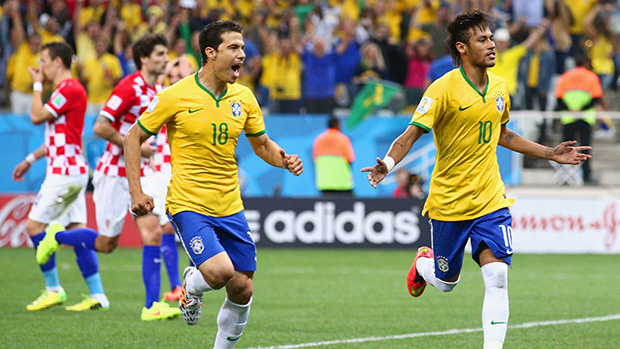 A lull was inevitable following half an hour of mayhem, but it lasted longer than expected, and although Brazil shaded the early stages of the second half, the best they had to show for it was a Dani Alves free-kick that sailed over.

That was until Nishimura pointed to the spot after Oscar's ball to Fred brought about slight contact from Lovren.

Neymar's stuttering run-up was far from convincing, but his effort crept in despite Pletikosa's best efforts.

A sublime Oscar cross nearly brought about Brazil's third goal, only for Luiz to head over, while at the other end, Croatia's hard luck was summed up by Ivan Perisic's disallowed goal, ruled out because of Olic's contact with Cesar that appeared minimal.

Modric and Vedran Corluka both went close as well, as Croatia mounted a late charge, but this was Neymar - and Brazil's - night.

And Oscar's composed finish capped a stunning performance from the midfielder, as the hosts raised hopes of a sixth World Cup triumph with an early win.