Korea Republic have defeated Australia 1-0 in a hard-fought but high-quality encounter at Brisbane Stadium to earn top spot in Group A and what should be an easier passage through the knockout stages.

Lee Jeonghyeop scored for Korea in the 33rd minute and, despite the Socceroos controlling the majority of possession, they were unable to break down a well-drilled Taeguk Warriors defence.

Some stunning saves late in the game from South Korean goalkeeper Kim Jin Hyeon enabled his side to hang on to all three points and group honours.

Australia will now stay in Brisbane to face China in the quarter-finals with a likely encounter with tournament favourites Japan waiting in the last four if they are to make it all the way to the Asian Cup final.

Questions will be raised as to whether changes should have been made to the Socceroos’ starting side ahead of the Group A decider.

Coach Ange Postecoglou made four alterations to his starting XI from the previous match, opting to rest the attacking trident of Tim Cahill, Robbie Kruse and Mathew Leckie in favour of Tomi Juric, Nathan Burns and James Troisi, while also reverting to Aziz Behich at left-back in place of Jason Davidson.

All three attacking players were introduced in the second half but were unable to find the breakthrough a desperate Australian side were seeking. 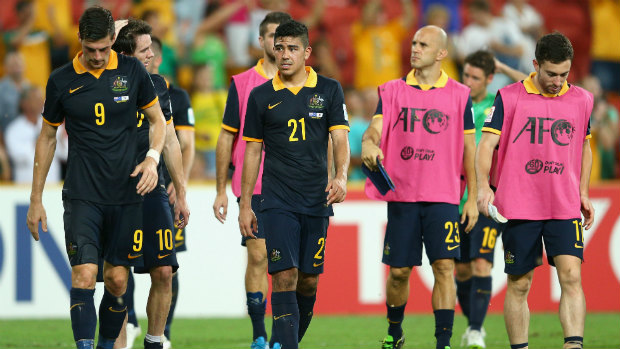 Some robust challenges throughout the game from the Australians earned the ire of Stielike, who was forced to withdraw Park Joo Ho in the first half and Koo Ja Cheol early in the second due to head knocks.

After a cagey opening quarter of an hour, South Korea had the first clear cut chance of the match when Kwak Taewhi out-jumped Massimo Luongo at a corner only to send his shot wide of the target.

The Australians hit back with two chances in quick succession, but neither Tomi Juric nor Nathan Burns could beat Kim Changsoo after creating space for themselves.

Ki Sung Yueng unlocked the game with a delightful pass from the left which released Lee Keun Ho, who crossed low for Lee Jeonghyeop to angle past Mat Ryan for the opening goal.

The Socceroos nearly found an equaliser moments later after a superb run from Massimo Luongo, but Troisi could not finish the move and found the side netting instead.

The home side continued to create chances late in the first half but the Koreans looked threatening when they broke out of defence in rapid counter attacks, but the teams remained separated by the single goal at the break.

The feistiness of the encounter went up a notch after half time, with tensions threatening to boil over on several occasions.

It was the South Koreans who were in their comfort zone with the scoreboard in their favour, sitting back in a tight defensive formation and allowing skilful midfielders Ki Sung Yeung and Son Heung Min, who came on in the second term, to probe forward.

Burns almost found a way through when he went on a winding run through the defence, only to be thwarted by an excellent Kim Jin Hyeon save.

Kruse slalomed his way thought the tiring South Korean defence in the 88thminute, but he too was denied by the brilliance of the keeper.

Despite the aerial threat posed by substitute Cahill, South Korea hung on to claim all three points.

The Socceroos will face China PR in the Quarter-Finals of the AFC Asian Cup at Brisbane Stadium on Thursday 22 January (8.30pm local kick off). Click here to purchase tickets.