The Koreans have yet to concede a single goal in five matches on the way to the decider, including a 1-0 win over the Socceroos in Brisbane in the group stage.

Despite drawing a blank in that match Ange Postecoglou’s side are still the tournament’s leading scorers and Davidson has no doubt they have the firepower to ensure a different result at a packed Stadium Australia.

“We had a few chances against them in the first game but unfortunately we just didn’t put those chances away,” said Davidson, who scored his first international goal in the 2-0 semi-final win over UAE on Tuesday night.

“We’ll definitely create those chances again and it’s up to us and it’s our job to make sure we’re clinical and we put them away.

“All the boys are trying to contribute as best as we can. We’ve had 10 [different] goal scorers which is a credit to all the boys.

“This is the business end and this is when you want to be winning games. We’re full of confidence and I’m sure whatever the game plan is we have to make sure we complete it as best as we can.”

After not starting in the tournament opener against Kuwait, Davidson appears to have nailed down the left-back spot ahead of Aziz Behich having started three of the last four matches.

Despite hardly playing with his English Premier League club West Bromwich Albion, the 23-year-old said he never doubted he could stand up to playing so many games during the tournament.

“I’m training with some world class players [at West Brom] and I had been doing a lot of extras because I knew the Asian cup was coming up,” he said.

“I didn’t play the first game but I’ve always worked hard and any opportunity to represent my country I grab.

“All I can do is do my talking on the pitch. I’m happy we got the win last night and kept a clean sheet. Ange picks the starting XI…it’s out of my hand for Saturday night.” 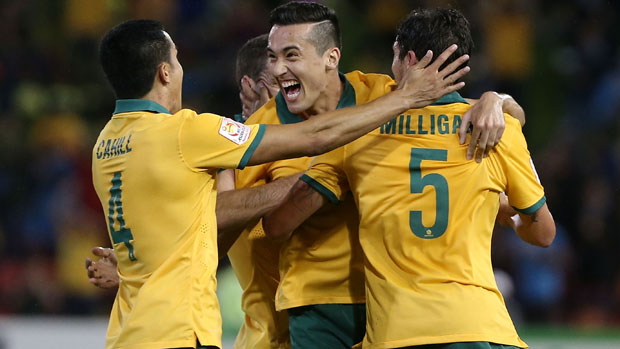 The Socceroos arrived at their Sydney base early on Wednesday afternoon, with the players who didn’t take any part in the semi-final win undertaking a fitness session later in the day.

Postecoglou will give the squad Thursday off the training park as well, with just one final session on Friday before their date with destiny on Saturday night.

With so many young faces in the squad, Davidson says any pressure that comes with playing such a huge match isn’t really affecting the squad but he’s sure it will ramp up once match day comes.

While he was a part of the World Cup squad in Brazil – and performed so brilliantly – Davidson says winning the Asian Cup would be the best achievement yet in his young career.

The Koreans have enjoyed huge support throughout the tournament but will undoubtedly be outnumbered by a huge Green and Gold army with 82,000 likely to cram into Stadium Australia.

Davidson says it’s not only important for the Aussie supporters to turn out in big numbers but also in big voice if the Socceroos are to go one better than they did in the final four years ago.

“It’s going to be the 12th man for us. We’ve had some fantastic support during the group stage and the quarters and semi-final but we’re all looking forward to a packed house in Sydney,” Davidson admitted.

“I’m sure the supporters are going to be vocal and get right behind us. It’s going to be important because we definitely need their help with their support.

“Hopefully we can give them something to cheer about after the 90 minutes.”