Mitchell Duke scored one of the goals of the season so far during an instant A-League classic on Monday night.

The superb strike was Duke's second goal since returning to the A-League this year.

Kwame Yeboah sent Western Sydney Wanderers second in the A-League but that fact ought to be considered a mere sidenote after the Red and Black came from behind to beat Wellington Phoenix 4-3.

Yebiah's cool finish in the 84th minute after arriving into the fray as a substitute to give Carl Robinson's men the lead in a game they trailed three times before his eventual winner.

Having turned the game around the lead in the dying embers it appeared the Wanderers had thrown it away when Wellington's Israeli striker Tomer Hemed fired in a stoppage time snapshot only for that strike to be ruled out for offside following consultation with VAR. 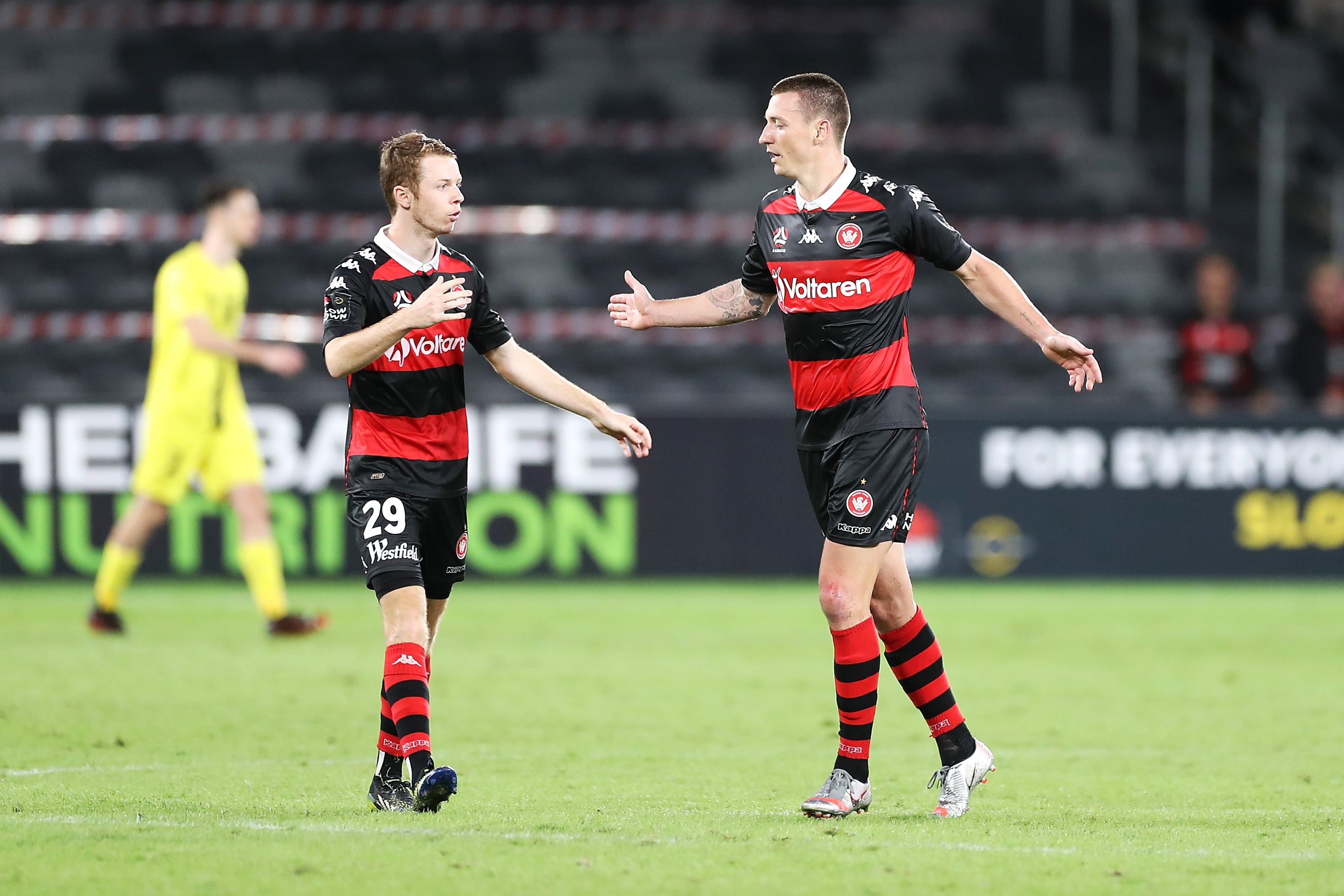 It left a crazed Bankwest Stadium to celebrate a remarkable 4-3 victory which sends the Wanderers six points behind leaders Central Coast Mariners, who drew 2-2 with Perth Glory on Sunday.

That did not look likely after Wellington deservedly took the lead through the magical Ulises Davila only for ex-Wanderers ball boy Daniel Wilmering to leather in a superb equalising goal.

But then another former Wanderers academy star stole the show when Cameron Devlin put Wellington back in front with a stunning half volley from distance after the Wanderers failed to clear their lines.

Jordan Mutch headed in his second goal in as many weeks to make it 2-2 shortly into the second, while Hemed notched his maiden goal in Australia with a sharp penalty take after a foul on Reno Piscopo.

Wanderers equalised via Mitch Duke's stunning control and volley seconds after Hemed's effort before Yeboah sealed the deal on an amazing encounter.

Wellington scored with their very first meaningful attack of the half, starting when Alex Rufer found Davila on the edge of the box, before Piscopo's return saw the Mexican playmaker clip the ball over Margus for 1-0 on 7 minutes. Another slow start for Carl Robinson's men, who have made habit of starting games poorly under their new manager's reign.

The quick wit and sharpness of Reno Piscopo and Davila ensured the Phoenix threatened to double their advantage but the Wanderers clung on and then fought back with a finish of sublime quality from an unlikely source. Bernie Ibini got to the byline and clipped it to the back post, Wilmering took a cushioned touch and caressed an emphatic half volley back across Oliver Sail for the equaliser.

A superb effort by all acounts from the youngster hitting his stride for the Red and Black once more after suffering an ACL injury last season, but Wilmering's strike would soon be eclipsed by a former Wanderers academy product. Devlin, who formerly plied his trade in the Wanderers academy and for Sydney FC in the A-League showed the Parramatta faithful a glimpse of what could have been after he unleashed an amazing half volley that seared into the top corner after Western Sydney could not clear their lines.

Robinson's men emerged from the half time interval charging with electricity and it did not take long for the hosts to equalise. It came when Mutch planted a fine header past Sail after rising to nod in James Troisi's corner on 52 minutes.

But those celebrations were entirely short lived when, from the resulting kick off, Duke cushioned Wilmering's ball forward with his chest before swivelling and dispatching a remarkable volley past Sail. A truly memorable goal from the returning Wanderers talisman.

Then, the Wanderers took the lead for the first time on 84 minutes. Tate Russell snapped into a challenge on Hemed as Wellington attempted to break away, before Bruce Kamau drove forward into the Phoenix half and fed Nicolai Muller. The German's cutback took a deflection and fell to the Yeboah, who placed a gorgeous first time finish into the corner.

There was one final sting in the tale - Hemed thought he had equalised in the very final minute of stoppage time, but the Israeli striker's goal was chalked off due to an offside call from VAR.