Both Germany and Brazil have been shocked in an incredible night of FIFA World Cup™ that left Mexico’s hero declaring this could be the biggest win in his country’s history.

Plus Serbia get their FIFA World Cup™ off to a winning start in the other game on Monday morning AEST.

Defending FIFA World Cup™ champions Germany have been stunned, losing 1-0 to Mexico in what has been described as “one of the biggest victory in Mexico’s history”.

Young winger Hirving Lozano scored the game’s only goal 10 minutes before half time after Germany were again caught cold on the counter attack.

Javier Hernandez raced through up against lone defender Jerome Boateng before squaring it to Lozano who cut back inside onto his right foot to finish into the near bottom corner.

It produced such pandemonium in Mexico City that ABC News has reported an “artificial earthquake” was registered, caused by “massive jumps during the goal from the Mexico national team”.

Germany were forced to push forward in search of an equaliser but were constantly denied by goalkeeper Guillermo Ochoa who produced nine saves in the match – the most saves made in a single match since 1966.

“I don’t know if it’s the biggest victory in (Mexico’s) history, but one of the biggest for sure,” goal scoring hero Lozano said after the match.

“It’s great to start on the right foot when you are playing the world champions.”

Mexico’s coach, Juan Carlos Osorio, also declared this a win six months in the making with his players going out onto the field without fear.

"We started drawing up a plan six months ago, we had to change some parts because of injuries, but basically using players who are very fast down the flanks," he told reporters after the match.

"We decided on (goalscorer) Hirving Lozano as he is our fastest player. We broke out in fast attacks, and we had numerous real chances to open the scoring before we actually did."

The loss for Germany makes it the third time in the last five FIFA World Cup™ tournaments that a defending champion has lost their first game – following France’s 2002 and Spain’s 2014 opening game losses.

Switzerland were the other country to pull off a shock in Russia, earning a 1-1 draw with another of the tournament’s favourites – Brazil.

The South American giants had taken the lead against Switzerland just 20 minutes into the match thanks to a sublime curling effort from FC Barcelona’s Philippe Coutinho.

Yet despite their dominance and weight of chances, Brazil were unable to double their lead and were pegged back five minutes into the second half by a Steven Zuber header from a corner.

Substitute Robert Firmino came closest to the winner for Brazil in the 90th minute when his free header from a Neymar free kick was parried away by Yann Sommer.

“Neutralising Neymar was a key ingredient of our game,” admitted Switzerland coach Vladimir Petkovic, after the Brazilian ace was fouled 10 times in the match.

Finally, a Aleksandar Kolarov free kick was the difference between Serbia and Costa Rica in Group E’s opening game.

The AS Roma left back curled a 25 metre free kick over the Costa Rican wall and into the top corner to give Europe’s lowest ranked participant a winning start to the FIFA World Cup™.

Boasting the second oldest squad in Russia, they were unable to muster a way back into the match after falling behind in the 56th minute. 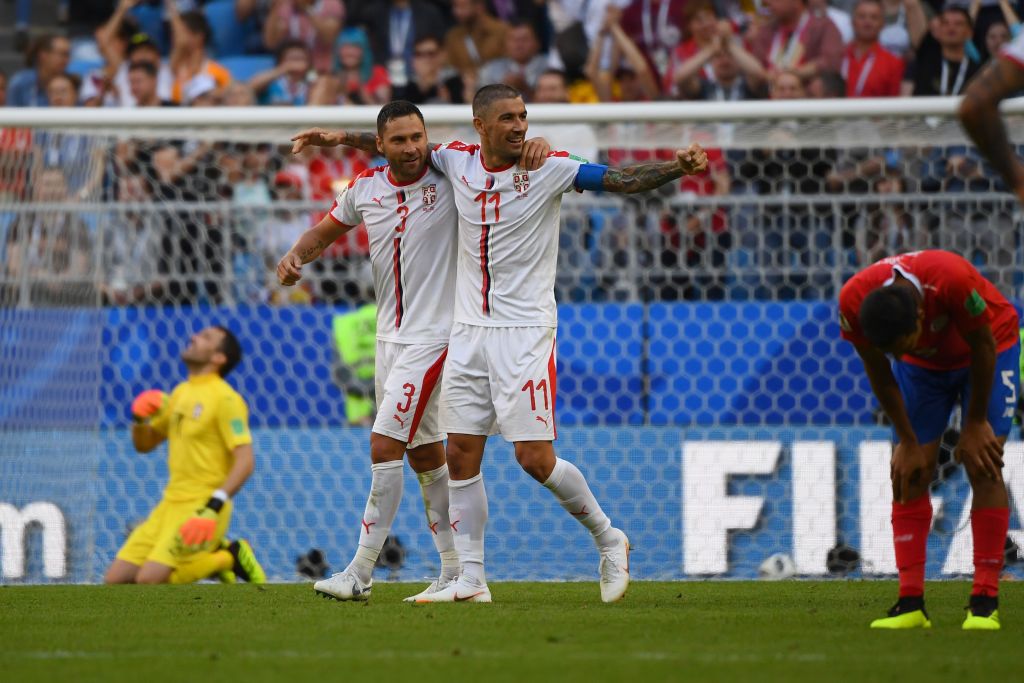