Opinion: The anguish and ecstasy of following the Socceroos' great journey

Contemplation can be so dangerous if you don’t have your wits about you, and there’s a lot of time for contemplation at a World Cup.

Players, team staff, families, friends, fans, referees, officials – all have more time than they really want. And so before Socceroos games on this adventure to parts widely unknown, there has been too much time for contemplation.

Big slick events like these are timed to the minute. Buses arrive at this time, warm ups must start and end at that time (to the second!). Be in the tunnel when we say. The pre-game playlist is timed to the very last beat, the same at all venues before all games. Players and coaches have to fit around this.

The man handed a six-month lease on the Australia side, Bert van Marwijk, fills his empty time in a huge 40,000-seat concrete monstrosity on the team bench all by himself. His players warm up and all he does is stare a stare which cuts right through you without a clue of what it’s about. Is he angry? Is he happy? Is he contemplating what type of bread to have with his next meal? No-one really knows with Bert.

Well, we do know it’s a stare of a man who doesn’t take crap, but the rest is a mystery which may never be solved.

His support staff either run the warm up or look on, hoping nothing goes wrong. There’s no such thing as a brilliant warm up. Only one that doesn’t go wrong.

Players, creatures of habit, go through their routine. The keepers play passes to each other, starting players shuffle feet quickly while substitutes Tim Cahill and Daniel Arzani, 18 years difference, bounce around like two mates from kindergarten re-united after school holidays.

Players’ families wait. Quarantined for the most part from loved ones they finally catch a glimpse, share a wave and an air kiss.

Fans are the lucky ones in all of this, because it is the ultimate case of all care and no responsibility.

Fans have other fans to solve all manner of problems with: ‘Timmy to start! Nah Timmy off the bench!’ … ‘Start the kid Arzani.’ … ‘We’ve got to find a spot for Mass Luongo.’

A moving roadshow of around 15,000 Australians is wrapped up in this productive, opinion-based lifestyle which may or may not involve the odd beer. And it’s brilliant.

As an Australian football fan, it’s easy to feel alone at times. When not trying to defend the viability of the sport to ‘outsiders’, football has a unique habit of self-mutilation. Not here. Not with every single Australian here wanting two things – Socceroos triumph and adventure.

Not to stereotype, but Australian fans are living up to a stereotype. Kazan before France was drunk dry, one night to the tune of Daryl Braithwaite who was flown in.

The same was attempted in Samara before Denmark, though the beer centre of Russia just held firm. Sochi, a holiday playground for Russians – think a Gold Coast without the bikies – is the present base as Peru looms and Sochi is being tested to the extreme.

As good as the times are, and as fascinating the jump is into a culture ridiculously misunderstood in the western world, there is one inconvenient football truth.

No answer has jumped from the bottom of any glass as to why, or how, the plucky Socceroos haven’t got more out of the two games that have passed.

So much to contemplate. 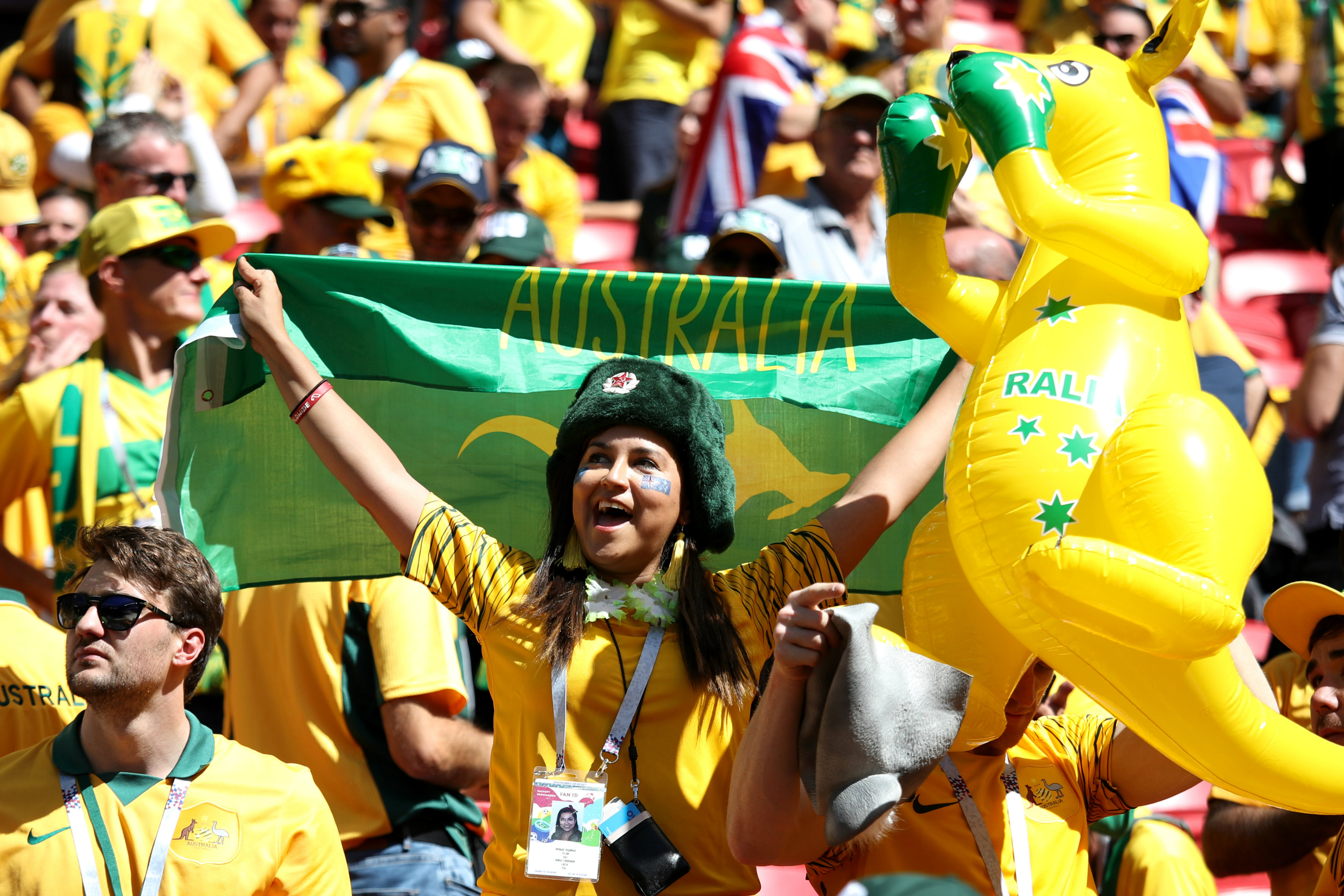 France in Kazan stung. They were there for the taking, or at least, there to take something from. Stifled by a game plan which based itself on caution, the French couldn’t unleash the moments where they could turn opposition mistakes into instant regret.

Kylian Mbappe, a 19-year-old with an abnormal amount of coordination and power, was kept just about quiet by Trent Sainsbury, who must be one of the best kept secrets in world football. Sainsbury is a bit like Kazan and its stunning architecture – very few outside of Australia know about him, but anyone who sees him can’t work out why more haven’t seen him.

Certainly, Sainsbury outperformed his French equivalent Samuel Umtiti, who plays for Barcelona. Sainsbury was last seen in club land with Grasshopper Zurich in Switzerland. Umtiti may well be a smashing lad who in his spare time chaperones the elderly across busy boulevards, but if there’s that big a disparity between their respective ability based on their club, well football truly is warped.

There was a few of those type of comparisons to be made. Corentin Tolisso, who blustered around in the centre of the park was bought 12 months ago by Bayern Munich for €41 million, or the entire A League salary cap combined … twice over.

A one off, yes, and there’s no point in banging on about it, really. But there is a point about fixing it though, ‘it’ being the general reputation of Australian players and it starts with qualifying for major tournaments where the world notices them and keeps tabs.

Similarly, there’s little point in whingeing about the little things that went against Australia in Kazan. The VAR intervention was followed by the FFW – flukey French winner – a double backhander.

The Socceroos got nothing from the game, except for the fans, who for the most part got on with life. A crowd gathered around a Steve Irwin impersonator outside the ground as he wrestled an inflatable croc and the Russian police laughed along.

Samara was the setting, a city that slips along the Volga River, once closed to outsiders because it housed the Soviet space program during the Cold War. A rocket still sits pointing upwards in the middle of town.

Before the Cold War was the Great Patriotic War. To us, it was World War II.

As the Nazi’s moved toward Moscow, Stalin moved the capital to Samara and built a bunker for a doomsday that never came, for he launched a counter-offensive the world is still astonished by.

In thankfully less dramatic times, with stakes of a totally different dimensions, little old Australia tried to respond against the Danes.

And again, it was hard to contemplate how more wasn’t won. Yes, the performance and effort and desire did us proud, but that cup is full.

Now we contemplate in Sochi, and to be brutally honest there’s worse places in the world to think. 30-degree days, squeezed in between the snow-capped Caucasus Mountain range and the Black Sea, dumped on by evening storms.

How do we get out of this group and extend the World Cup? How does Bert van Marwijk, so far leaning on caution as a dear friend, find goals? The actual question is a little more pointed, to be fair.

It is what international journalists are asking. The locals ask. Even an Armenian fan who was at the France game asked. “Ca-hill? Where??”

Bert knows more than just about anyone about football and has a plan. It’s a considered plan based on what he’s seen before and what he’s witnessing now.

The players are here now, welcomed to their training today but a mad bunch of Australians who feed off what the team does and what the possibilities are.

How loud will Peru’s fanatical support be?

So how do they perform even though they are out? Do they play their best? What do France need to beat Denmark by? Does Bert release the shackles? Do we need a miracle or is it just futile hope?

ADAM PEACOCK IS TRAVELLING WITH THE FANATICS IN RUSSIA