Ono: Australia is really the best place I have ever lived

Japan-based journalist Cesare Polenghi spoke exclusively to Shinji Ono about the difference between the A-League and J.League, and Japan's World Cup failure

In two seasons with Western Sydney Wanderers, Shinji Ono essentially became a club legend - as funny as that sounds at such a young club.

The playmaker scored 11 goals in 57 appearances in all competitions, helping the Wanderers to successive A-League grand finals, plus playing a key role in the team's run to the AFC Champions League quarter-finals. Despite that Western Sydney decided to let the 35-year-old former Japan international go at the end of last season with Ono returning to his homeland to play with Consadole Sapporo in the J.League 2.

But Ono doesn't seem to hold a grudge, describing Australia as the "best place" he has ever lived in this exclusive interview with Japan-based freelancer - and former Goal editor - Cesare Polenghi.

Cesare Polenghi - Since you were young, you were nicknamed "Tensai" ('Genius' in Japanese). How do you feel about that?

Shinji Ono - I'm not so sure myself. It is a bit odd but it never bothered me, to be honest. I am of course pleased to be addressed as genius but I don't necessarily think I am one.

CP - A couple of years ago Wesley Sneijder told me once he really hated to have to play against you when he was at Ajax and you at Feyenoord.

CP - In Australia as well, both supporters and journalists treated you like a very special player. Seems to me you have some sort of aura…

SO - Well in Australia it wasn't only me. It was the whole [Western Sydney Wanderers] team and the manager [Tony Popovic]. We did great and look at what's happening now in the AFC Champions League. It was great.

CP - By the way, I really wanted to ask you, how did you end up in Australia?

SO - Popovic invited me. 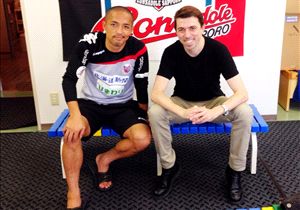 CP - You joined the A-League when Alessandro Del Piero and Emily Heskey also did but, seems to me, you were the one who got the highest ratings, in the end…

SO - Again, I don't think it was about me only but about the team. We did well and that's why we got rated highly.

CP - Weren't you at least a bit worried about joining Western Sydney? After all they were brand new team, founded just a few days before they signed you?

SO - My real worry was about myself. I hadn't played much in the months before joining Western Sydney, so I was concerned about being up to the task. But it was a great environment and great people, so it was really easy to fit in from the beginning.

CP - How was it for an Asian player to be with an Australian team?

SO - I never felt I was looked at as an 'Asian'. Australia is a multiethnic society. I never felt different. I was just one of the players of the team and I knew that doing my best was all I needed to be accepted.

CP - Speaking of differences between Asian leagues, we might agree that in general the J.League is more technical and the A-League is more physical. But is that all?

SO - To begin with the players in Australia are very tough mentally. And compared to Japanese players, they are training much, much harder.

CP  - I believe that in Japan, the whole J.League is as a big family, and there is great harmony between the players, the fans and the whole football environment. Is it the same in Australia?

SO - Well, for sure Western Sydney are like a family. In general, there is rivalry between clubs but it is not extreme, and like in Japan, supporters cheer for their team even if they don't win.

CP - What I am trying to understand is why Australian teams, especially Western Sydney, fought so much better than the Japanese teams in the AFC Champions League…

SO - I am not sure of what the reason is but as I said Australian teams train very hard, produce  a great effort. When they achieve good results, they then become more confident as well.

CP - I also have the feeling that some Japanese players do not necessarily pay much attention to their diet, their sleeping patterns…of course they train hard but I am not sure they are well-rounded athletes when compared to European players, or even Australians…

SO - Well, I really think that depends on the individual player. Some are working very hard, while some others aren't. There are many different people, you know… In general I don't think it is good when everybody acts the same.

CP - In this season's AFC Champions League you had the chance to play against two Japanese teams.

SO - Personally, I was very happy to play against Kawasaki Frontale and Sanfrecce Hiroshima. It was a good way to measure the level of Western Sydney. In general, people thing that the J.League is superior to the A-League but…

SO - (laughs)…right, and it was great that we could win. I am glad we forced everybody to change their minds.

CP - What can the J.League learn from the A-League?

SO - The intensity. Australian players will try to win every 50-50 ball. They have a huge desire to win. Your always get plenty of intensity in the A-League.

CP - Do you believe that comes from the Australian sport culture?

SO - Well, at Western Sydney it was because of our manager. Popovic is the kind of person who to always wants to win and hates to lose.

CP - And what about everyday life in Australia?

SO - I have lived in Japan and Europe as well but so far Australia is really the best place I have ever lived. I loved the environment, the clean air, the nature. People were very nice as well and I had no problems with food whatsoever.

CP - What about the language?

SO - I think that since I moved there, I have improved quite a bit. I believe that if you relocate to a foreign country you must learn the language and interact with the people. It is good that, for example, that today some Japanese players can even speak Italian and other foreign languages…

CP - So Australia was overall a great experience?

CP - And why did you decide to come back to Japan then?

SO - I am not sure. To be honest I did not get an offer to extend my contract in Australia and the chance to join Consadole Sapporo came at a good time.

CP - How is your impression of Japanese football, upon returning?

SO - Though I play in the second division, I really believe that the level has improved a lot.

CP - How different is from when you started playing in Japan, some 15 years ago?

SO - Very different. Back in the day there were many quality players but football in Japan in general is now much better organised.

CP - When you were a young player at Urawa Red Diamonds in the J.League, there were plenty of big names from overseas. Now just a couple at Cerezo Osaka. What do you think about this?

SO - Well, the past is the past and thougj it was great to have many top foreign players, times have changed and Japanese footballers have improved and are now very popular in Europe as well. I think we are at a point when there are cases of foreign players actually learning something from Japanese players.

CP - So much that all the best Japanese players are emigrating to Europe. This is great for Japanese football in general and for the national team but don't you feel that this impoverishes the J.League? It has become a 'feeding-league' a bit like Brazil and Argentina. All the best leave…

SO - For the league it is of course a huge minus and our local stars are badly missed but, in general, it is a good thing for Japanese football. Anyway, let me add that what matters is not only to go abroad but to be successful there!

CP - What do you think about your former club Urawa Reds?

SO - Petrovic brought over many players from his ex-team Sanfrecce Hiroshima. To tell the truth, I feel a bit as if the 'true' Reds are not there anymore. But they are a good team, with several good players, and now they're on top of the table. Still, if you ask me about playing style, rather than Reds I really like how Kawasaki Frontale play nowadays.

CP - Any player in Japan you really like? Who could be the next Shinji Ono?

SO - (laughs) Never mind the next Ono… I really like FC Tokyo's (Yoshinori) Muto, he is a very good player.

CP - Genki Haraguchi, just like you, grew up at Reds and this summer he left for Europe. Will he be OK?

SO - He is also a very good player and while he faces a difficult task, he can do very well at Hertha Berlin.

SO - Sure, this is the period when everybody feels they have a chance. If you do well, you might get called. This is great for the players. There are also many new faces, though that is no surprise…I really hope they do well.

CP - What did Japan need at the World Cup but could not achieve?

SO - With so many good players, they couldn't produce results.

CP - I feel Japan still lacks world class strikers and center-backs. It might be a size problem as well…

SO - Maybe but I am not sure. In the end, you can score goals anyway, but in general, at that level it is not easy.

CP - Speaking of challenges, how is Stefano Lilipaly doing here at Consadole?

SO - He is a really serious professional and always does very well in friendly games. He still hasn't got a chance to debut with the top team but he is always very dedicated. This is something even the Japanese players can learn from. And as a person as well, he is really nice, we speak in English, we're good buddies…

CP - To wrap it up, what are your plans for the future?

SO - I have two years of contract with Consadole Sapporo but I really like it here and I hope to stay longer.

CP - What about after retirement? Any plan to coach…?

SO - Honestly, I have no idea, I haven't thought about it yet!