Meet our Socceroo ‘pioneers’ from 1965

For our 1965 Socceroos - pioneers of the national team - their get-together in Sydney has brought back priceless memories for the players and reignited interest in the Socceroos' rich history.

The 1965 national team were involved in the first official World Cup qualifying campaign. And it was a tough and most unusual task in comparison to the Socceroos in recent years.

Training for four weeks in Cairns before heading to Cambodia to play North Korea - who went on to shock the world at World Cup 1966 – over two legs has been documented in the fabulous book ‘A History of Australian Football’ by Roy Hay and Billy Murray.

The 1965 Socceroos will get to meet the Socceroos of 2005 on Monday night in Sydney. It will be a special coming together of eras in the green and gold.

Two of the Socceroos of that '65 era were flying wingers Geoff Sleight and David Todd.

Speaking from a function to celebrate their reunion, the joyful pair was happy to reveal their memories on such a special day in green and gold history.

“This is everything for us. For whoever put this reunion together I’m eternally grateful. It’s been a long time coming but it’s here.

The Socceroos of 1965 story came after a period of isolation from the biggest tournament in the world.

“You have to remember Australia had been banned from playing in FIFA World Cups five years earlier. So once the ban ended they picked the best 20 players in the country for the qualifiers against North Korea in Cambodia,’ explained Sleight.

The two wingers were English-born and so had to be naturalised Aussies to play for their nation back then.

“In those days if you were a Pom you could get it [naturalised] after a year and became Australians,” he said.

“And when we went to Cambodia we were naive. If we had the knowledge then that we do now, things would’ve been totally different. We didn’t have preparation matches, we didn’t know the opposition.

Sleight added that if the Socceroos of 2015 played on the pitches they played on, with the preparation they had, there would not be much different between the ’65 era and the one 50 years on.

“I love them, the Socceroos. Always. [But] we were the first. And that cannot be rewritten. We were pioneers.” 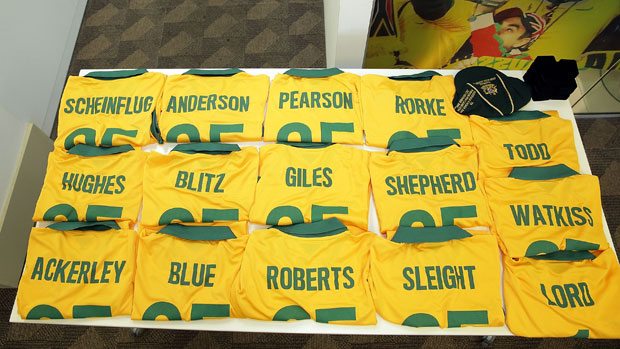 Todd added the reunion was special and may not be seen again, given the age of the “boys” as he calls them.

“It’s absolutely terrific. We had a reunion ten years ago and I saw the boys – well they’re not boys anymore but they’ll always be the boys – and we keep in touch. And we got our caps eight years ago.

“Today is pretty memorable because everyone’s a little older and a few more missing from last time, but it is part of growing old. I don’t think we’ll be meeting each other again.

“This will probably be the last time we have a get-together.”

As for the North Korea games, Todd pointed to the fact that most of their opposition had already played at least 20 caps and had been playing in the Russian leagues for up to five years.

“Their preparation was so superior to ours. We had 11 debutants. It was another world but in the second game we did a bit better.”

And in a nice twist, Sleight and Todd met the North Korean players at a reunion at Goodison Park in 2007, a venue which saw them smash Portugal to be 3-0 up inside the first 20 minutes before Eusebio’s side eventually won in 1966.

“They were there as part of a documentary being made about them. And we were invited to be there. It was amazing. And we met them all. There were only seven of their players left but Everton issued them with Everton shirts with their names on the back.”

Todd says Monday's reunion has revealed photos rarely seen and stories of the past that has ensured a special day for all.

"The bond is always there," Todd added. "And it's nice when people appreciate the contribution we've made to the game. I'm absolutely delighted to be here and I'll be sorry when it's all over. They've made us feel very important today."

That's because the Socceroos of 1965 are important and a treasured part of our national football history.