The masterstroke to exploit Denmark in biggest tournament trend

The Socceroos are still alive at the FIFA World Cup™.

Bert van Marwijk’s side had to get a result out of the Denmark game, and did just that – earning a 1-1 draw while France topped Peru 1-0 in Group C’s other match.

It leaves the equation delicately poised and Australia knowing exactly what needs to happen on Wednesday morning, 12am AEST.

The Socceroos must beat Peru and hope France beat Denmark by enough to put the green and goal through on goal difference.

EQUATION: What must happen for the Socceroos to qualify for the Round of 16

Intriguingly, the Socceroos have got themselves into this position – still a strong chance of progressing – thanks to two Mile Jedinak penalties.

It’s a trend that highlights the key strength of the Socceroos and one of the more intriguing plotlines of the FIFA World Cup™.

From Australia’s last 14 goals (excluding own goals), seven have come from set pieces. To further highlight the importance of set pieces to the Socceroos, both of Jedinak’s penalties this tournament were won directly off set pieces. 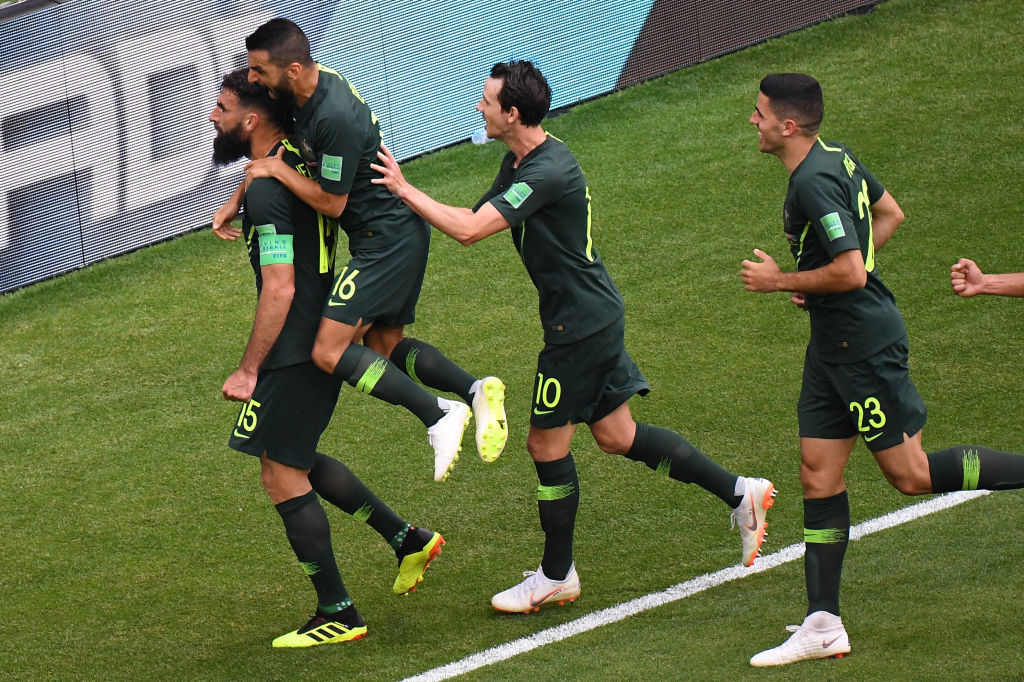 It’s easy to understand why this is one of van Marwijk’s side’s best routes to goal – with Aaron Mooy’s pinpoint accuracy and targets such as Andrew Nabbout, Trent Sainsbury, Mile Jedinak and Mathew Leckie to aim for.

But it also continues a key trend of this FIFA World Cup™ as a whole.

Jedinak’s penalty against Denmark, won after Yussuf Poulsen handled a goal-bound Leckie header, is the 11th spot kick awarded so far in Russia.

To exploit this key area, the Socceroos profited from clear analysis of Denmark’s weak spots, an effective plan to exploit it and perfect execution of the runs and delivery.

HOW AUSTRALIA EXPLOITED DENMARK FROM CORNERS

Denmark’s set up from corners was clear inside five minutes when Leckie so nearly put Australia ahead.

With all 11 players back to defend, the Danes had:

Denmark’s set up immediately left Mathew Leckie unmarked, with the flying winger the main target for all first half corners to great effect.

Importantly, there were certain movements from Socceroos teammates that helped Leckie exploit this space.

Nabbout was key to this, acting as a blocker to prevent Jorgensen from attacking the ball.

For the first two corners, Nabbout was marked in front of Schmeichel. As the ball was being delivered by Mooy, the former Newcastle Jet darted in front of Jorgensen and then backed into the Dane to prevent him from attacking the ball. This stopped Jorgensen from performing his sole role as a zonal player.

Further out, Australia’s runners moved to free up Leckie to attack the ball.

Jedinak and Milligan both made near post runs, getting in front of Jorgensen (who couldn’t jump) at the near post. Sainsbury then made a run to the centre of the box to allow Leckie to follow unmarked in his trail.

The outcome of this movement was clear from the first two corners of the game.

In the fifth minute, Mooy’s first delivery, Leckie won a free header seven metres out. It was so nearly advantage Australia, with the Hertha Berlin winger getting into the space between Jorgensen and Poulsen.

The second corner, after Denmark had taken the lead, saw the identical picture, with Leckie again free but Mooy’s delivery was scrambled clear at the near post.

By the fourth corner, both Jorgensen and Poulsen had readjusted their starting positions – starting two metres higher in the box, in part to prevent Nabbout from continually blocking Jorgensen out of the game.

But in taking a higher starting position, this meant Jorgensen had a shorter run up to attack the ball at the near post.

That tweak from Denmark was coupled with Sainsbury opting to stay out of the action, drifting instead to the back post which resulted in even more space for Leckie to attack the ball.

With Jorgensen out of the game, Jedinak and Milligan dragging their man-markers to the near post and Sainsbury dragging his man-marker to the back post, it left the perfect picture for Australia.

Leckie, who boasts a phenomenal vertical jump, was free to attack the ball, which forced Poulsen to desperately scramble to make up five metres from his starting position to challenge for the ball.

It was a contest Leckie was always going to win and the result was perfect: Poulsen, in his desperation, left his arms flailing and blocked Leckie’s goal bound header. The Video Assistant Referee intervened and Australia scored their second penalty of the tournament to keep their hopes alive.