Socceroo great Harry Kewell says the Socceroos are on the right track as they continue their qualification journey for Russia 2018.

Speaking to FIFA.com the retired Socceroo, now coaching Waftford’s U-21s, reflected on his own career and the next generation of stars in the green and gold.

“We played [at the 2014 World Cup] in Brazil, and everyone said, ‘We were unlucky, we had a hard group’. Rubbish. You’re playing in the World Cup, you’re not going to play easy teams. 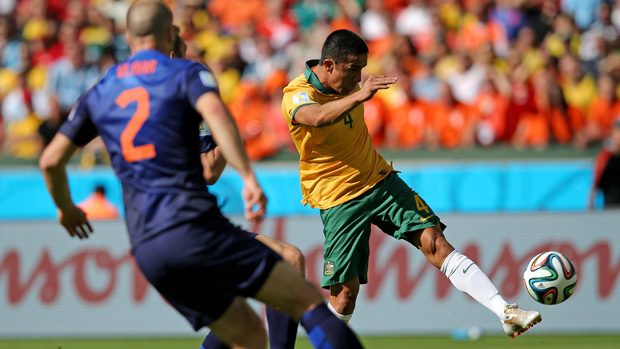 “We did well but the players wanted more. What Ange [Postecoglou] did, is that he took that, learned from it and applied it to the Asian Cup.”

Kewell, a former Joey from the 1995 side 20 years ago, will be watching on in the coming days and weeks with the current national U-17 side leaving Sydney today for Chile’s U-17 FIFA World Cup.

“South Americans have the flair, Europeans have that technical ability – but Australians have raw talent.

“They must go out there, play to a structure, but the coach must allow them to be natural and express themselves. If they can do that, then anything can happen.”

“I think it’s a good sign that Viddy is in there,” Kewell said when asked about coach Tony Vidmar.

“From what I understand I think he will be very organised, playing the right kind of football. Maybe not taking too many risks and just doing the simple things.

“Hopefully he does have a few ‘off the cuff’ players that he can give the licence to and showcase their ability.”

As for present day, Kewell is revelling in his role at Watford. Clearly coaching is the next step for this highly respected former Socceroo who says the role is ideal for his budding new life on the sidelines.

"I’m like the Cheshire Cat [at Watford] - my smile is from ear-to-ear. I’m in the best league in the world and I’m learning every single day.

"I can’t ask for a better start to my career, I’ve just got to make sure I grab it with both hands.”