The Joeys have notched a 3-2 friendly win over Uzbekistan as the squad finalises its preparations for the AFC U-16 Championship in India.

Three goals inside the opening 20 minutes did the damage for the Aussies, with Tony Vidmar's side set to kick off the tournament against Kyrgyzstan on Friday.

Australia opened the scoring with skipper John Roberts profiting from a poor turnover before slotting past the Uzbekistan goalkeeper.

Louis D’Arrigo doubled the Joeys’ advantage on 14 minutes with a strong header after a neat interchange down the right flank.

Uzbekistan were able to pull a goal back just two minutes later after the Aussies turned the ball over playing out from the back.

But Bryce Bafford restored the Joeys’ two goal cushion a short time later, with the youngster reacting quickest after the keeper failed to deal with a corner.

Both coaches made a raft of changes at half time and a more disjointed half of football ensued, with Uzbekistan pulling a goal back on 66 minutes.

In the end Australia were able to close out the match, with every member of the 23-man squad being given some minutes on the pitch. 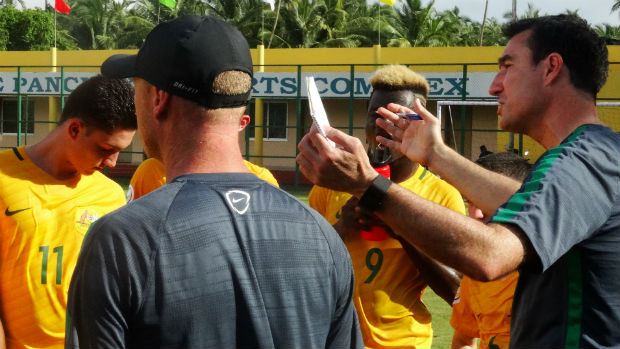 "It was our first and last hit out before the tournament starts and a great opportunity to give all the players some game time, while they're all still acclimatising to the heat," said coach Tony Vidmar post-match.

"The first half was excellent. We played a high tempo and put Uzbekistan on the back foot right from the start. We created chances and scored some quality goals.

"Only downside was that we let them back in the game by conceding a poor goal.

"The second half was disappointing. We made a number of changes at half time and gave every player a chance to put their hand up for selection in Friday's game.

"The tempo dropped and we made too many turnovers whilst not even under pressure. There was not enough intent shown to win the ball back when we lost it.

"However there were also plenty of positives and learning moments to take out of the game."

The Joeys are hoping to qualify for next year’s FIFA U-17 World Cup, which is also being staged in India, by reaching the semi-finals at the AFC U-16 Championship.