Joeys to bounce back against Mexico

The Joeys' Josh Laws has issued a rallying call to his Aussie teammates to redeem themselves against Mexico after losing to Germany in their FIFA U-17 World Cup opener.

Despite the loss to the 2015 UEFA European Championship runners-up, Laws was adamant the Joeys are a resilient group.

The final scoreline was not an accurate reflection of the match, says Laws.

“Obviously we’re disappointed by the result,but we showed a lot of promise in the Germany game,” Laws said.

“We held a lot of possession, and created a lot of chances, and we’re not letting the final result affect us.”

The 17-year-old midfielder is a recent addition to the Australian talent pool.

He was born in Glasgow, Scotland, before moving to Sydney when he was just five.

Laws spent his formative footballing years in Australia before emigrating back to the UK when he was 14.

He only received his first call-up to the Joeys in June this year when he travelled to Canberra for a three-day training camp.

Since then, he’s been a mainstay in the squad, impressing in a European tour in August, before sealing his place in the FIFA U-17 World Cup Chile squad.

Laws – who plays his club football with Fortuna Dusseldorf in the U-19 squad – started in midfield against Germany, before he was shifted to defence in the second half. 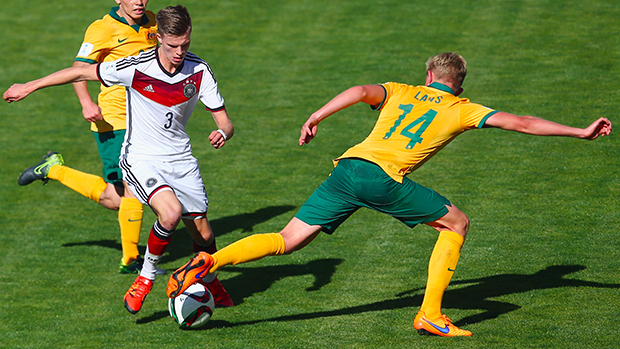 He impressed in both roles, particularly when the Joeys took control of large periods of the second half.

“In the situation, and with our tactics in the second half, I’m always happy to play whatever role is better for the team," Laws said.

“And when you're naturally a midfielder, you can adapt anywhere pretty easily.”

Laws said the Joeys wouldn’t let the result in the first match shake them, heading into their second group game against Mexico.

“We’re going in with the same positive attitude as when we started, and we’ll see where it gets us.”

A win in either of Australia’s remaining two FIFA U-17 World Cup group stage games will put the Joeys in a strong position to qualify for the next stage of the competition.

The top-two placed teams in each group will automatically qualify for the Round of 16, while the best four third-placed teams from across the six groups will also advance.

People living in Australia can watch all the action from Estadio Nelson Oyarzun Arenas, Chillan live and exclusive on SBS ONE from 6.45am AEDT on Thursday morning.