The Futsalroos’ dream run at the 2015 AFF Futsal Championship is over after suffering a heartbreaking 5-3 loss to Thailand in the final in Bangkok overnight.

The Aussies took the lead in the 28th minute through Jarrod Basger before a rampant Thailand netted four goals in quick succession to take control of the contest.

Australia pulled two goals back in the second half to set up a thrilling finish before Thai star Kritsada Wongkaeo netted his third goal of the game in the dying stages to seal the victory. 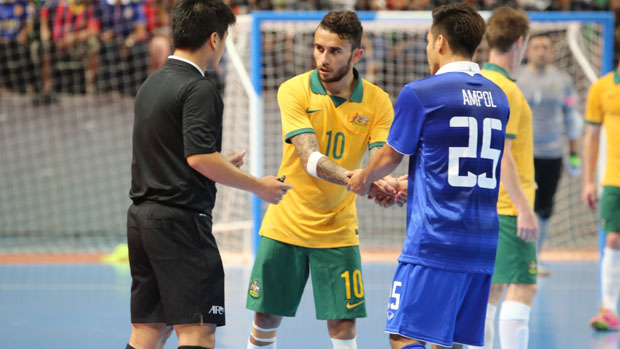 Robert Varela’s side headed into the final in scintillating form, winning all four of their group matches before brushing aside Malaysia 6-2 in the semi-final.

A capacity crowd of more than 12,000 packed out the Bangkok Indoor Arena to witness a repeat of the 2014 final, which Thailand won comfortably 6-0.

But after riding their luck in the early stages, it was the Futsalroos who opened the scoring in the 28th minute with Jarrod Basger finding the net after a neat interchange with Daniel Fogarty.

Thailand responded almost immediately with two quick goals before appearing to wrap up the contest with another two goals deep into the second stanza.

Australia refused to lie down and hit back through Jonathan Barrientos in the 36th minute before Daniel Fogarty set up a grandstand finish with a goal with less than two minutes remaining.

But as the Aussies pushed forward in search of an equaliser, Thailand pounced on an error in midfield with Kritsada Wongkaeo converting from close range to seal the result in the final minute.