Gutsy Socceroos go down to Chile

The Socceroos recovered from a disastrous start to push Chile to the limit with a brilliant comeback but it wasn’t quite enough going down 3-1 to the Chileans in Cuiaba.

Goals to Alexis Sanchez, Jorge Valdivia in the opening 15 minutes had Chile in the ascendancy before Cahill got the Socceroos back into the game with a perfect header shortly before the break.

The Socceroos powered through the second half dominating their more fancied opponent pushing for the equaliser but could not find a way past the Chilean keeper.

In time added on, with the game stretched and Australia pushing forward, Jean Beausejour powered home a third goal to finish off the match.

It was a Socceroo display that showed great courage with Cahill superb leading the line up-front.

But there were heroes across the park with younger Socceroos stepping up against a very good Chile.

In bad news, however, Ivan Franjic came off injured early in the second half with what’s thought to be a hamstring injury.

It was a cagey opening few minutes with Chile looking to exploit Australia down the flanks before the game exploded into life.

Sanchez profited from poor defensive work in the box found the ball and he slid home the opener on 12 minutes.

And before the Socceroos could catch their breath, slick lead up play and Valdivia found too much space to curl home goal number two from just inside the box.

Australia was under huge pressure against a rampant Chile as the game looked to be slipping away.

But the Socceroos steadied after the frenetic opening stanza and got back in the match.

Franjic won the ball high up the pitch and from his resulting cross Cahill hung in the air brilliantly to power home his header.

The Socceroo talisman has now scored at the last three World Cups. The goal had the Australian fans on their feet and the Socceroos back in the game.

However, Cahill’s yellow card for an incident in the box the only sour point to a good end to the half.

It ended 2-1 at the break with the game’s momentum swinging towards Australia.

Franjic picked up a knock in the opening minutes of the second half and his game was over forcing a reshuffle with Ryan McGowan coming on for Australia at right back.

And shortly after, Cahill had the ball in the net with a low header but it was judged offside as the game opened up. 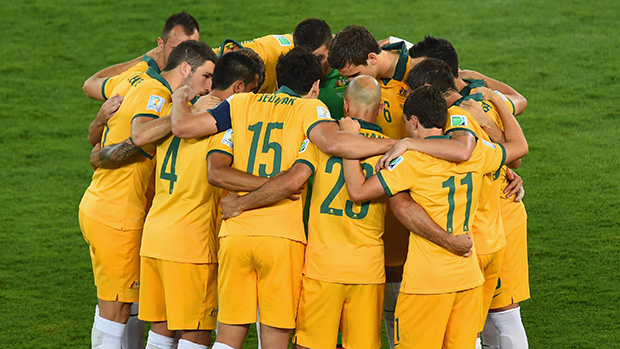 The Aussies were on fire with Bresciano’s brilliant effort pushed wide by Chile’s keeper Bravo following yet another good cross from wide left.

Chile should’ve scored a third when Vargas dinked the ball past Ryan but Wilkinson cleared the ball off the line before Leckie’s brilliant ball set up Bresciano and his low shot flashed wide Chile’s post.

The game really opened up after the hour mark with Leckie going on a brilliant solo run that ended in the box but a tame shot had the Chileans off the hook.

Halloran came on for Oar with 23 minutes left as the Socceroos looked to exploit their pace wide.

Cahill again should’ve score with yet another brilliant header from a pin-point Davidson cross as the Socceroos maintained their dominance.

Spiranovic cleared a dangerous low cross with the game end-to-end as the brilliant Bresciano made way for James Troisi in the final stages of the match.

Cahill had a penalty shout in the final few minutes as the Aussie pushed hard with both sides clearly exhausted in the humidity of Cuiaba.

But Chile found space in the box in time added on and after a brilliant stop from Ryan, Beausejour powered home to finish off the brave Aussies.