Australian U23 National Team attacker Deni Juric, brother of Caltex Socceroos striker Tomi, believes the work that Ante Milicic’s squad puts in over the next seven days will play a big part in determining the team’s fortunes at the 2018 AFC U23 Championship in China this month.

Juric, who is currently contracted to Croatian heavyweights HNK Hajduk Split, was one of the first players to arrive in Shanghai for the squad’s pre-tournament camp, which will include an international friendly against Thailand in Shanghai on Saturday.

The versatile forward – who will room with Central Coast Mariners flyer Trent Buhagiar throughout the 2018 AFC U23 Championship – told Socceroos.com.au from China that everyone involved must treat each session with the utmost professionalism if the team is to excel on the continental stage.

“We have quite a new team here in China so it’s going to take some time for us to gel, but hopefully not too much (time),” Juric, who scored three goals and made three assists on loan at NK Solin in the first half of the Croatian league season, said.

“All the teams at this tournament are here for a reason, they had to qualify like us, so we cannot underestimate anyone.

“It’s always an honour to represent your country, your national team, so we have to be professional every session and give 110 per cent on and off the pitch while we are here,” he said.

The Australian U23 squad will hold their first training session in Shanghai on Wednesday afternoon (local time) as the players commence their preparations under Caltex Socceroos Assistant Coach Milicic.

Juric, 20, was part of an Australian Development Squad that toured Spain last year, and it was there that he featured against youth selections from Finland and Austria.

“That was a really good experience,” Juric added. “I don’t know what it’s like against Asian teams, but the European sides were a different level.”

“That experience (in Spain) should help me at this tournament,” he said.

Australia has been pooled in Group D for the 2018 AFC U23 Championship in China alongside Syria, Vietnam, and Korea Republic.

Milicic’s men will play all of their group games at the Kunshan Stadium in Jiangsu Province, and will require a top two finish in Group D to advance to the Quarter Finals of the competition. 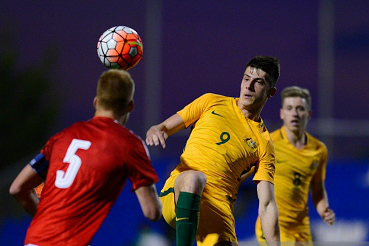 Earlier this week, Football Federation Australia (FFA) announced that all three of Australia’s matches at the 2018 AFC U23 Championship in China will be broadcast LIVE, EXCLUSIVE, and ad-break free during play on FOX SPORTS.