Caltex Socceroo debutante Milos Degenek will have a further chance to impress coach Ange Postecoglou after he was today added to the squad to take on Greece in the Dodoni Series in Sydney (June 4) and Melbourne (June 7).

Degenek, who plays his club football in Germany for TSV 1860 München, impressed on debut off the bench against England, his dangerous cross turned into the net by England defender Eric Dier for the Socceroos goal. He replaces the injured Matthew Spiranovic in the squad.

“It’s a shame that Matthew (Spiranovic) is unable to join us but I thought Milos did well against England and during training leading into the game,” Postecoglou said. “He was presented with an opportunity and took it so we’ll expose him to another 10 days in our environment and the two matches.” 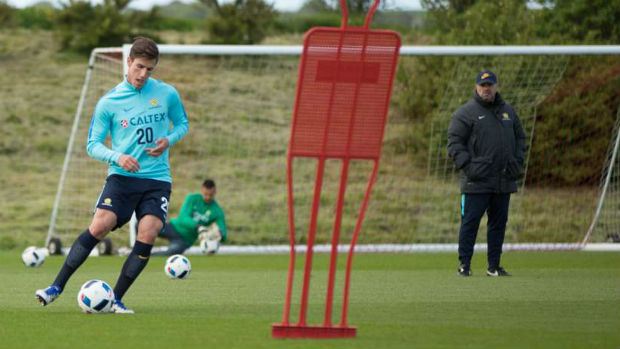 Postecoglou was looking forward to the Greece games after a strong performance against England where the Socceroos dominated for large parts of the match against the World No. 10 side preparing for the 2016 European Championships.

“Our performance against England was further proof that we are capable of matching it with the best teams in the world both individually and collectively and now we will push ahead and look forward to playing another high level European team, this time in front of our own fans in Sydney and Melbourne.

“As a team we are looking to continually evolve and improve but what is encouraging for me is that we are doing it by playing our brand of football, which is exciting for our fans to watch.

“Greece will be tough but we will play our game, take the match to them and hopefully give our fans a performance that gets them off their seats when we go forward.

“We did that in the first round of World Cup qualifiers around Australia and I’m sure a similar performance will see the Sydney fans create the tremendous atmosphere and occasion.”