Two Manchester giants stood in the way of our Australians in Premier League action overnight.

Read on to see how they went, and for a comprehensive weekend wrap of our overseas Australians!

ARZANI: How will he be used by the Scottish champions?

Two goals in two first half minutes from Glen Murray and Shane Duffy proved crucial for Brighton. Ryan was given no chance from Romelu Lukaku’s header, but the Seagulls regained their two-goal buffer via Pascal Gross’ penalty kick on the cusp of half time.

GALLERY: We showcase the best kits worn by our overseas Aussies this season

Ryan had starred between the posts in Brighton’s victory over United in May, and the Caltex Socceroos gloveman made a sensational diving save from Paul Pogba late in the day to preserve Brighton’s two-goal advantage.

SCROLL UP TO WATCH MATHEW RYAN'S INCREDIBLE SAVE FROM PAUL POGBA

The French midfielder did find his way past Ryan with a stoppage time penalty, but it proved to be a consolation strike only for Jose Mourinho’s side. 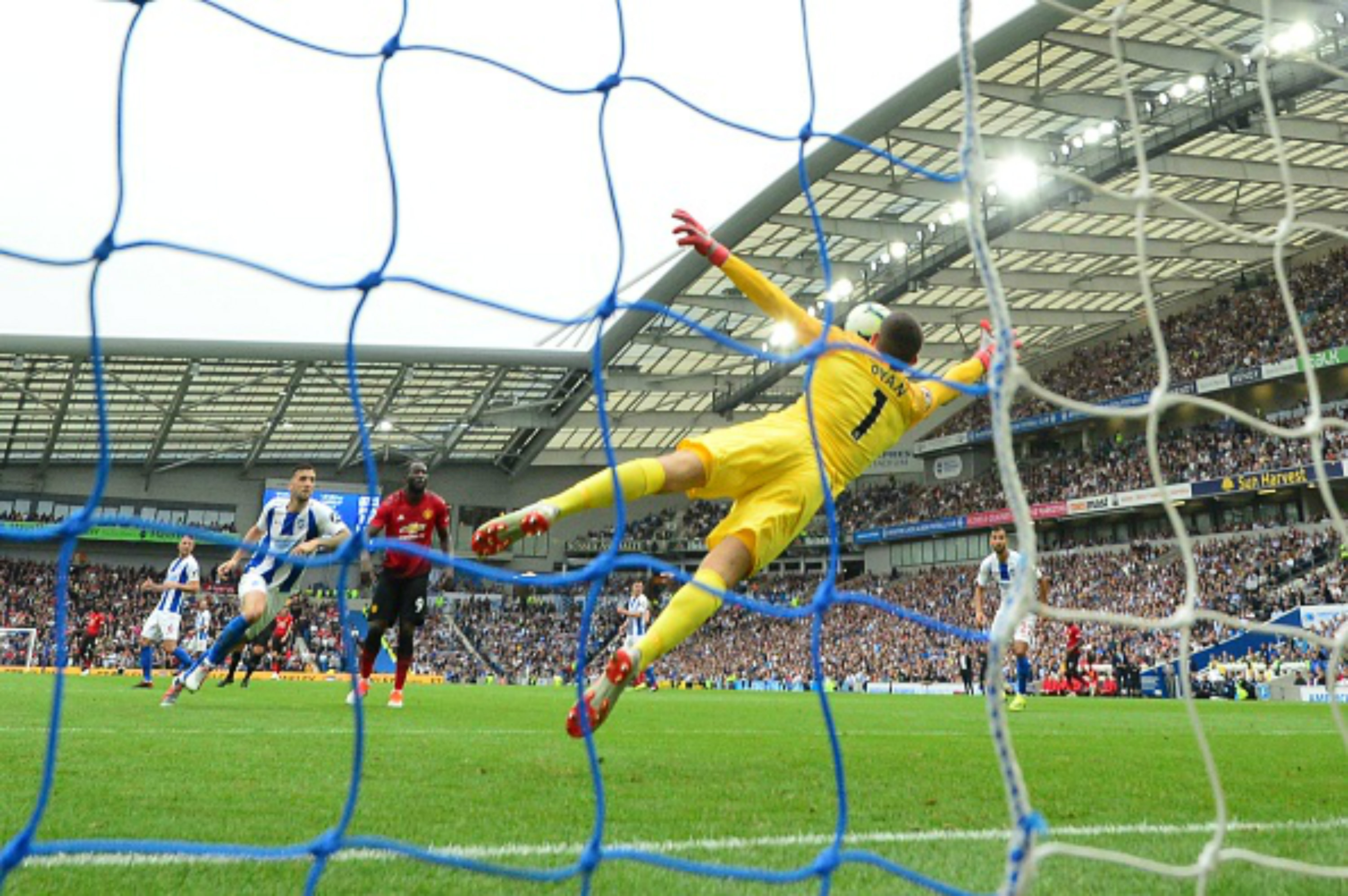 The Premier League fixture gods have not been kind to Aaron Mooy’s Huddersfield Town in the competition’s fledgling weeks.

After beginning the new campaign with an opening round defeat to Chelsea, a trip to the Etihad Stadium was next for Mooy’s Huddersfield.

But without their talismanic Australian midfielder, Huddersfield were outclassed 6-1 by the reigning Premier League champions.

Sergio Aguero claimed a hat-trick for Pep Guardiola’s side – his 13th career treble for the Manchester club – to consign the Terriers to a heavy defeat.

However, the big loss for Mooy will have been offset by the birth of his newborn son. The Huddersfield midfielder was absent from the Terriers’ match day squad as wife Nicola went into labour, and Mooy posted a picture of his newborn son on Instagram earlier this morning.

“There are some things that are more important than football and that is the case for Aaron today,” remarked Huddersfield manager David Wagner.

In Scotland, Jamie Maclaren came on as a second half substitute and inspired Hibernian to a 3-2 comeback victory over Ross County in the Scottish League Cup.

While there was no debut appearance for recently-signed Caltex Socceroos midfielder Mark Milligan, a 90th minute winner from Daryl Horgan secured passage to the next round and made it all smiles at Easter Road.

Elsewhere in Europe, Danny Vukovic played 90 minutes as Genk came from behind to beat Sporting Charleroi in Belgium and James Holland played a full match for LASK Linz in a 2-1 win over Rapid Vienna.

Tom Rogic starred for Celtic as the reigning Scottish champions bounced back from their midweek UEFA Champions League exit with a 3-1 win over Partick Thistle in the Scottish League Cup on Sunday morning.

With new signing Daniel Arzani not quite ready to feature, Rogic took centre stage for Celtic and added a match-sealing third goal after strikes from Leigh Griffiths and Moussa Dembele.

Heart of Midlothian also secured their passage to the quarter finals of the Scottish League Cup after Olly Lee helped the side to a 1-0 win over Dunfermline.

Ben Garuccio was in the thick of the action again for Hearts, while Oliver Bozanic was substituted on at half time and slotted into a deep-lying midfield role nicely.

James Meredith was on hand for Millwall’s 2-1 win over Derby County as the Lions produced one of the standout results of Sunday morning’s action in the English second tier.

Early efforts from Lee Gregory and Shaun Williams helped the Londoners establish an unassailable buffer over the Frank Lampard-managed Derby, who struck a consolation through David Nugent late on.

Up in the Midlands, Mile Jedinak played 90 minutes and partnered James Chester in central defence as Aston Villa drew 1-1 away at 10-man Ipswich Town.

Meanwhile, Jackson Irvine returned to the starting eleven for Hull City but it wasn’t enough to inspire the Tigers as Nigel Adkins’ side suffered a 1-0 defeat at home to Blackburn Rovers.

It wasn’t a happy evening for Massimo Luongo, who played a full game as West Bromwich Albion trounced Queens Park Rangers 7-1 at the Hawthorns.

Six second half goals from the Baggies put Luongo’s side to the sword, who currently prop up the Championship ladder after three matches.

Sainsbury on the bench for PSV, debut for Jurman

There was no PSV Eindhoven debut for newly-signed Caltex Socceroos defender Trent Sainsbury, who was on the bench as the reigning Eredivisie champions defeated Fortuna Sittard 2-1 with a 90th minute winner from Dante Rigo.

The former Central Coast Mariner signed for the Dutch powerhouse just under two weeks ago and will be on the hunt for his debut this Wednesday morning, when PSV take on BATE Borisov in their UEFA Champions League playoff first leg.

In Turkey, Aziz Behich played the full 90 minutes as Bursaspor were held to a scoreless draw against Kayserispor.

And finally, Matthew Jurman made his Al-Ittihad debut in a 2-1 loss to Al Hilal in the Saudi Super Cup.