Dario Vidosic has made a winning start to life in the Chinese Super League with Liaoning Whowin while there were important wins for fellow Caltex Socceroos in Asia over the weekend.

Vidosic was released by Western Sydney Wanderers and it was announced last week he'd join Whowin and was immediately brought into their starting side overnight.

And the 29-year-old put in a solid display for almost an hour before being substituted by fellow Aussie Michael Thwaite.

Whowin held on for a vital 3-1 win over Apostolos Giannou’s Guangzhou R&F, with the Socceroo striker also playing just under an hour of the match.

It was a vital three points for Liaoning, who leapfrogged R&F on the ladder moving up to ninth spot.

Elsewhere in the CSL over the weekend, Tim Cahill and Matthew Spiranovic both got through 90 minutes as their Hangzhou Greentown pulled off a major shock against second-placed Hebei.

Hangzhou defeated the CSL high-flyers 1-0 in one of the upsets of the season to boost their chances of avoiding the drop.

Elsewhere, Trent Sainsbury played a full game in the top-of-the-table clash against Guangzhou Evegrande, but his Jiangsu Suning lost 2-0 to remain in third.

It’s unclear if it was an injury which forced Burns from the field but Socceroo boss Ange Postecoglou will be hoping it’s nothing too serious with the final phase of FIFA World Cup qualifiers starting in September. 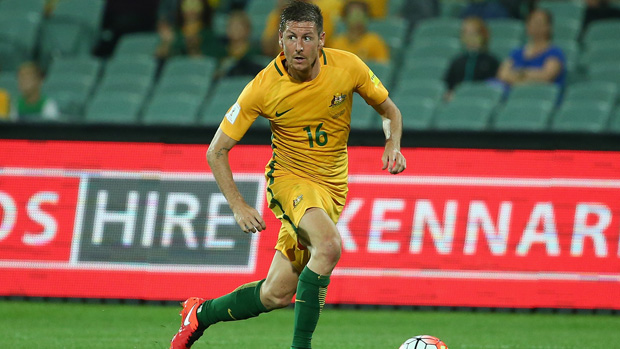 And in Thailand, Mark Bridge was in action for Chiangrai United, playing a full match as they lost 2-0 at Suphanburi.

Matt Smith also got through 90 minutes for Bangkok Glass, who came from a goal down at the break to beat OsotPutrajaya 2-1 to stay third on the Thai Premier League ladder.