But the Greek-born, Melbourne-raised Giannou - who started but was subbed off in the latter stages for Tim Cahill - said the friendly could’ve easily been a more emphatic for the home side.

“I’m happy the team won, even in the dying moments of the game.

“But I think if circumstances may’ve been different we could’ve come away with two or three goals,” the Chinese Super League forward told reporters on Sunday.

And the new addition to the Caltex Socceroos says he’s growing into his role and his new surroundings in the Green and Gold.

“I was happy from the first [Socceroo] camp I came into.

“I thought I’d made the right choice straight  away with this team. I felt like this is the place for me to be.” 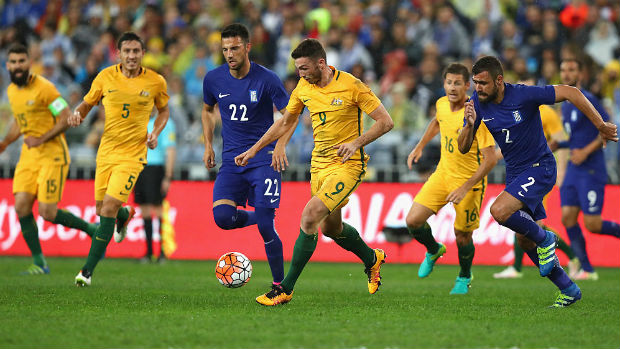 With the Greeks arriving only on Wednesday night, it was a strong effort from the visitors who almost held on for the win against Ange Postecoglou’s side.

But with a few extra days rest they’ll get a chance for a measure of revenge in Melbourne this Tuesday night.

Giannou knows a number of the Greek player well after his almost decade in the Greek leagues.

And despite an at times physical encounter at ANZ, Giannou played down any serious intent from the visitors ahead of Tuesday’s second and final meeting in the Dodoni Series at Etihad Stadium.

“There was a bit of banter even during the game and before but there was nothing serious. Just normal stuff…

“It’s a part of the game [the physical side] especially in my position.”

Giannou added: “It was a bit difficult for us to play the way we want to play due to the pitch, but the team tried to play the football that we’ve been practising all this time and to get the win, we did it.”

The Greeks will train on Sunday at South Melbourne’s Lakeside ground after the club’s NPL match.