The Socceroos have started their AFC Asian Cup UAE 2019™ campaign with a defeat, going down to Jordan 1-0 at the Hazza bin Zayed Stadium on Sunday night.

Despite dominating for large periods, Graham Arnold’s side were undone by Anas Bani Yaseen’s first-half header.

Australia laid siege to Jordan’s goal after the break but were continually denied what would have been a deserved equaliser by some desperate defending.

RELIVE: Socceroos go down to Jordan in AFC Asian Cup opener
SOCCEROOS PODCAST: Listen in to all the news and views
LIVE BLOG: Keep across all the latest from Socceroos camp
BROADCAST: How to watch Australia at AFC Asian Cup UAE 2019TM

Awer Mabil hit the post as the Socceroos created chance after chance in the second half, with Chris Ikonomidis, Jackson Irvine and Tom Rogic all going close.

But it wasn’t to be Australia’s day, with Graham Arnold’s side to now quickly turn their focus to Friday night’s second group match against Palestine.

The Socceroos enjoyed plenty of possession in the early stages, with Jordan content to sit back and denied Australia space around their box.

Awer Mabil was looking the most threatening and almost gave Australia the lead on 13 minutes, getting in behind the Jordan defence on the left but his shot was well stopped by the keeper.

The let-off seemed to give Jordan a boost and they would go on to take the lead on 25 minutes.

Bani Yaseen managed to break free from his defender at a corner, planting an unstoppable header into the top corner of the net.

And the Socceroos had keeper Maty Ryan to thank for not falling further behind soon after.

Bahaa Abdulrahman hit a rasping free-kick from the edge of the box which was headed for the top corner, only for Ryan to produce a stunning fingertip save, tipping the ball onto the crossbar and away.

Rhyan Grant replaced Josh Risdon at right-back at the break and Australia immediately got on the front foot as they chased an equaliser.

And it almost came just after the hour mark as Tom Rogic let fly from 25 metres out with his shot spilled by the keeper, before substitute Chris Ikonomidis just failed to turn in the rebound.

It began a period of concerted pressure from Australia as they pushed Jordan back and probed for an opening.

Rogic could have done better 19 minutes from time when he was on the end of Aziz Behich’s low cross, but the Celtic playmaker fired over the bar.

Australia went even closer soon after when Mabil made space for himself inside the box and rifled off a vicious strike which cannoned onto the post.

It was wave after wave of Socceroos attack now and Ikonomidis was again involved in the thick of the action, with his goal-bound header hacked off the line by a defender.

The Socceroos did have the ball in the net with four minutes left through Jamie Maclaren, only for the striker to be denied his first international goal by an offside flag.

Ikonomidis was denied again in stoppage-time as Jordan held on for a famous win. 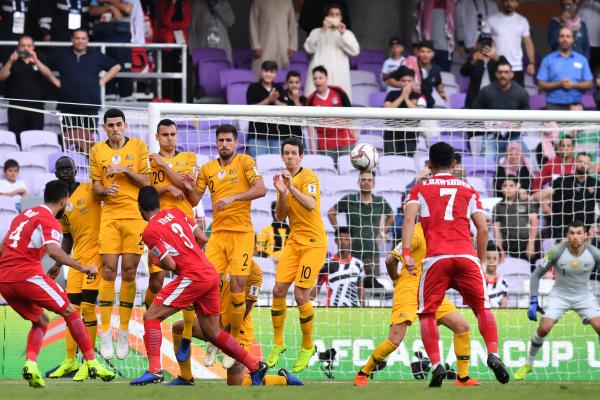 The Equation: All to play for in Group B after Palestine and Syria stalemate

The Socceroos may not have gotten the result they wanted against Jordan in the AFC Asian Cup UAE 2019?, but Palestine and Syria's stalemate, plus the fact there are still two matches remaining in the group phase, puts Australia in a position where everything is still to play for. 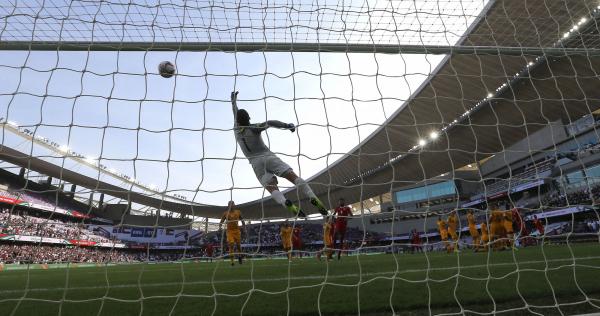 See the pick of the photos from Australia's 1-0 loss to Jordan on Sunday night in their opening AFC Asian Cup UAE 2019? Group B clash. The Socceroos take on Palestine in their second Group B fixture on Friday, January 11 at 10:00pm AEDT. ...PORT: Jordan defeat Socceroo 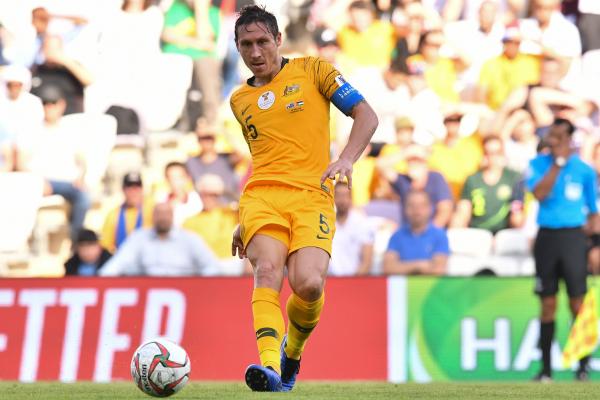 Skipper Mark Milligan is confident the Socceroos will bounce back quickly from Sunday night's 1-0 loss to Jordan in the AFC Asian Cup UAE 2019? opener in Al Ain. In a match Australia dominated for long periods, a first-half header from Jordan's Anas Bani Yaseen proved th 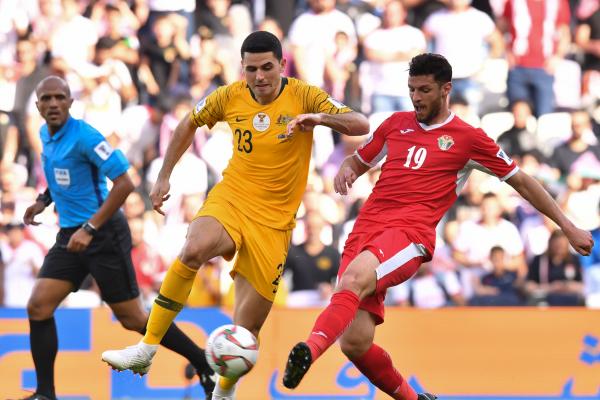 The Socceroos have started their AFC Asian Cup UAE 2019? campaign with a defeat, going down to Jordan 1-0 at the Hazza bin Zayed Stadium on Sunday night. Despite dominating for large periods, Graham Arnold's side were undone by Anas Bani Yaseen's first-half header. Australi 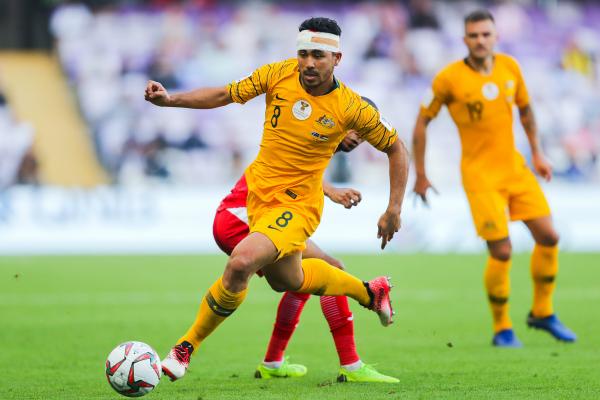 The Socceroos were denied a winning start to the AFC Asian Cup UAE 2019? after losing 1-0 against Jordan in Al Ain on Sunday night. Graham Arnold's side created a string of chances, especially in the second half, but were undone by Anas Bani Yaseen's first-half header. MATC 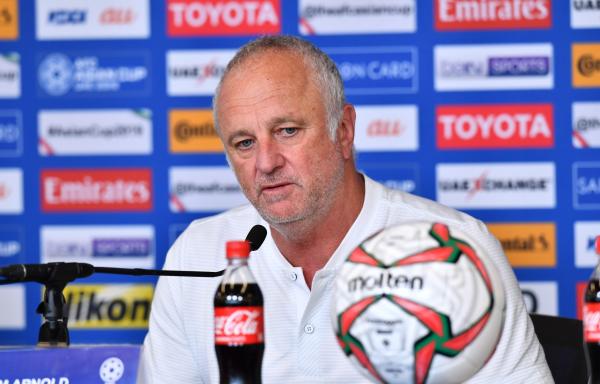 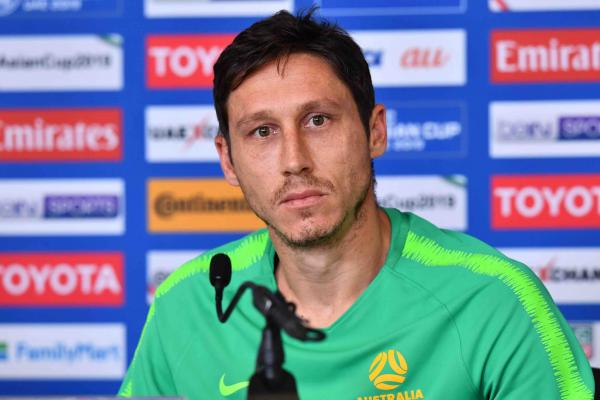 ‘We’re ready to get going’: Mark Milligan calls for a winning start from the Socceroos

The moment has arrived, and Socceroos skipper Mark Milligan is confident that Australia can get its AFC Asian Cup UAE 2019? campaign off to a successful start against Jordan on Sunday (10:00pm AEDT). 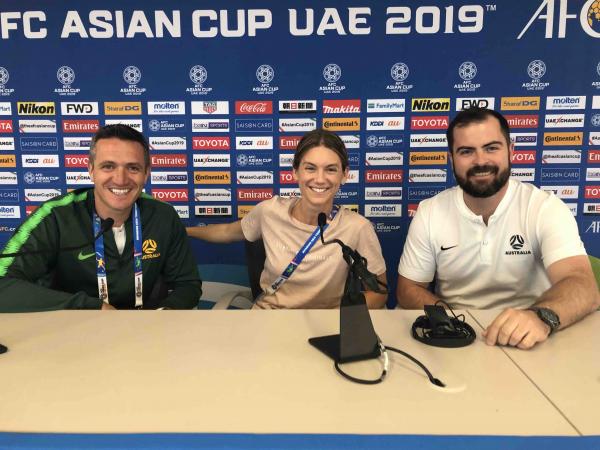 Listen in to episode one of the Socceroos Podcast - out now

There are more ways than ever to enjoy the AFC Asian Cup UAE 2019?, with the launch of the Socceroos Podcast the latest way to stay in touch with everything that is happening in the United Arab Emirates.  With the Caltex Socceroos kicking off their Asian Cup campaign against J 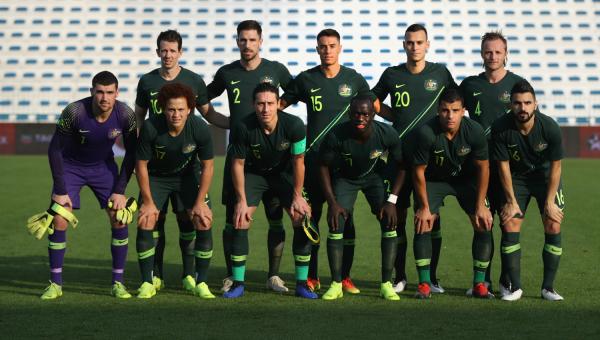 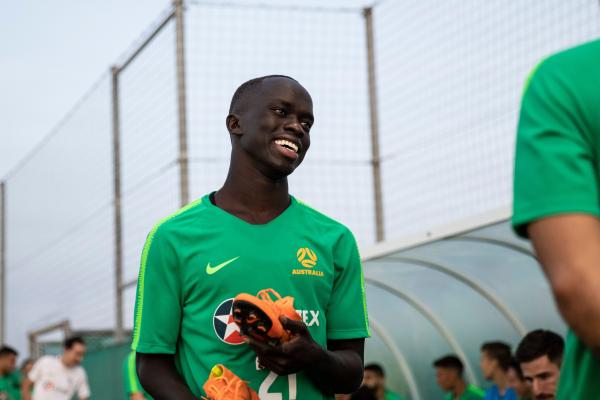 Livewire forward Awer Mabil has announced himself to Socceroos fans in recent months with some electrifying performances, as well as two goals in his four international appearances so far.  As the 23-year-old looks forward to Australia's opening match of the AFC Asian Cup UAE 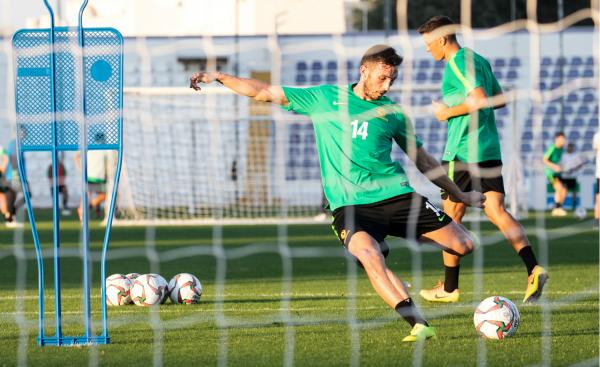 ‘I am really happy to be here’: Giannou delighted to be part of Socceroos' AFC Asian Cup UAE 2019™ campaign

It may just be the best 'Happy New Year' message that Apostolos Giannou ever gets.  The 28-year-old forward was relaxing at home in the early hours of the morning on January 1 when he received an unexpected call from Socceroos coach Graham Arnold.  Soon afterwards, the Melb 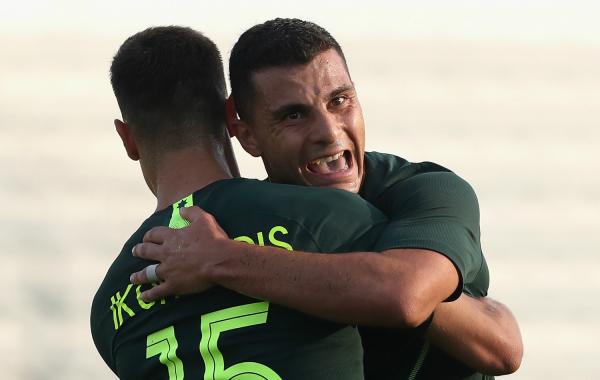 Socceroos forward Andrew Nabbout insists he has come back from his FIFA World Cup shoulder injury at "an even better level" as he sets his sights on helping fire Australia to success at the AFC Asian Cup UAE 2019?. The Japan-based player was forced off the field in the second