The Young Socceroos proved they're capable of competing with the world's best emerging talent, narrowly going down 1-0 to Brazil's U-20 side in Wollongong on Wednesday night.

Paul Okon's side were undone by a first-half strike from distance and despite Brandon Borello being sent off in the second-half were always in the contest against their South American opposition.

George Blackwood and Danny Silva had the best chances for Australia's U-20 side with their last touch letting them down with the goal in site in what was an otherwise polished performance from the Aussies.

A healthy crowd turned up to WIN Stadium to see the Young Socceroos play their second game in four days and they made a dynamic start to the contest with Borrello and De Silva both carving out half-chances.

Borrello sprung the off-side trap but was thwarted by Brazil's goalkeeper, while De Silva had a shot from distance that narrowly went over the bar.

Both sides showed a willingness to throw bodies forward in the opening exchanges, with Brazil making the most of an attacking foray to open the scoring with their first meaningful shot on goal.

With possession being contested on the edge of the Young Socceroos box the ball spilled out to Brazil's Joao Pedro, the defender unleashing a shot that flew into the top corner of the net.

The Young Socceroos were certainly not disheartened at going behind, continuing their up tempo passing game from the back and creating their best chance of the half through George Blackwood.

The Sydney FC striker ran onto an incisive ball from midfield to be one-on-one with the goalkeeper but his timid shot was parried away to the groans of the home fans.

Brazil's young samba stars started to assert themselves on the contest leading into half-time but a string of fine saves from Tottenham gloveman Tom Glover kept his side in the contest. 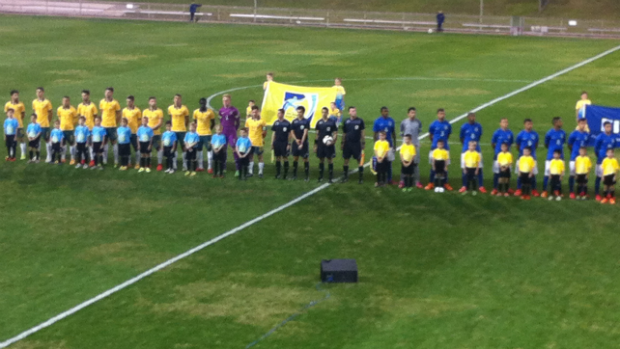 The Young Socceroos made two changes at the break with Alex Gersbach replacing Riley Woodcock and Jordan Holmes coming on in goals.

Holmes was immediately into the action after a raid down the left flank seemed destined to end in a goal but despite a throng of bodies in the way the Bournemouth shot-stopper was able to make an athletic save.

Some niggling challenges crept into the friendly as the match wore on but the referee was quick to act with Borello seeing red on the hour mark after a second booking for clipping Brazil's Alef.

Being down a player did nothing to unbridle the enthusiasm show by the Aussies as they continued to create several opportunities in search of an equaliser.

Danny De Silva had the best chance when he did it all himself, a deft touch and spin taking him around Brazil's defence but he was only able to fire at the goalkeeper.

At the other end Holmes was immense for the Aussies in goals, denying Brazil on several occasions as the score finished 1-0 to Brazil.