After being granted a bye through to the third round of AFC qualifying because of Australia's top-five ranking in Asia, the Socceroos were drawn into Group A against Qatar, Iraq and China PR.

The first match took place in Melbourne as the Socceroos brushed aside Qatar 3-0 thanks to goals from Josh Kennedy, Tim Cahill and Mark Bresciano.

The next match saw a 0-0 draw with China in Kunming. The Chinese were in camp for about a month in the lead and tried all the tricks to gain an advantage, playing the match in the altitude of Kunming. And it almost paid off as only a late penalty save by the brilliant Mark Schwarzer enabled Australia to escape with a hard-earned point.

Harry Kewell's second-half header earned Australia a 1-0 victory over Iraq at Suncorp Stadium in their next match but they once again had Schwarzer to thank for preserving the points.

The return match in the United Arab Emirates saw the result reversed as Iraq secured a 1 -0 win over the Socceroos courtesy of  Emad Mohamed's superbly taken goal in the 28th minute.

The Socceroos bounced back in their next game with a 3-1 victory over Qatar in Doha. Two Brett Emerton goals and one to Kewell sealed the win and a passage through to the next stage of Asian World Cup qualifying. 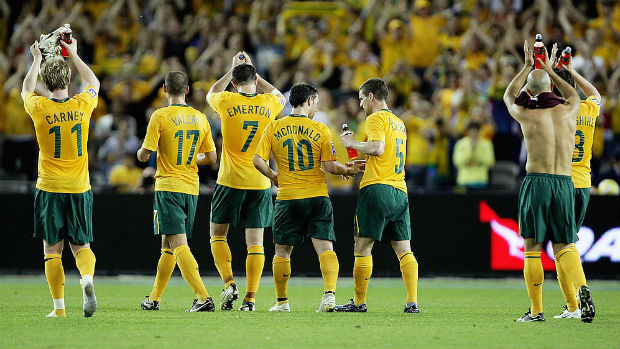 The final match of the third round against China in Sydney was effectively a dead rubber and Pim Verbeek took the opportunity to play a youthful Socceroos line-up including the likes of Ruben Zadkovich on debut.

The Socceroos had their fair share of chances but could not break down their opponent as China recorded a 1-0 victory in front of more than 70,000 at Stadium Australia.

The fourth round of qualification saw the Socceroos drawn against Uzbekistan, Qatar, Bahrain, Japan and Kuwait. The top two from the group booked their place at South Africa while the third place went through the play-offs.

Australia's first game in the next phase saw a gutsy victory over Uzbekistan in Tashkent. The Socceroos had to dig deep to snatch a win from their first visit to central Asia but recalled veteran Scott Chipperfield popped up with a header to secure the points.

The next match saw another World Cup qualifier against Qatar and another comfortable win, this time by a 4-0 scoreline in a repeat of Australia's dominant performances in Melbourne as Cahill, Kennedy and two goals from Emerton secured the points. 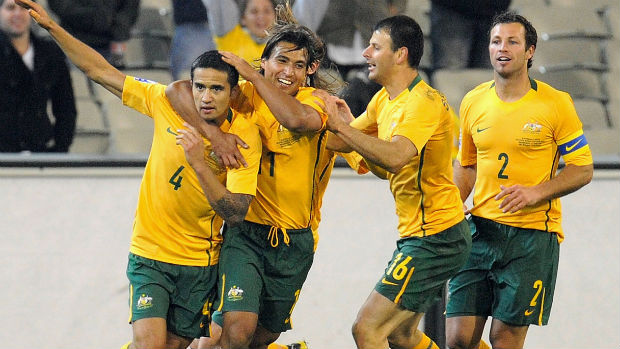 The Socceroos' next tie against Bahrain produced a smash-and-grab raid in Manama as Bresciano's stoppage-time goal dismissed one of the worst performances in recent memory.

Australia then went to Japan with maximum points from their three games while the Blue Samurai had two wins and a draw. The home ground advantage gave the Japanese the edge, but they failed to capitalise as the Socceroos ground out a 0-0 draw.

The Socceroos secured a 2-0 victory over Uzbekistan in their next match at Sydney's Olympic Stadium courtesy of goals from Kennedy and Kewell. The victory all but confirmed qualification as only a draw was needed from their next match.

And the Socceroos got the point they were after with a 0-0 draw against Qatar in their next match to confirm qualification to the 2010 FIFA World Cup in South Africa.

While the final two matches were dead rubbers, Australia beat Bahrain 2-0 in Sydney and rounded off qualifying with a come-from-behind 2-1 win against Japan in Melbourne.

After taking over in December 2007 and having led the Socceroos through World Cup Qualifying, Pim Verbeek took charge of the side for the FIFA World Cup 2010 in South Africa.

He entered his role with the Socceroos having led South Korea to the Asian Cup semifinals in the same year. He also assistant to former Socceroos coach Guus Hiddink with South Korea when they were World Cup semifinalists in 2002.

Verbeek had also coached at several Dutch clubs including Sparta Rotterdam, Feyenoord and Fortuna Sittard, and had a spell with Germany's Borussia Monchengladbach. 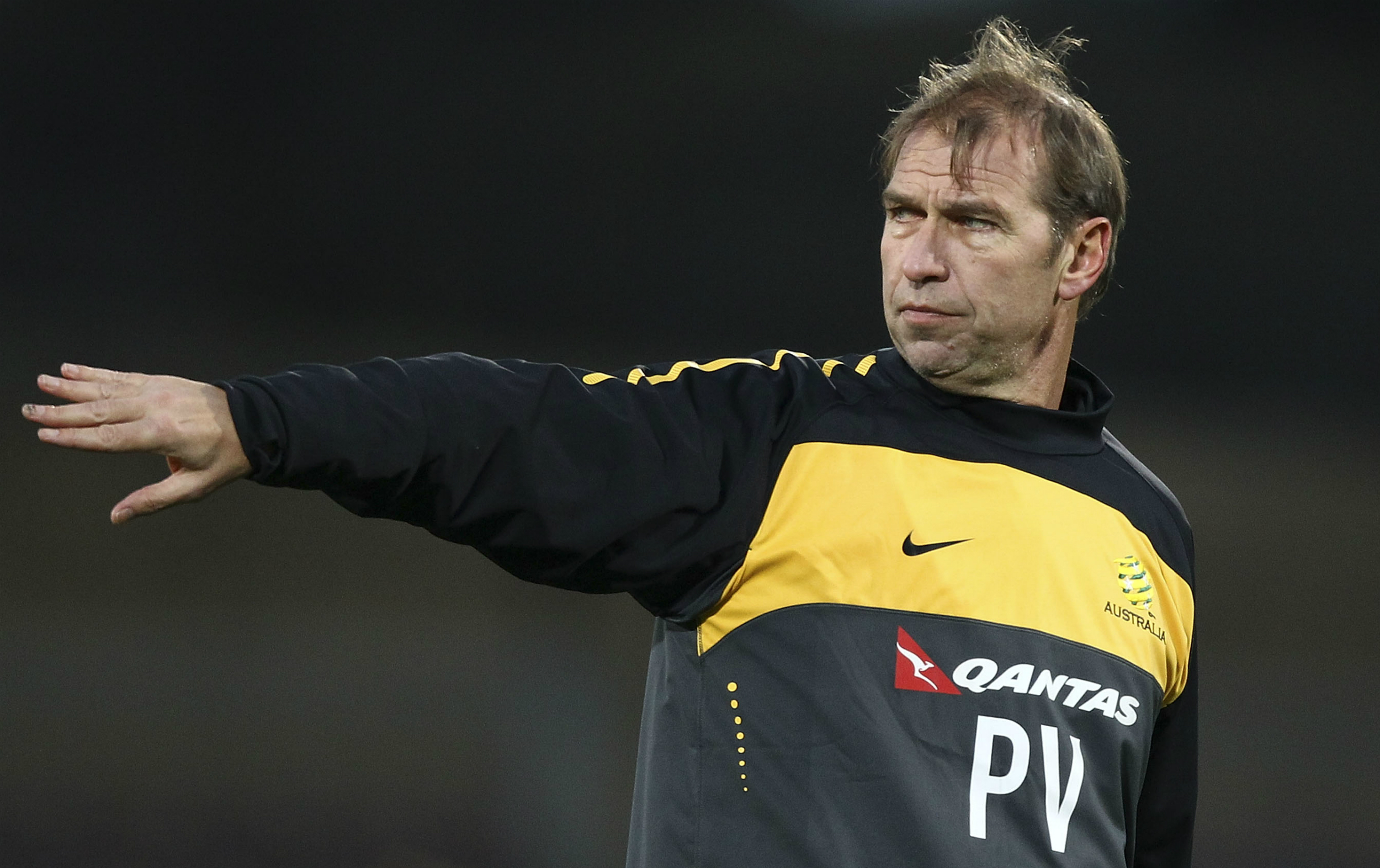 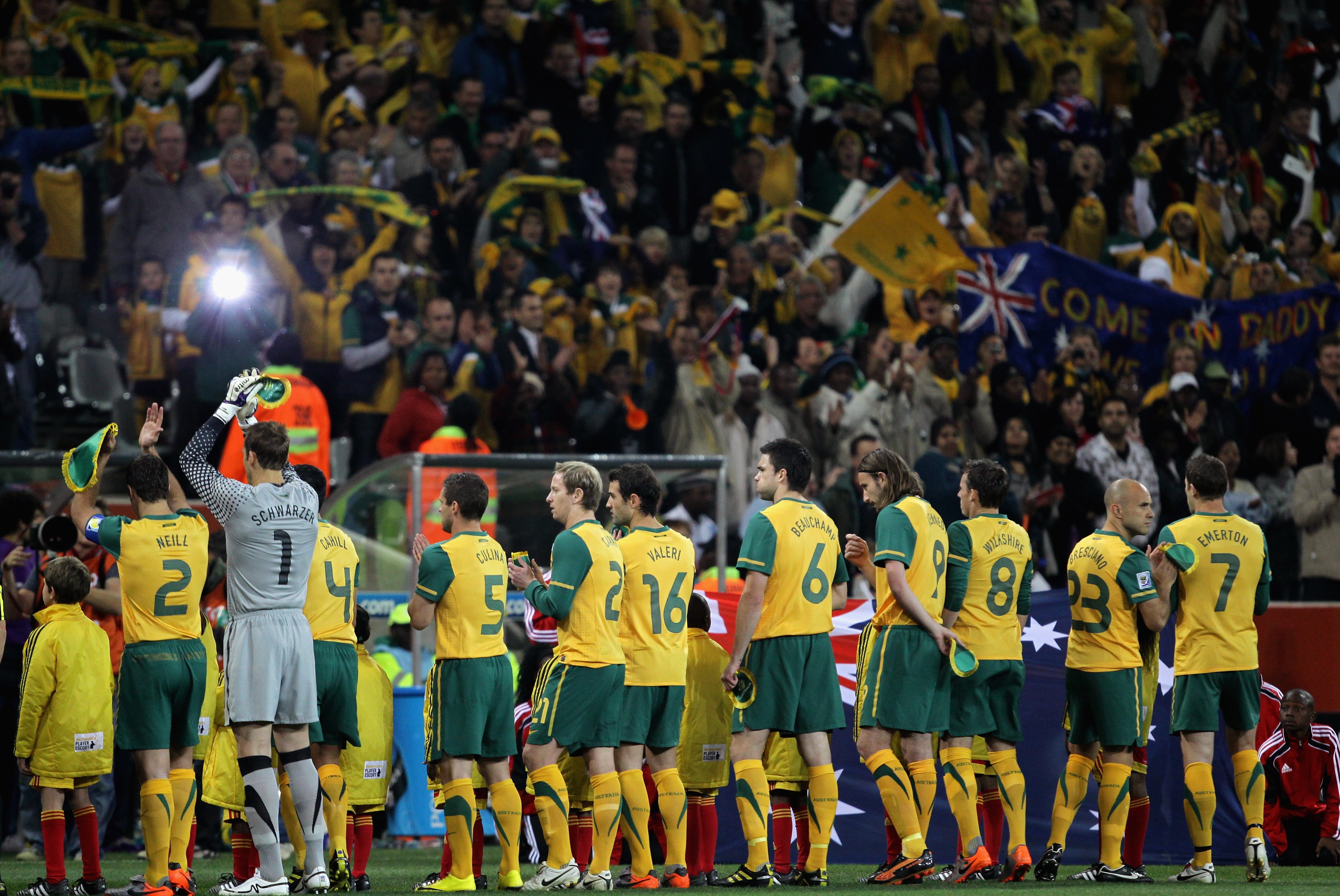 The Socceroos travelled throughout three cities in South Africa throughout its 2010 campaign.

Australia played its opening match against Germany in Durban, before heading to Rustenburg to take on Ghana and wrapping up against Serbia in Mbombela. Their base camp was a secluded wildlife and fishing lodge in rural Johannesburg. 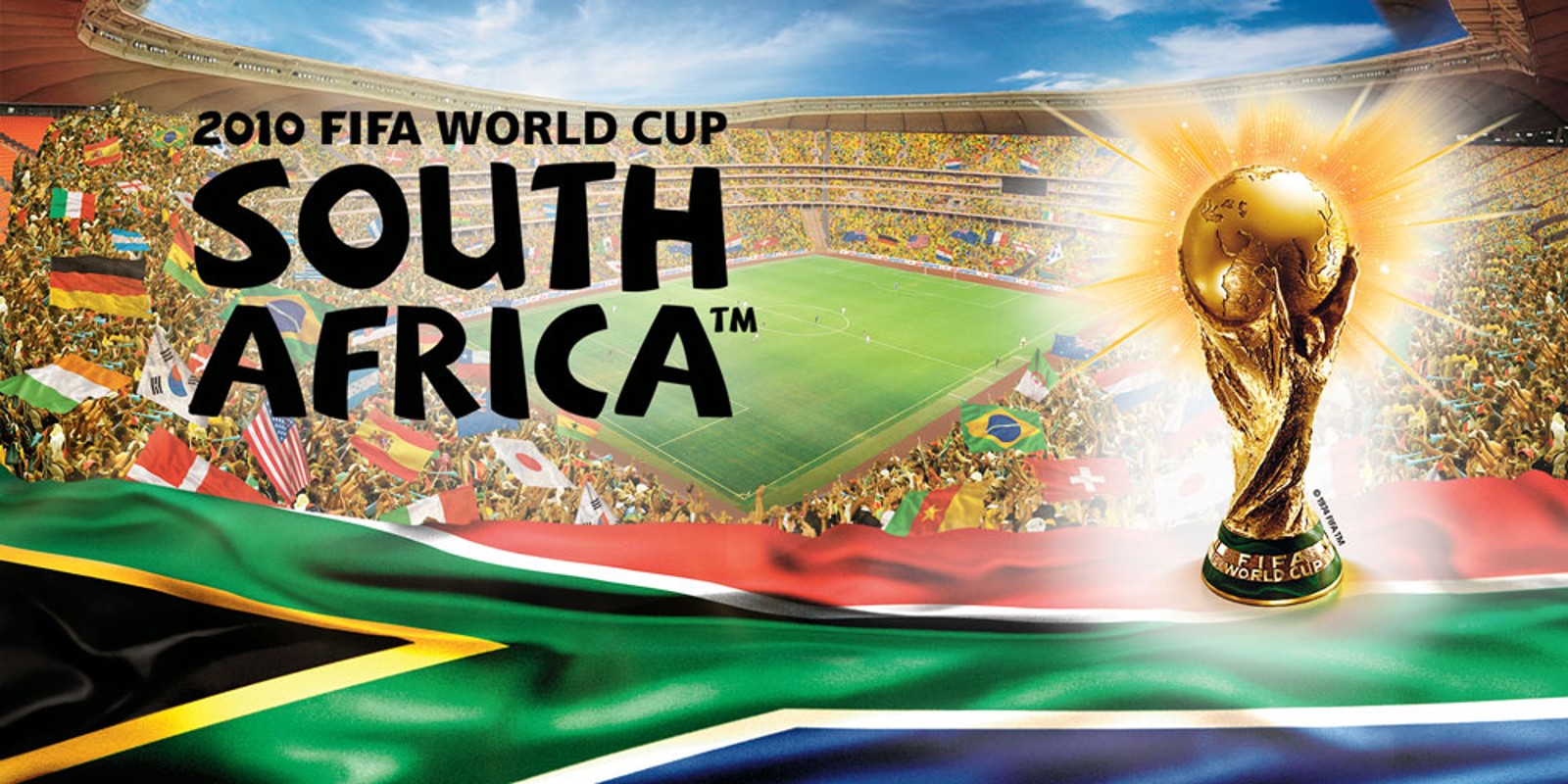 Australia were drawn in Group D of the FIFA World Cup 2010 alongside the might of Germany, Ghana and Serbia.

They faced Germany in their opening match of the tournament on Sunday 13th June in Durban, followed by matches against Ghana on Saturday 19th June and then Serbia on Wednesday 23rd June. 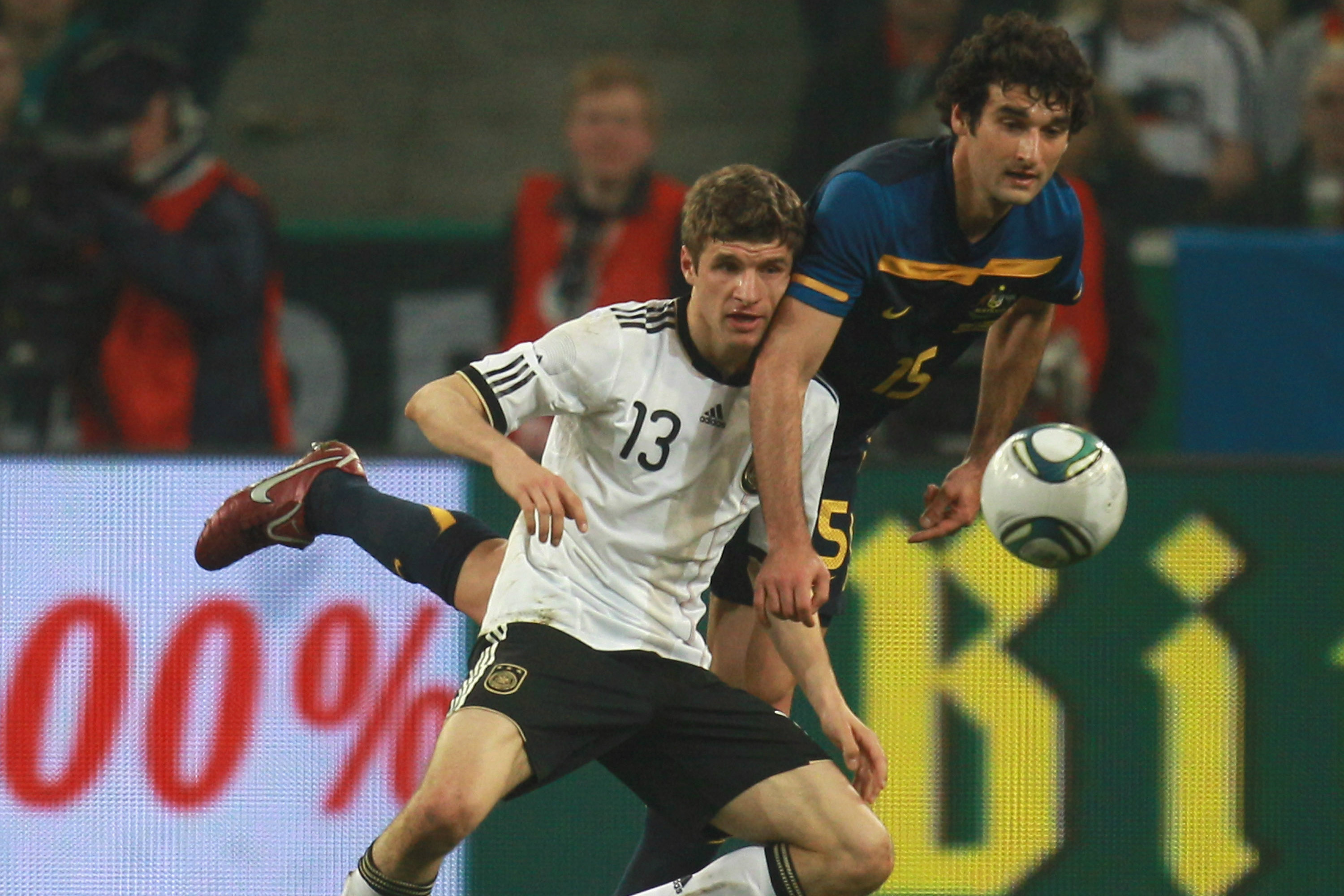 The opening game against Germany saw the Green and Gold promptly dispatched 4-0 by a brilliant Germany side.

The Socceroos were no match for the Germans on the day, with a young Mesut Ozil putting on a masterclass to send a signal of intent to the rest of the tournament.

Adding further to Australia's woes, Tim Cahill was sent off and missed the Ghana match because of an automatic one-match ban. 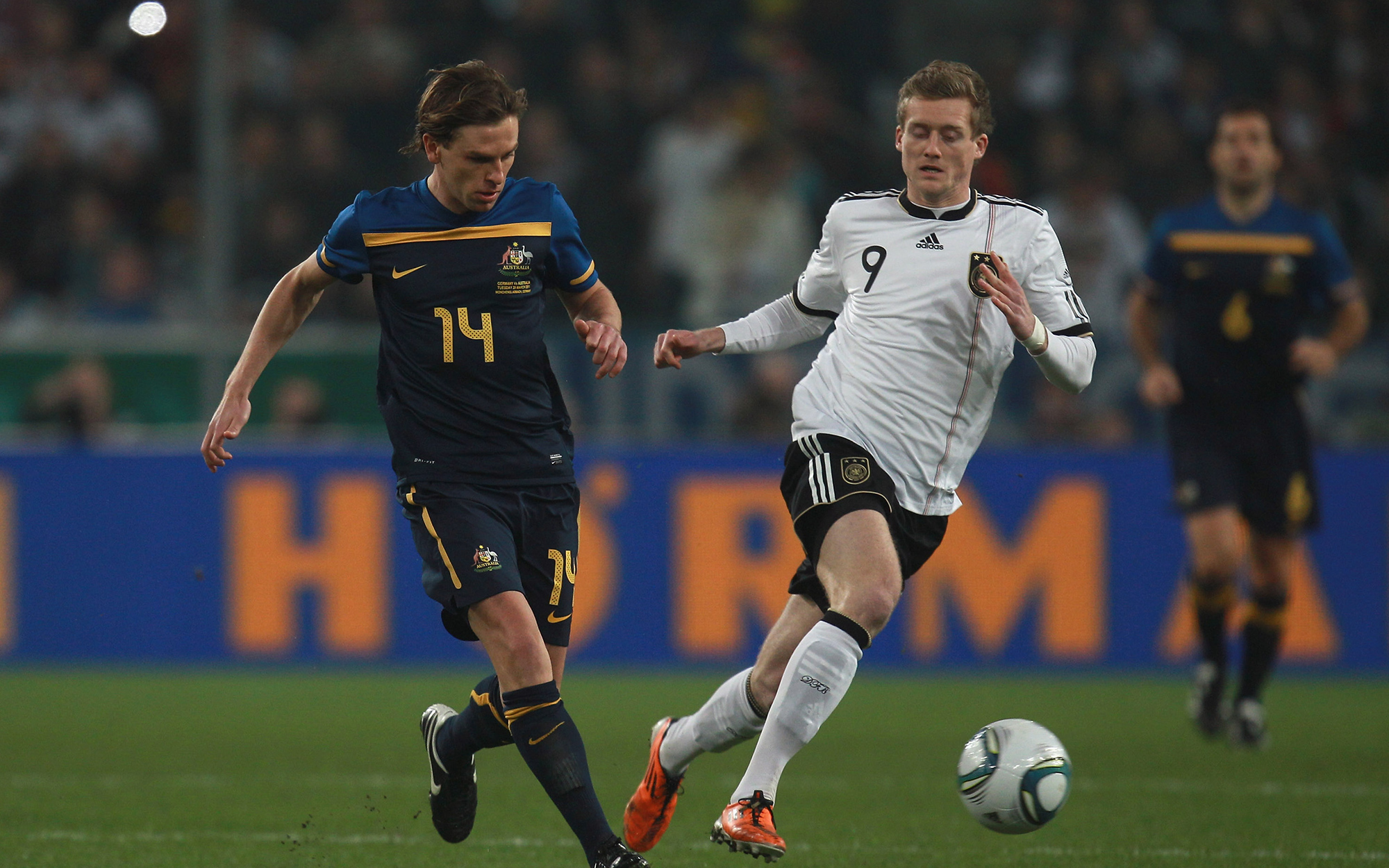 The second game against Ghana saw the side start in a much better fashion as Australia took the lead through Brett Holman in the 11th minute.

But just 13 minutes later, the Socceroos were once again down to ten men. This time, it was Harry Kewell who was dismissed for a deliberate handball by the referee Roberto Rosetti after keeping out Jonathan Mensah's shot on the goal line.

Despite Australia playing with 10 men for the majority of the match, the side held on the ground out a 1-1 draw and set up a blockbuster final clash with Serbia. 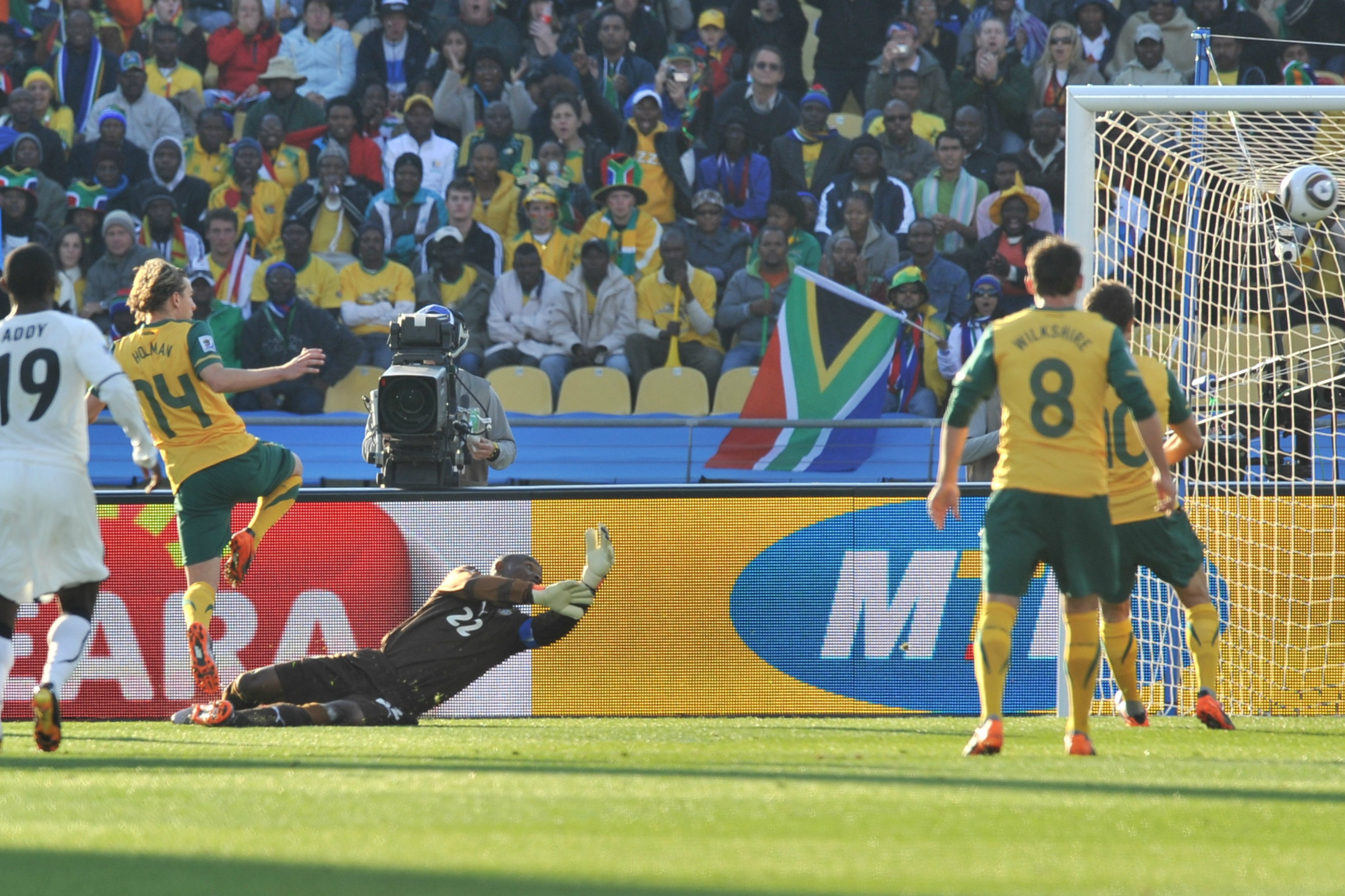 The Socceroos got Tim Cahill back for their final group game against Serbia but Kewell had to sit out.

Serbia had the better of play in the first half but failed to score through Nicola Zigic and Milos Krasic, but the Socceroos turned the tables in the second half with two quick strikes.

Cahill scored a headed goal against the run-of-play in the 69th minute, followed quickly by a Holman goal that saw the midfielder run twenty yards with the ball to eventually beat Vladimir Stojkovic from 25 yards.

Serbia then pulled a goal back through Marko Pantelic but Australia held on for a 2-1 win and a narrow third-place finish.

In the end, the only thing that stood between Australia and progressing past the ‘group of death’ was goal difference, a tremendous comeback from its opening matchday devastation. 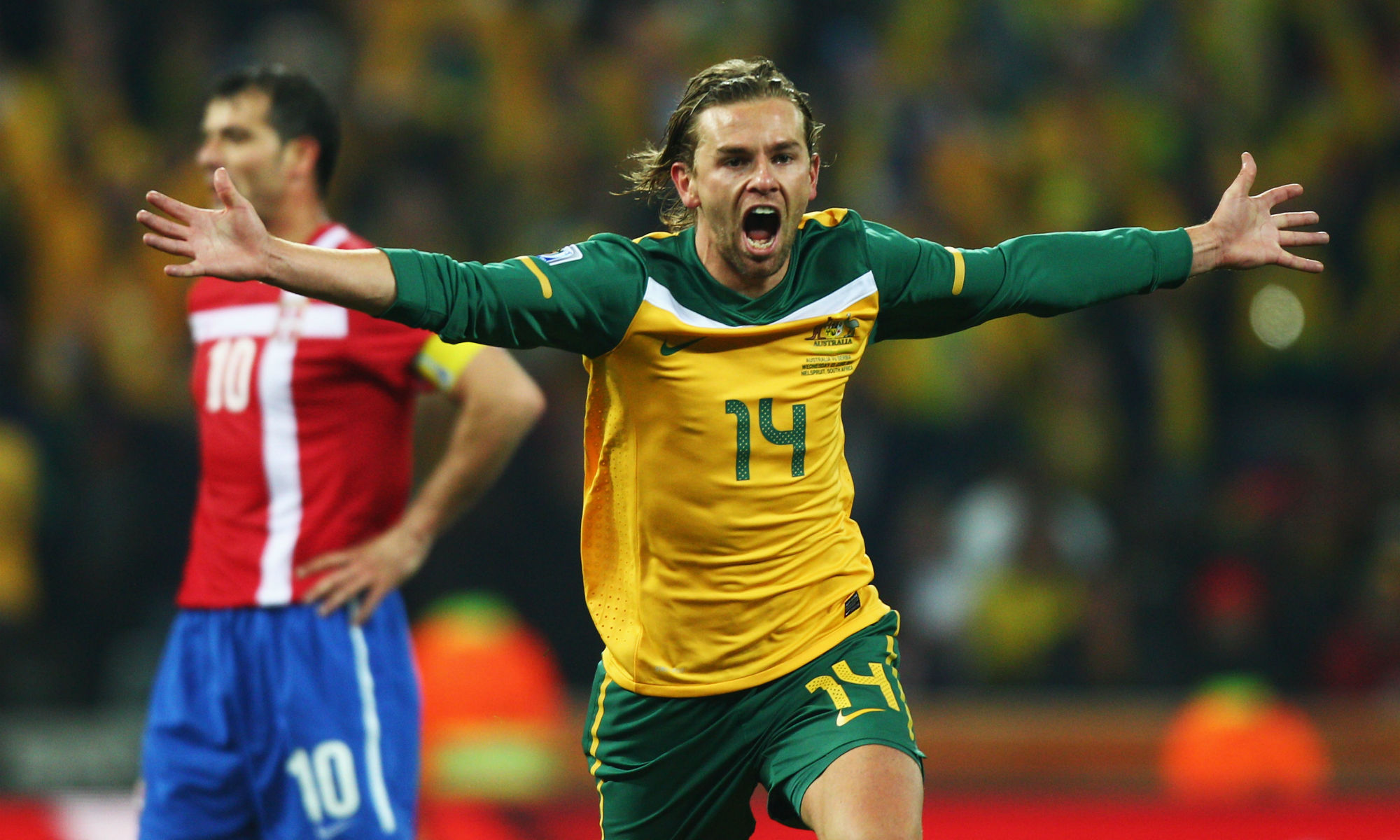