Head coach Rudi Garcia and captain Francesco Totti like what they've seen from Daniel De Silva after the young Australian linked up with Roma ahead of the International Champions Cup.

De Silva signed for the Serie A side in 2014 but remained in the A-League with Perth Glory last season.

Since then the 18-year-old has been called up to the Australian national team by Ange Postecoglou, although he is yet to make his debut for the Socceroos.

A first appearance for the Giallorossi could well arrive first.

De Silva has joined Roma's squad in Melbourne as they prepare for pre-season matches against Real Madrid and Manchester City. His new coach wouldn't say if the young forward has a chance of featuring for the first team in 2015-16, but - when quizzed by Goal - did offer a positive review of the Western Australian's potential at a press conference on Friday.

"We took the chance to bring him here to Australia with us," former Lille boss Garcia said.

"He's a very interesting prospect. He's a player for the future. He's young. He has to grow and to mature. It's important for him to train with the (first team) players. I've spoken to him. It will be a great chance for him. It means AS Roma has an eye not only the European market but also the whole of football."

Club captain Totti, 20 years De Silva's senior, will eventually have to make way and allow a younger man to inherit Roma's No.10 shirt.

It remains to be seen if the Australian is capable of one day inheriting his mantle, but the playmaking skipper has no doubts over the newcomer's raw ability.

"I agree that Daniel is a great prospect with big potential," he said.

"We've seen that over the two (training) sessions he's done with us. He's a skilful player with a good nose for goal. But of course he's still young. He still has time to progress." 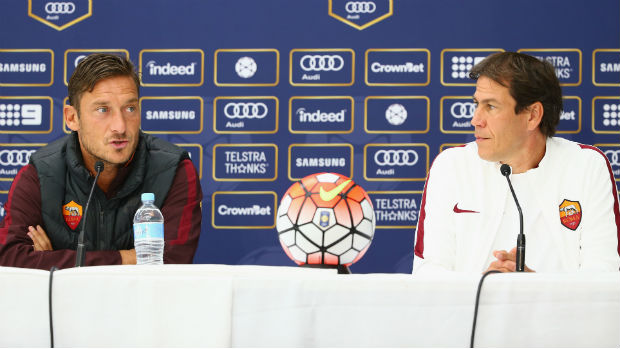 While De Silva is likely to be thrilled at being given the opportunity to train alongside some of Italy's best players, Totti and his senior team-mates are itching to be let loose in Australia's second biggest city.

"We actually we've only seen the training facilities so far," he said when asked for their impressions of the Victorian capital.

"We haven't had any free time. But I'm sure over the next few days the coach will give us some hours (off) and the chance to visit the city. It's a nice city, I enjoy it very much. I usually watch it on TV for the Formula One GP. I wish it were closer. It's very far away."