Tim Cahill: A look-back on a Caltex Socceroos career like no other

Tim Cahill is undoubtedly one of Australia’s biggest sporting heroes, a player who has captured the hearts of Socceroos’ fans and football fanatics around the world since bursting onto the international scene in 2004.

He captured English hearts during his time with clubs Millwall and Everton, while scoring some of Australia's most memorable goals in FIFA World Cup™ history.

Known for trademark headed goals and being one of the main men for Australia for more than a decade, we look back at what has been a glittering international career for Australia’s all-time leading goal scorer.

Cahill made his debut for the national team back in March 2004, in a 1-0 friendly win over South Africa in London.

He made his competitive debut shortly after in the 2004 Oceania Nations Cup, scoring six goals in the competition which pit Australia against Uruguay for a spot at the 2006 FIFA World Cup™.

Cahill was growing in stature at English Premier League club Everton when he was named in Guus Hiddink’s squad for the 2006 FIFA World Cup™ in Germany.

Cahill went on to play in Australia’s next three matches at the tournament, including 90 minutes in the historic Round of 16 defeat to Italy. This tournament was the start of Cahill’s journey to being recognised as one of the all-time Socceroos greats.

Cahill scored one goal in Australia’s first ever Asian Cup back in 2007 and slotted a penalty in a shootout which ultimately sent Australia packing in the quarter-finals. He scored crucial goals in qualifying for the 2010 FIFA World Cup™ and was picked in the squad for the South Africa tournament.

It wasn’t the brightest of tournaments for Cahill, who was sent off in Australia’s opening group stage match to Germany but redeemed himself with a goal in the final match against Serbia. This made him the all-time Australian leading goal scorer at the FIFA World Cup™, with three under his belt.

Cahill went on to feature heavily at the 2014 international tournament, scoring against world powerhouses Chile and the Netherlands. His goal against the Netherlands is widely regarded as one of the best FIFA World Cup™ goals of all-time.

ASIAN CUP VICTORY AND A TRIP TO RUSSIA

At their third attempt, Australia finally claimed victory in the Asian Cup with a 1-0 final win over South Korea in the final on home soil. Cahill scored three goals at the tournament, including two in the quarter-finals against China to help the Socceroos to victory.

Qualification for the 2018 FIFA World Cup™ was tough, but Cahill scored one of the most crucial goals of his career late into extra-time against Syria to send Australia all the way to Russia for their fourth ever FIFA World Cup™.

Opportunities were few and far in between for Cahill at the tournament, but he came on late in the final group stage match against Peru and nearly scored at a fourth FIFA World Cup™ - but in the end, it wasn’t to be.

Cahill is Australia’s oldest ever goalscorer, his winning goal against Syria in October 2017 at the age of 37 years and 308 days winning him that title. It’s an international career which spanned more than 14 years from his first match in March 2004 to his last in June 2018.

50 goals for the Socceroos will ensure Cahill’s name remains forever in the history books. It’s 21 goals better than the next highest scorer (Damian Mori), and the only current player who comes close is Mile Jedinak (20).

Cahill came heartbreakingly close to claiming the most international appearances for Australia. He has played for his country 107 – second only to former teammate Mark Schwarzer, who managed 109.

There’s no doubt Tim Cahill is an Australian sporting hero. He leaves an indelible mark on football in Australia and despite being 38-years-old he can still do a job for his country when called upon.

Thanks, Timmy. For everything. 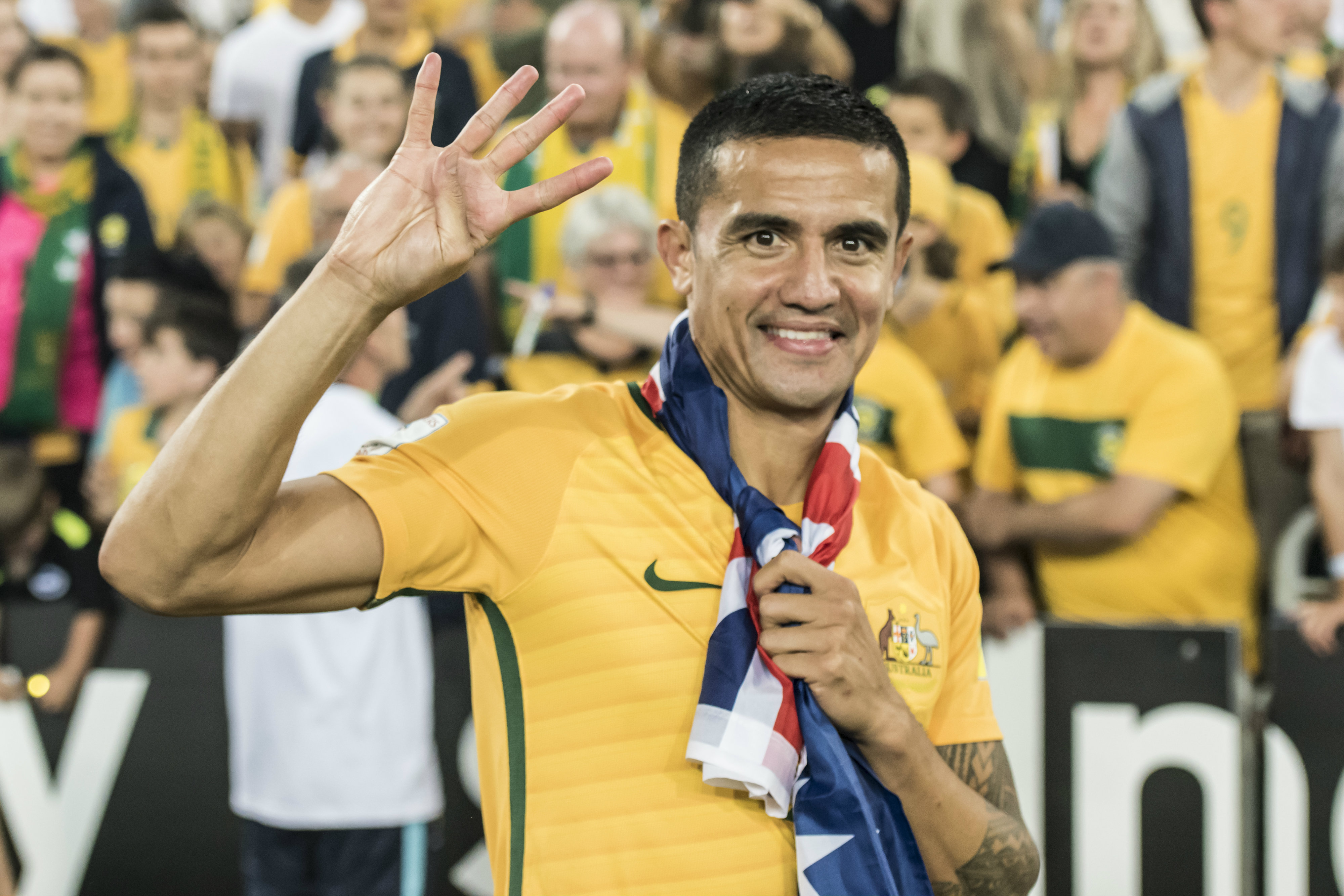