On November 17, the Caltex Socceroos return to the scene of their AFC Asian Cup 2015 Quarter Final success to meet the team they ultimately beat in Sydney's decider, Korea Republic.

This time around, Australia are back in Queensland to commence a new era under Graham Arnold.

It will mark the start of their 2015 title defence - but for now, let's look back at the last time the Caltex Socceroos played Korea Republic, and lifted the AFC Asian Cup trophy for the first time.

TICKETS: How to secure your seat at Suncorp Stadium

The road to the 2015 AFC Asian Cup Final

Korea Republic entered January 2015’s Final as two-time Asian Champions, having won the competition’s first two instalments. However, it was their first appearance in the Final for 26 years, and the enthusiasm surrounding Ulrich Stielike’s team was palpable.

They also approached the game in formidable nick. Korea Republic had not conceded a goal throughout the tournament, while ex-Swansea City midfielder Ki Sung-yueng and Tottenham Hotspur live-wire had been two of the competition’s standout players.

Australia’s started their road to the Final with emphatic 4-1 and 4-0 wins over Kuwait and Oman, but their 1-0 loss to Korea Republic in the group stage ensured there would be a slight unease in the build up to the big match – even if confident 2-0 wins over China and UAE in the knockout stage generated massive excitement around Ange Postecoglou’s team.

A frenetic 120 minutes in Sydney

The match started at a frantic pace as both sides searched for an opening goal. Son Heung-min was causing no shortage of problems for the Australian defence – volleying wide early in the first half and seeing a goal bound effort desperately blocked by Massimo Luongo.

Luongo had been the breakout star for Australia throughout the tournament, and the current Queens Park Rangers midfielder confirmed his status as the Caltex Socceroos’ new poster boy by firing his side ahead just before half time.

After collecting an incisive pass from Trent Sainsbury up the middle, Luongo took one touch and blasted a powerful dipping effort past Kim Jin-hyeon. 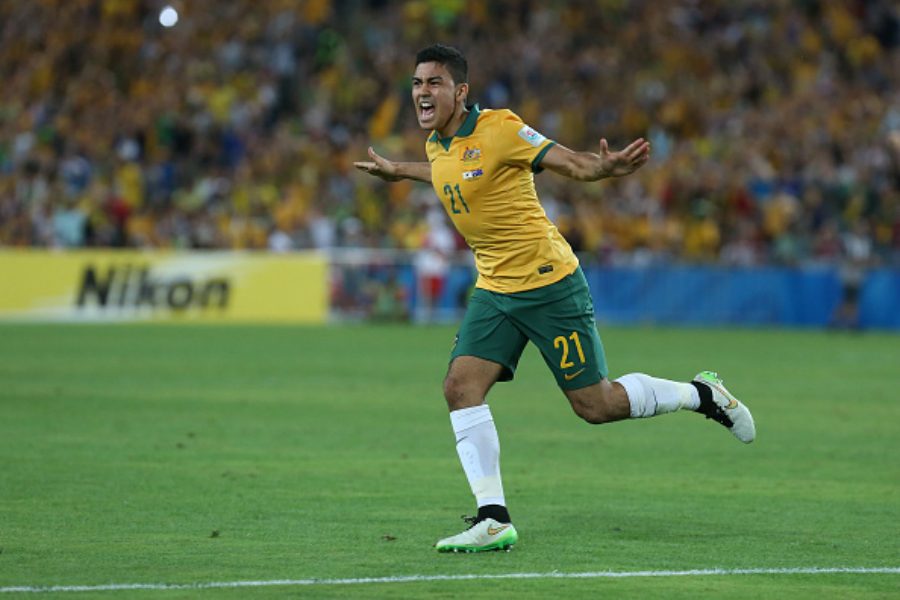 The second half saw Korea Republic rally, and the Australian defence remained steadfast to repel wave upon wave of pressure. Son Heung-min was once again the architect for his side, and the Tottenham man’s ability to drift across the pitch and dart in behind ensured the Caltex Socceroos had to stay vigilant.

However, with victory in sight for Ange Postecoglou’s men, Son Heung-min broke Australian hearts in injury time. The Korea Republic attacker latched on a clever ball from Ki Sung-yueng and fired past Mathew Ryan to force the game into extra time.

It was the ultimate test of character that Australia managed to lift themselves once more following the hammer blow of Son Heung-min’s strike. Tiring bodies across the field had the prospect of penalties looming ever closer, but two Australian substitutes would combine for a moment that is now etched firmly into Caltex Socceroos history.

Tomi Juric showed great strength to hold off and dribble past a clutch of defenders on the byline and after Kim Jin-hyeon parried the FC Luzern striker's shot back into danger zone,  James Troisi was on hand to slam the ball into the roof of the net and crown Australia champions of Asia for the first time.

The two nations will meet again on October 17 at Suncorp Stadium. Secure your tickets here.

The event is supported by the Queensland Government through Tourism and Events Queensland in partnership with Brisbane City Council through Brisbane Marketing.