The rise and rise of Socceroo Brattan

What a coup for Socceroo midfielder Luke Brattan to be signed by one of the powerhouses of English – and world – football in Manchester City.

It 's been quite a year for Brattan, who caught the eye of Liverpool in a July pre-season friendly, was called up to the Socceroos in August and now has inked a four-year deal with the two-time EPL champions, and was promptly loaned out to Championship club Bolton Wanderers.

At 25, Brattan is approaching the peak of his career. A holding midfielder, his game seemingly has it all.

Not only technically gifted and an accurate, astute passer, he’s also adept at breaking up attacks and isn’t shy to put his foot in.

Last season with Roar – while not hugely successful as a team in the Hyundai A-League – was among Brattan’s most consistent. His stats make for some impressive reading.

In 24 appearances during the 2014/15 campaign, Brattan finished second in the competition for passes (1597) at an impressive 83 percent accuracy rate. 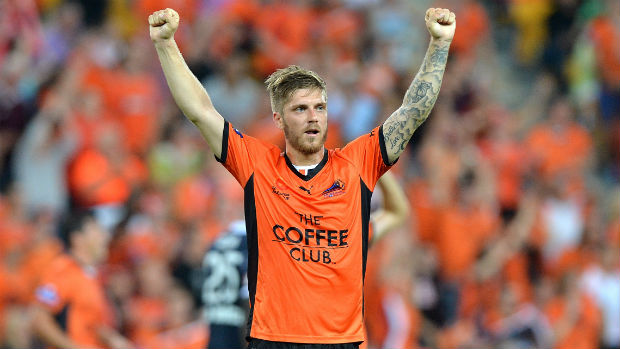 He made 68 tackles, 29 clearances and 67 interceptions in the middle of the park, while his set-piece delivery was another feature of his season.

Brattan also impressed Liverpool scouts during Roar’s pre-season friendly against the Reds earlier this year and is just a small snap-shot of why City signed him.

While his addition to the world-class City squad may have raised a few eyebrows, this is something Brattan has been building towards for some time.

"Bratts" made 91 appearances in five seasons in the first-team squad at Brisbane Roar, winning three Hyundai A-League championships in that time.

While he was born in Hull and move to Queensland at a young age, Brattan has been working his way to get a career back abroad ever since (his Dad Gary is also a former player in the old NSL, which no doubt helps).

Luke began his youth career at Rochedale Rovers, in the Brisbane suburb of Priestdale, before eventually being spotted and signed in the youth set-up at Roar.

Brattan made eight appearances for the Australian under-20 squad in 2008-09 but is yet to make his full international bow with the Socceroos.

But that could change soon having received his first-call up to Ange Postecoglou’s squad in August and has been in the set-up for the last three FIFA 2018 World Cup qualifiers.

And that was before he had his club future settled. Now he’s signed with a massive club and should be getting some consistent football in the Championship with Bolton, who are managed by former Celtic boss Neil Lennon.

It’s going to be some journey for Brattan over the next couple of years if he can become the next Aussie to feature prominently in the EPL.