Joeys striker Noah Botic has been revealed as the inaugural recipient of the Dylan Tombides Medal.

The 17-year-old Australian youth international was presented with the award in Brazil, as the Joeys prepared for this morning’s (AEDT) FIFA U-17 World Cup Round of 16 match against France.

The Medal, which was introduced through a joint PFA and FFA initiative in August, is awarded to a player selected from the Under 17 (Joeys), Under 20 (Young Socceroos) and Under 23 teams.

The Medal is presented to the player who exemplifies the standards, commitment and courage in representing Australia at youth international level, honouring the memory of Dylan Tombides.

The accolade reflects the progress of Botic who signed a two-year scholarship contract with German Bundesliga outfit TSG 1899 Hoffenheim in August, following trials at Manchester United and interest from Bayern Munich and Everton.

LIVE AND FREE: How to watch the Joeys v France at the FIFA U-17 World Cup™ 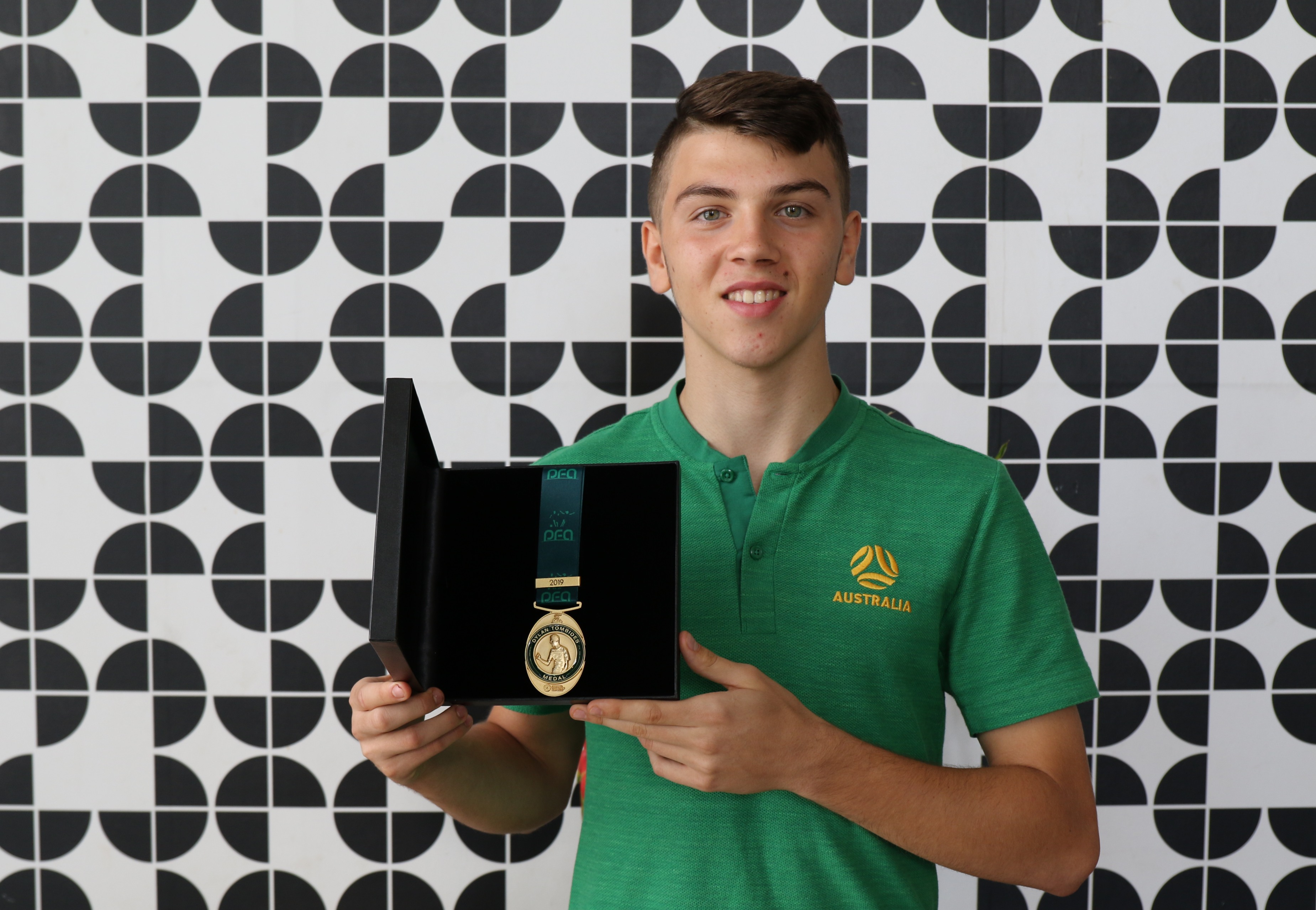 Botic has so far contributed to an outstanding campaign at the FIFA U-17 World Cup in Brazil, netting on four occasions during the tournament, including a brace in a 2-1 win over Nigeria that secured Australia’s passage to the Round of 16.

Commenting on the recognition with the Joeys, Botic said he was thrilled to receive the award.

“It feels amazing, I couldn’t be happier,” Botic said. “It tells me that I am working hard constantly on and off the pitch and confirms that I’m on the right track to become a professional footballer.

“To see that [Joeys Head Coach] Trevor Morgan and the PFA have picked me to win this award has made me feel excited about what is still to come in the future.

“After Trevor mentioned Dylan, it’s touched me a bit about his story and him playing for a young Australian side and him having that sort of difficulty in his life wasn’t easy, so he has inspired me.”

Botic said his work ethic and dedication were key to his recent rise to prominence and the award would inspire him to work harder to achieve his career goals.

In October, Dylan Tombides’s father, Jim, travelled to Australia from England to speak to the Socceroos during the PFA Men’s Footballer of the Year presentation about the award and how it allows Dylan’s legacy to live on, after the Australian youth international tragically passed away at the age of 20 from testicular cancer in 2014.

Joeys Head Coach Trevor Morgan, who will today guide his team in the biggest match in their young careers, said: “We are very proud that a player from this Joeys team was selected as the first recipient of the Dylan Tombides Medal.”

“The players in this squad work hard on a culture of excellence - called A class US. We have a well-established Leadership Group, from which there are several players who set the highest standards when representing themselves, their family and our country. Noah (Botic) has always been an outstanding contributor and example to others as he shows respect, humility, professionalism and self-discipline.

“On top of this his match performances have been crucial to success. In the AFC U-16 Championships he was joint top scorer without playing the Final and here at the World Cup has scored four goals in the group stage.

“It’s nice for Noah being a striker to win this special Award, named after a young Aussie striker with tremendous potential who was taken from us way too early,” Morgan concluded.

The Joeys kick-off against France at 10.00am (AEDT) today, with the game available live on SBS and theworldgame.sbs.com.au.