The Caltex Socceroos have defeated Thailand 2-1 in their final Group B World Cup qualifier on Tuesday night, putting the pressure back on Saudi Arabia as automatic qualification to Russia 2018 reaches a thrilling climax.

Relive all the action in the official match centre

With six changes made to the starting XI against Japan last week, and captained by national team legend Tim Cahill, there was a sense of urgency from the start on a cool night in Melbourne.

But the Thais rode their luck and defended desperately, while pint-size attacker Chanathip Songkrasin was a constant threat to Mat Ryan’s goal.

But they could only hold out for so long as the desperate Aussies pressed for as many goals as they could.

Australia will now hope Japan can do them a favour by winning or drawing in Jeddah overnight against the Saudis. If the Saudis win they'll progress as one of the two automatic qualifiers.

• Australia hit the post three times as they peppered the Thai goal with raid after raid.

• The Thai game plan was to defend in numbers, stay compact but try to hit on the break with their fast and tricky forwards, in particular the classy “Thai Messi” Chanathip Songkrasin.

• Just before the break Tomi Juric missed a golden opportunity to open the scoring, smashing his shot just wide.

• It was 0-0 at the break but within minutes of the restart the Thais had a strong penalty shout waved away after a challenge by Trent Sainsbury.

• But three late goals ensured there was plenty of drama with the Aussies scoring twice in the final 20 minutes to cancel out plucky Thailand's effort. 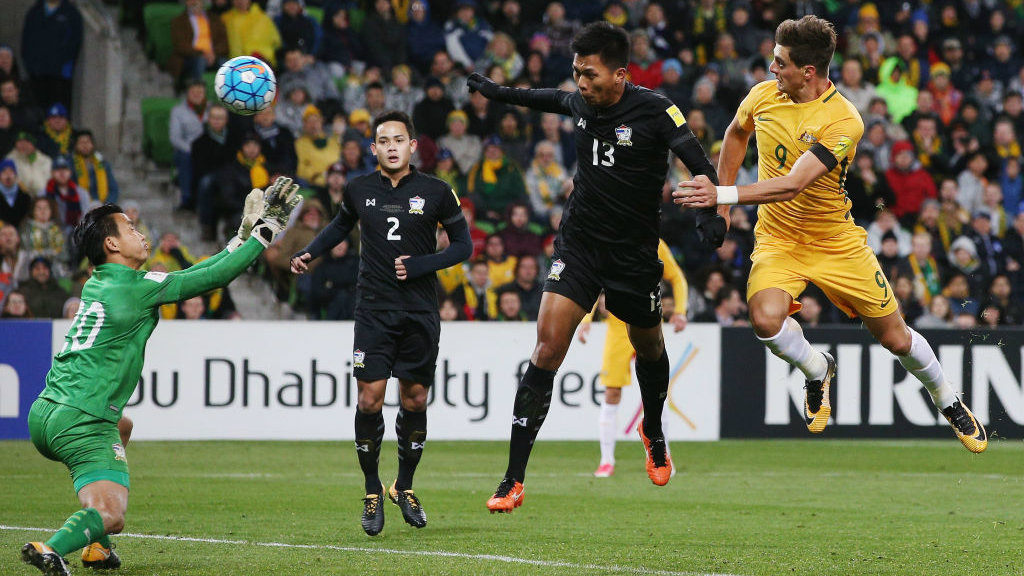 Australia were opened up down their right, and Notechaiya’s cutback from A-Nan who buried his first time shot.

After a corner wasn’t deal with, Leckie was first to a loose ball in the box to bury it home.