Australia has gone down 4-1 to a clinical German side in their opening game of the FIFA U-17 World Cup this morning in Chile.

The Australians looked confident in the opening minutes, pressing the Germans and forcing their foes to look to go direct.

But it took just 13 minutes for the Germans to unlock the Australian defence.

A quick counter caught the Australians on the break, falling to captain Felix Passlack who cut inside from the right wing, and finished clinically across the face of goal.

The Joeys had a brilliant opportunity to equalise at the 24th minute after some brilliant team pressing gave captain Joe Caletti a chance to win the ball in the final third.

He did just that, and found Pierce Waring with a brilliant through ball.

But Waring couldn’t convert his opportunity as goalkeeper Constantin Frommann brilliantly closed him down.

It took just seconds for the Germans to counter yet again, with Werder Bremen striker Johannes Eggestein picking up the ball at the top of the 18-yard-box, before getting a shot away that was brilliantly saved by Joeys keeper Duro Dragicevic.

But Eggestein was quick on the rebound, getting his head to the shot and nodding it in to double the German lead.

The Germans tripled their lead with minutes to go in the first half after some brilliant passing play unlocked the Australian defence, with Eggestein slamming his shot into the top corner to earn his brace. 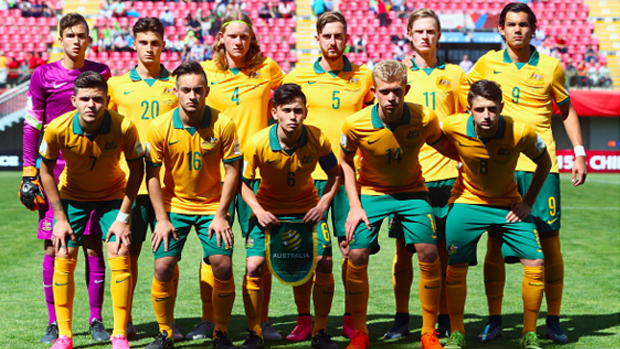 Australia came out firing in the second half, again pressing their opposition and putting them under pressure.

The reward came ten minutes after the break when a brilliant ball over the top of the German defence from Perry Fotakopoulos found Waring, who made up for his earlier miss with a brilliant chipped finish over the advancing Frommann.

Chances were coming thick and fast for the Australians as Fotakopoulos almost caught Frommann unawares with a cheeky attempt from distance, but it wasn’t to be with the German keeper punching the effort over the bar.

It didn’t take long for the Germans to quash the Australian uprising, as some individual brilliance on the ball from Salih Ozcan opened up Australia’s defence.

A clever square ball found Vitaly Janelt, who powered a shot from 25 yards into the top corner of the net.

The Joeys had a flurry of late chances – including two late free kicks from Liverpool’s Jake Brimmer that fizzed wide - but a second goal wasn’t to be.

The Australians now take on Mexico on Wednesday afternoon [Thursday morning AEDT] in their second group game of the 2015 FIFA U-17 World Cup.