From growing up in a refugee camp to being relegated twice and coming to terms with the passing of his sister, Socceroos attacker Awer Mabil has had to endure hard times to achieve his dreams.

The 25-year-old recently realised a massive goal of qualifying to play UEFA Champions League group stage football, which will be also be a first for FC Midtjylland.

It comes just months after Mabil capped off an outstanding 2019/20 season in Denmark by lifting his side’s third league title in six years and scoring a career-best eight goals.

However, his journey through football and life has been far from easy and he highlighted that after winning his first Danish Superliga title.

“It's (the feeling) hard to describe. It's emotionally charged, but it's good emotion,” Mabil said.

“It's always nice to score and it makes it even better to win a championship. I'm really grateful for the amazing team we have.

Watch Mabil tell his entire story in the video at the top!

“Nothing would happen without this team, these coaches and these fans, so we all deserve this moment."

He added: “It was my (late) sister's birthday a couple of days ago. It's also for her. It means everything. I have been relegated two times and now I am a champion."

His sister Bor, 19, was killed in an Adelaide car crash in January 2019 - just hours before Mabil and the Socceroos were due to take to the field in the quarter final of the AFC Asian Cup against UAE.

"The Asian Cup was a mixed memory for me because I was on top of the world representing my country, scoring goals for my country and then all of a sudden, I get the news that I had lost my sister," Mabil told Socceroos.com.au.

"It was tough for me because it was the start of my dream and then to get the news that I had lost someone who had been my best friend and supported me for a long time just brought my world down."

Despite Mabil’s sorrow, he believes it has offered him a new form of clarity.

He also admitted that he has been able to find happiness in knowing that his sister was proud of what he had achieved.

"Now I'm strong. I'm unbreakable because I've been broken and I pulled myself together.

"The world can come at me with whatever it wants because there's nothing that could be worse than what I've been through.

"I try to push every day for her and for everybody that wants to look up to me as an example, so I feel that responsibility and now I need to work."

It is that kind of attitude that has seen Mabil praised throughout the footballing world.

Not many 25-year-olds in his shoes would be able to uphold such a positive outlook.

Although it should come as no surprise because resilience was instilled in him from an early age.

Mabil grew up in a refugee camp in Kenya after his family was forced to flee the civil war in Sudan.

In a place where hunger and cramped conditions became everyday life, his one saving grace was football.

"Football meant a lot to me and the other kids in the refugee camp," he explained.

"We left our country to go into the refugee camp because of the trauma, so you have to find a reason to be happy and a way to spend your time.

"If you don't do that, you'll be thinking a lot about your situation, and that can affect you a lot."

After moving to Adelaide as a 10-year-old through a humanitarian program, he quickly found out that the Western world would take some getting used to.

He struggled to adapt to not being able to run freely and learnt that not everyone was willing to play football too.

"That was different for me and it wasn't until the age of 13 that I joined a football club.

"The first few years were difficult because I had to learn how to play in a position.

"I was just going wherever the ball was because that's what I wanted. I just wanted the ball.

"The coaches tried to teach me as much as possible, but I wasn't listening that much."

Despite Mabil’s lack of tactical and positional knowledge, his talent was evident for all to see.

Within months he was invited for a trial with the South Australian Sports Institute (SASI) where he spent the following two years.

It was former Socceroo Tony Vidmar who identified Mabil’s talent and converted him from a free-roaming striker to a winger.

After an impressive two years with SASI, he was invited to train with the Adelaide United youth team, and the rest is history.

"After playing with the youth team, I was invited to train with the professional team and from there I just developed because I was training with a professional club," he said.

It was at that moment that Mabil began to realise his dream of becoming a professional footballer could turn into reality. 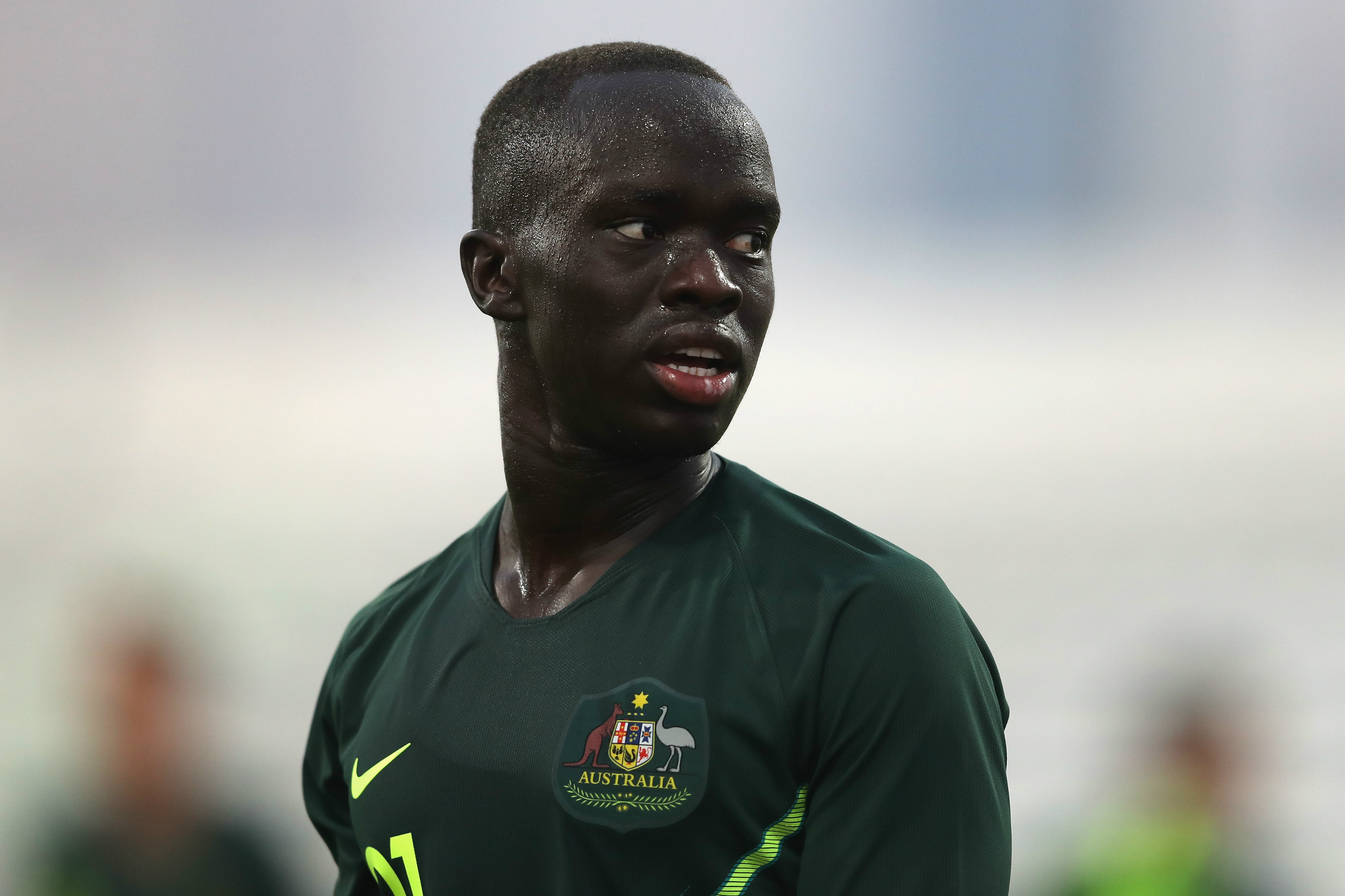 He put his head down and tried to learn as much as possible in the Reds environment.

At the age of 17, he became one of Adelaide’s youngest ever debutants and he recalls the emotion of being told that his dream was about to come true.

"I remember it was after one training session that the coach said the starting 11, then he said the bench and I started walking inside because I was the last player to be called.

"I thought that it could not be true and then some players came around me and said it was true.

"I just stopped in that moment and just visualised my family coming to watch me.

"Even if I didn’t come on, I wanted to do the best warm up so my mum could see me in front of thousands of people."

But he did not have to worry about not featuring because he ended up coming off the bench to make his debut in the 1-0 win over Perth Glory at Coopers Stadium.

He explained warming up in the 60th minute to then being called to the bench by Josep Gombau and learning that he was going to come on.

"The moment they said my name over the speaker, I was like ‘wow’, Mabil stated.

"That's why I will always love Adelaide United because they gave me that chance.

"And to do something like that in front of your home city. The fans were behind me because I'm a local guy from there. It was amazing."

It took Mabil 18 games to score his first A-League goal which he admitted was a "big relief" because it took the pressure off and allowed him to develop.

And he did just that.

After two successful years with the Reds, including an FFA Cup win, Mabil secured a dream European move.

However, the start of his new adventure was far from easy.

When he arrived at Midtjylland, he was loaned out to fellow Danish Superliga outfit Esbjerg fB to allow him to get more game time and on his debut, he was sent off before eventually being relegated with the side.

On his return to Midtjylland, Mabil was loaned out again.

This time to Portugal in the Primeira Liga with Paços de Ferreira where he scored three times in 26 league appearances before being relegated again.

It was these experiences that strengthened his determination to succeed.

"I still kept the faith," he recalled.

”I knew that I was going to do something one day and I just needed someone to believe in me.

"I was going to continue working until that person showed the interest or belief."

Luckily for Mabil, Midtjylland recognised his talent and were willing to stick by him.

Since returning from loan, he has gone on to become one of their most important players.

In their recent title-winning season, the 25-year-old complimented his eight league goals with seven assists.

He was also instrumental in helping Midtyjlland qualify for their first UEFA Champions League group stage phase, with his assist in the final playoff match sparking his side’s four-goal burst against Slavia Praha.

Mabil has also established himself as a Socceroo after scoring on debut in 2018 against Kuwait while playing alongside childhood friend, Thomas Deng, who was also on debut.

As for his future, he aspires to play in one of Europe's top leagues and win a FIFA World Cup game with the Socceroos.

He also hopes that his newfound glory can inspire future generations, but Mabil admitted that anyone wanting to follow in his footsteps needs to embrace the challenges.

"I think we're so caught up in the illusion that everything will go well but sometimes I think the most important thing someone can learn is to love obstacles.

"The moment you start to love obstacles and control the way you go through those obstacles is what's going to make you the person you are.

"Those obstacles are what makes the journey interesting."