‘I thought my career was over’: Trent Sainsbury fights back tears reflecting on 50th cap

The Australian football family and broader sporting community were captured by Trent Sainsbury's emotional reaction to making his 50th international appearance, as the Socceroos defender struggled to fight back tears while reflecting on the trials and tribulations of his national team journey so far.

The 29-year-old brought up his half century during the Socceroos' historic eighth-straight victory as they cruised into the third stage of FIFA World Cup 2022 qualifying with a 1-0 win over Jordan.

Check out some of the best reactions on social media to Sainsbury's powerful interview below.

For the Socceroos defender, the lead up to his half-century has been far from straightforward.

In 2014, the centre-back broke his knee cap after tripping on a sprinkler on his debut with PEC Zwolle in the Netherlands.

The injury forced him out of the game for six months, ruined his chances of making a Socceroos debut at the 2014 FIFA World Cup in Brazil and left him wondering if he would ever play again.

After returning from the knee break, Sainsbury was again robbed of a national team debut after he sprained his ankle in the opening match of the 2014/15 Eredivisie season.

Seven years on and with 50 Socceroos appearances under his belt, the Perth-born prodigy choked back tears as he reflected on overcoming these incredible hurdles.

“It’s a big milestone but I’m just happy for the boys and I’m happy to be part of the camp still,” an emotional Sainsbury said.

“I always go back to my first cap against Belgium, I think about how lucky I was to get one. To get 50, it’s a pretty big thing but I just love being part of this team, this family, with the boys.

Just when I thought I was a good shout to go to the 2014 World Cup. I busted my knee open, I broke my kneecap, and I thought my career was finished.

“To get to 50, it means a lot and I’m grateful to be amongst it with the boys. Eight wins from eight, I can’t think of anything better.

“Let’s go on and get more so we can get bigger and better.”

Since Sainsbury’s Socceroos debut in September 2014 against heavyweights Belgium in an international friendly, his international career has gone from strength to strength.

Starting every game in the 2015 Asian Cup, he was an integral part of a Socceroos side that went on to win the tournament on home soil - even scoring in the semi-finals and earning man of the match honours in the final.

And with a club career that has taken him to six different countries, including moves to Inter Milan and PSV Eindhoven, Sainsbury is  showing no signs of slowing down any time soon.

In a spectacular showing of his versatility, he drifted between centre-back and a defensive midfield role in his 50th appearance.

With tougher matches to come in the third round of qualifying, it is this adaptability that Sainsbury believes can only aid their quest on the road to Qatar 2022.

“Teams will be surprised at how we set up. They are not going to be able to pick us as a one formation team,” he explained.

“We will play at our speed, our tempo and get the win wherever we go, against whoever we play.”

In the wake of Sainsbury's interview, the Australian football community responded with a flood of tributes on social media. 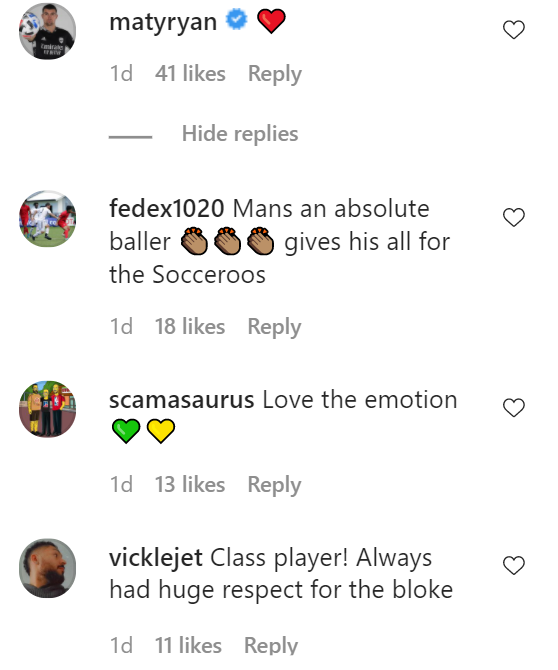