Game on! CUPRA: Official automotive partner of the Socceroos

CUPRA, Australia’s newest car and lifestyle brand, is teaming up with Football Australia to support the professional development of men’s and women’s football in Australia. Announced today following the Commonwealth Bank Matildas’ friendly against New Zealand last night, CUPRA becomes the official automotive partner of the men’s Socceroos and women’s Commonwealth Bank Matildas national teams in one of the most exciting periods in the sport’s Australian history.

As part of the partnership, CUPRA will feature on the Socceroos’ training apparel and the parties will collaborate on content campaigns and fan experiences. No stranger to igniting the passion of football fans everywhere, CUPRA is also the global official partner and official automotive partner of FC Barcelona in Spain.

The CUPRA brand, proudly hailing from Barcelona, is known for its emotional design and spirited performance, and is no better encapsulated than by the brand’s evocative cross-over SUV, the CUPRA Formentor.

To celebrate the announcement, CUPRA and Football Australia collaborated to create an action-packed digital spot featuring some of Australia’s hottest up-and-coming football talent and National Team players. The film, which depicts a neon-lit rooftop game of street football being joined by Australia’s best players, also unveils the CUPRA Formentor – its first appearance in Australia prior to launch. 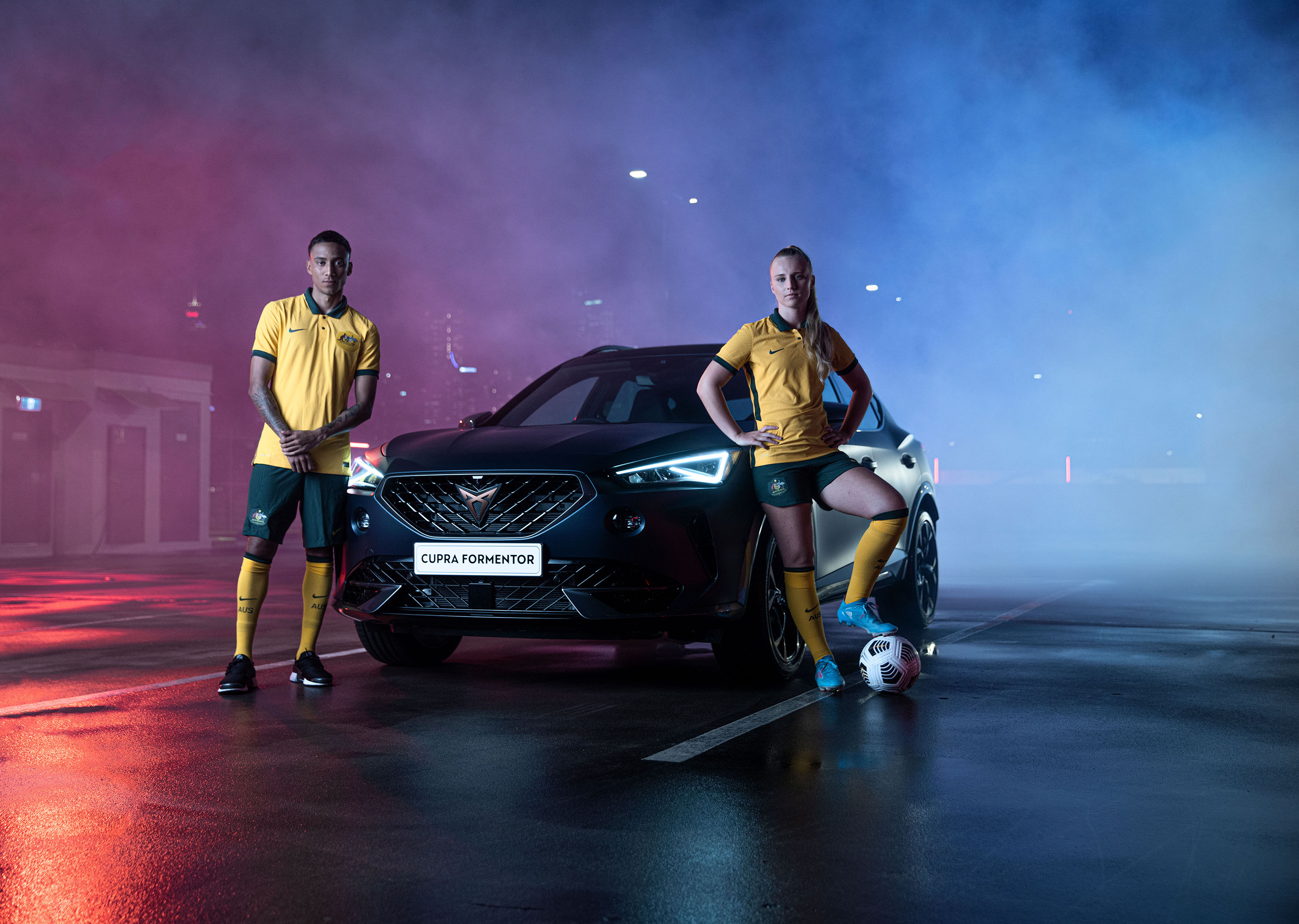 CUPRA Australia Director Ben Wilks said, “Football is the world game and a sport that invokes enormous passion in fans everywhere. To be partnering with our national women’s and men’s team throughout not one, but three global tournaments is a source of immense pride for the entire CUPRA Tribe, and we can’t wait to get behind the teams in their quest for glory, and share our passion with the teams’ fan base of over seven million people.”

Football Australia CEO, James Johnson, was pleased to be partnering with CUPRA, a brand that already has strong ties to football.

“Football Australia is proud to have partnered with CUPRA, a new and exciting performance car brand that will bring great energy to the Australian market. Over the past 18 months we have worked hard to align football with commercial partners that believe in our sport, and recognise our game’s unique ability to unite and excite Australians. CUPRA has impressed us with its bold vision for the future, and we’re delighted that CUPRA has chosen football, and specifically our engaging and iconic national teams, as their first partner in the Australian market,” Mr Johnson said.

CUPRA arrives in Australia in 2022

This partnership with Football Australia marks the very first collaboration for CUPRA in Australia, which will officially commence trading mid-this year with the opening of the brand’s inner city CUPRA Garage spaces in Australian capital cities. Staffed by passionate CUPRA Masters, the Garage spaces will serve as a central beacon for the brand, while also becoming a local hub for the growing CUPRA Tribe – an international collective of fans and like-minded people, bound by a shared love of driving.

Unlike other car brands, CUPRA will offer its customers a unique and bespoke brand experience and, in conjunction with its CUPRA Garages, will lean into digital commerce, embracing a hybrid agency sales model. Always progressive, CUPRA also offers fans and customers the chance to come together and experience the brand online, recently unveiling its own digital world within the Metaverse.

As part of its partnership with Football Australia, the brand will also be delivering a range of exciting experiences and once-in-a-lifetime opportunities for the fans and players at all levels of the game.

Launching in Australia with a range of performance vehicles powered by petrol and plug-in-hybrid engine technology, CUPRA has also recently confirmed its highly emotional vehicle line-up, which will launch with the CUPRA Leon hatch, the CUPRA Ateca SUV and the CUPRA Formentor cross-over.

More details on the Australian launch of the CUPRA brand and its distinct line-up will be available in the lead-up to the brand’s mid-2022 launch.