A die-hard Socceroos fan recalls the tale of how he organised a last-minute trip to Brazil for the FIFA World Cup - only to accidentally give his ticket away right before entering the stadium for Australia v Chile!

Whilst going to see your country participate at a FIFA World Cup in Brazil is every football fan’s dream, my decision to travel to Brazil was pretty much a last-minute thing.

Approximately six weeks before the tournament was due to kick off, I thought I would check whether there were any frequent flyer seats available. Months earlier when I checked there were none.

Immediately I called my mate, and said, 'Dez (not real name, to protect my mate’s identity) I can get 2 frequent flyer seats to Santiago Chile. Are you in?' It took him 30 seconds and he said, 'yes!'

Ten minutes later and the return tickets Sydney to Santiago were booked. Next was the tickets, which we managed to buy online.

And so, four weeks later, Dez and I were flying to Santiago Chile. At the airport in Santiago wearing our green and gold we were jeered by Chilean fans also on their way to Brazil, but it was all in good spirit, and we took a picture with them as they were holding a replica of the FIFA World Cup.

Our flights took us through to Sao Paolo where we arrived on the opening day of the FIFA World Cup, and the next day we were booked on a 9:00 am flight from Sao Paolo to Cuiaba for our opening game with Chile.

We were staying at a hotel close to the airport, which was of course full of fans from all parts of the world and heading off to different destinations in Brazil to see their teams.

After a sleepless night due to the excitement of what was ahead of us, we got on the bus to the airport at 7:00 am wearing our gold 2006 Socceroos jerseys.

It was a 20 minute bus ride to the airport and just after we pulled away from the hotel a guy wearing an England shirt approached us.

He was going to the airport to take a flight north to see England’s game - completely the opposite direction as Australia was playing Chile in the south.

However, he had scored four tickets to the Australia v Chile game in the ballot which he was still holding.

He asked me if I wanted to buy them. I said 'thanks mate, but I haven’t flown all the way to Brazil from Australia without tickets to the game.'

We got off the bus and our luggage was being unloaded.

I went up to him and said, 'listen, once you head north you won’t be able to do anything with your tickets to the Aust v Chile game.  If you give me the tickets I’ll try to off-load them, and if you give me your email address I’ll find a way to get the money to you.'

My intentions were completely honourable. I had no need for the tickets, and I just wanted to give the Pom a chance to get some money for his tickets and let two more fans (hopefully Aussies) see the game.

When we arrived at the airport in Cuiaba you could feel the tension.

Cuiaba was way down south on the edge of the jungle. The temperature was around 30 degrees centigrade and the air was humid. For anybody who has not been to a game at a World Cup, the atmosphere is like no other. I have been to six games at World Cups in 2006, 2014 and 2018, and the atmosphere at all of them rivalled Australia’s famous game against Uruguay at the Olympic Stadium in 2005 to qualify for Germany.

The Chilean fans seemed to outnumber Aussies in Cuiaba by at least 2 to 1 - and they were cocky! 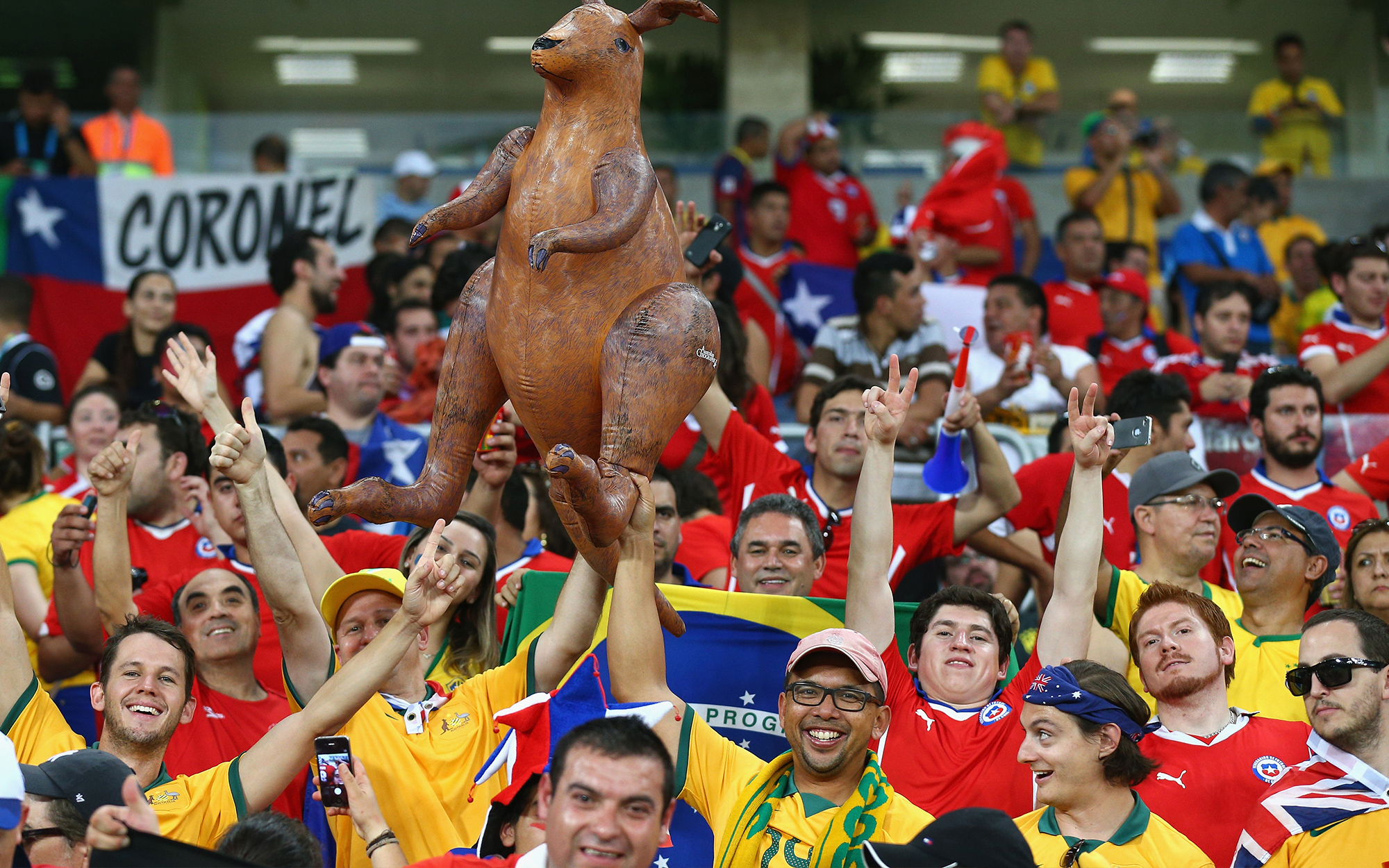 We arrived at the ground about 60 minutes before the scheduled 6:00 pm kick-off and there was a carnival like atmosphere outside.

We entered the long snaking queue for ticketholders to enter the stadium, and there were Brazilians offering to buy any spare tickets – but for a pittance.

That's when I remembered I was holding the tickets of the English bloke.

The Brazilians spoke little English, and they were offering about a tenth of the face value of the tickets. I didn’t know what to do.

Finally when the line was going to turn the corner and there was going to be no chance to do anything with tickets I decided I may as well sell them, as there was no point in going in with two extra tickets, even if I was virtually giving them away at the price they were offering. I got rid of them for the equivalent of about $20 - for two “priceless” World Cup tickets.

Now we were on our way in, and when I had to produce my ticket, I looked in my pouch – where I also had my tickets for the other Aussie games – and HOLY S*** – I had given my ticket to the guy to whom I sold the English guy’s tickets!

I broke into a cold sweat, and actually I thought I was going to have a heart attack. 40 minutes to kick-off and I didn’t have a ticket!!!! 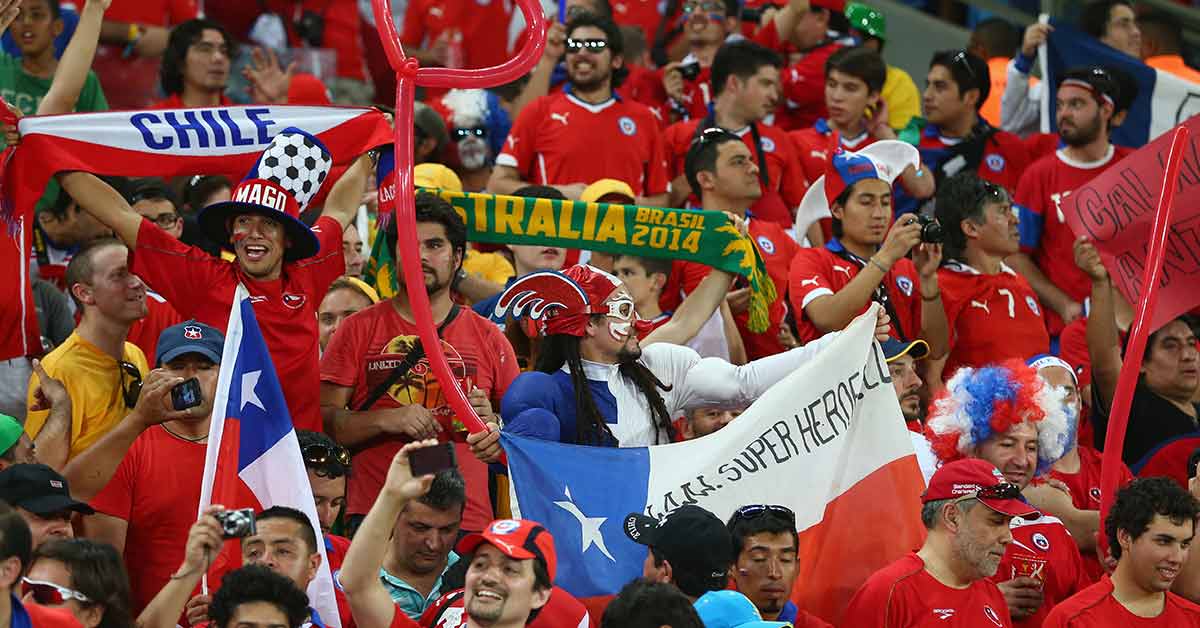 We jumped out of the line and ran to find the man to whom I sold the tickets.

We found him. He didn’t speak English and I was about to shake the ticket off him, but there were police around and I realised violence wasn’t going to get me anywhere.

Some press spotted me and they came over and started to interview me. I explained that I had mistakenly sold my ticket to the game – hoping they might be able to help. After a couple of minutes I realised they would be no help.

Then I saw another Brazilian who was selling tickets. He was a Cuiaba local. The ticket looked the same but instead of the ticket price being in US$ it was in Brazilian reals. He wanted to sell two tickets, but I only wanted one. It was now 20 minutes before kick-off. I bit the bullet and paid up for the ticket. OK, now let’s get in and not miss the kick-off.

I entered the cauldron – the stadium seemed to be covered in the red and blue jerseys of Chile – 80% Chilean supporters and maybe 20% Aussie. You guessed it, I was a gold jersey seated in an entire stand of red. I couldn’t see a single gold jersey on the side of the stadium I was sitting.

I was getting to my seat as the anthems were being played. When Alexis Sanchez scored after 12 minutes the South Americans who surrounded me started to let me have it. And when they scored the second two minutes later, I felt like it was very a long way to travel to get slaughtered.

But then we started to get some of the ball and Timmy scored an awesome header, which was right in front of me. Then I stood up and turned to the Chileans around me and said, 'see, that’s what we can do!'

It was around that time that I realised I should probably find my friends as we had a flight back to Rio right after the game.

Following phone call after phone call and short move after move around the stadium (while still attempting to watch the game), I finally found my group of friends up in Australian fans section in the top corner of the stadium around the 80-minute mark.

In the end, everything worked out as we made our way to the airport after the game.

But, if there's one thing I've learned - treat your ticket like your life at a FIFA World Cup match!