From Europe to Asia and the A-League Men's, plenty of Socceroos have been on the move throughout 2021. As silly season approaches in January, check out our roundup of all the transfers that occurred over the past year.

The Socceroos goalkeeper had spent the last four years contracted to English club Bright & Hove Albion, which included over 100 Premier League appearances and a dream loan stint with his boyhood club Arsenal at the back-end of last season.

Ryan, 29, moved to Brighton from Spanish outfit Valencia for a then-club record fee back in 2017, and has now returned to La Liga with Basque-based side Real Sociedad. 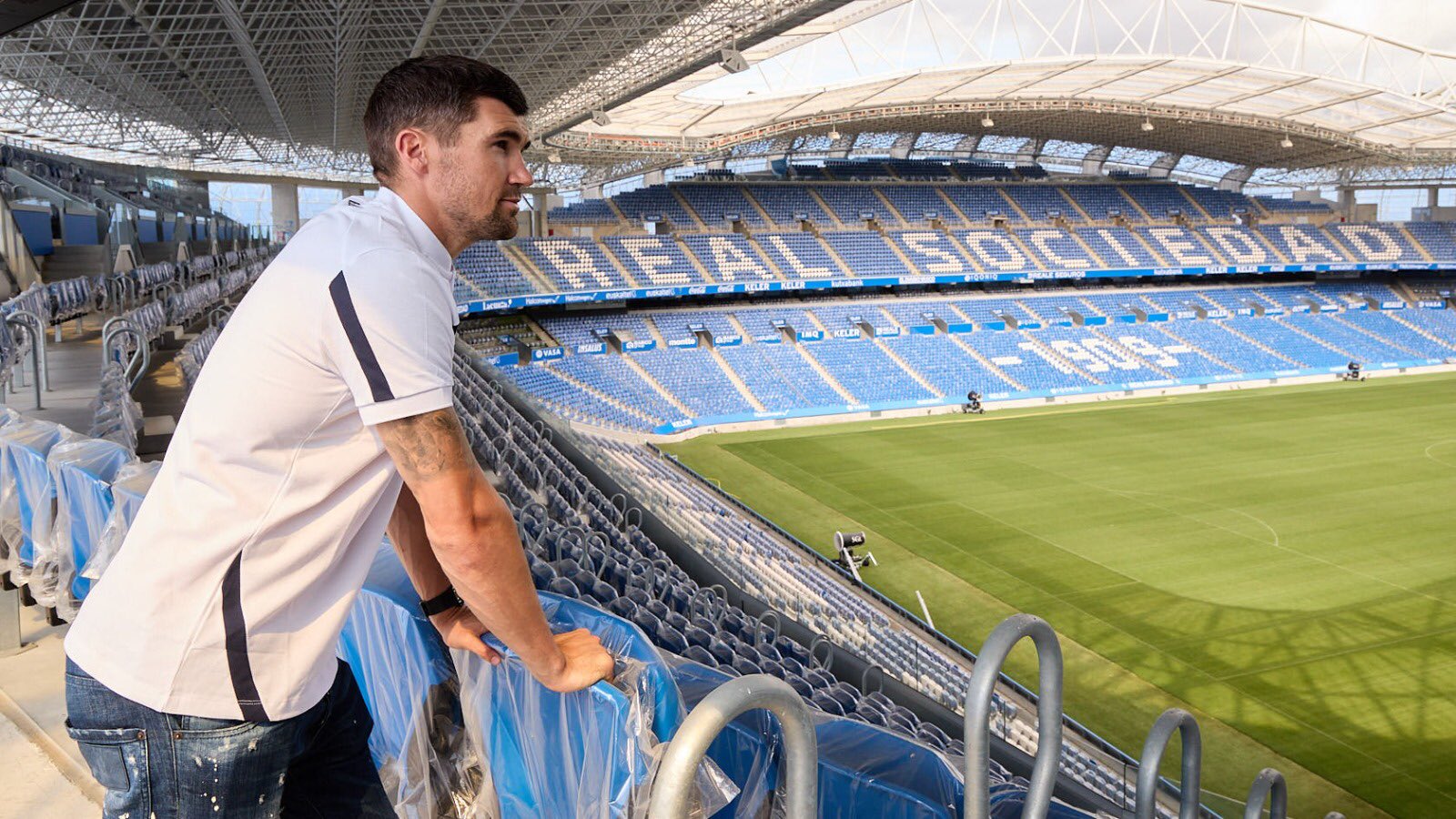 Los Txuri-Urdin are a historic club with a strong fanbase, and following a fifth-placed finish in the league last season, will play in the 2021-22 Europa League.

The club confirmed Ryan's deal extends until the end of the 2022-23 season, with an option of one extra year.

Since joining the club, he has made two appearances, including a man-of-the-match performance in a 2-0 win over Celta Vigo.

Jackson Irvine is plying his trade in Germany, after joining historic club FC St. Pauli on a free transfer in July.

The Socceroos midfielder signed with the 2. Bundesliga outfit following the expiration of his short-term deal with Scottish side Hibernian.

Irvine appeared 21 times for Hibs since joining in January after a 11-month long break from football following his departure from Hull City in the English Championship.

The 28-year-old has been in career-best form for the Socceroos this year, concluding the second-phase FIFA World Cup Qualification group as Australia's top goal contributor - scoring three times and registering five assists.

FC St. Pauli, based in Northern German city Hamburg, is renowned throughout world football for its fan culture and passionate following.

Since signing for the club, he has gone on to make nine appearances, including a goal in a 4-2 victory at Heidenheim.

The recently-promoted  Eredivisie outfit announced that he has signed a two-year contract, with an option included for an extra season.

Vukovic returned to Europe after departing KRC Genk in March and spending time with the Socceroos during their June FIFA World Cup Qualifiers in Kuwait City.

The 26-year-old, who spent last season with Fortuna Düsseldorf on loan from Bundesliga club SC Freiburg, is donning the number 25 at the newly-promoted 2. Bundesliga outfit.

Borrello is no stranger to German football, having made over 50 appearances in the European nation's top two tiers since trading Brisbane Roar for 1. FC Kaiserslautern in 2017.

The attacker was as a member of Australia's squad for June's FIFA World Cup Qualifiers in Kuwait, where he started and set up Mitchell Duke's first goal in a 5-1 victory over Chinese Taipei.

Weeks after representing the Socceroos in Kuwait City in June, Ryan McGowan confirmed a return to the Middle East, where he is now playing for Kuwait SC.

The Australian centre-back is plying his tade in the Kuwait Premier League for the three-time AFC Cup Champions.

McGowan was welcomed back into the national team in June, starting in the Socceroos' 3-0 FIFA World Cup Qualifying win over Kuwait.

The call-up came after a couple of successful seasons in the A-League with Sydney FC, where he secured a Premiership and Championship double in his first campaign before helping the club to their third consecutive Grand Final in 2020/21.

A-League club Melbourne Victory confirmed the signing of Chris Ikonomidis on a three-year deal in June.

The Socceroos forward, who played for fellow A-League club Perth Glory last season, is now representing the navy blue of Victory for the 2021-22 season under new boss Tony Popovic.

The 26-year-old has 16 goals in 41 A-League appearances to date, and played an instrumental role in winning the 2018-19 Premiership under the former Socceroo Popovic at the Glory.

Not only has he reunited Popovic in Melbourne, but Ikonomidis has also linked back up with former Perth teammates Matthew Spiranovic, Jason Davidson and Jason Geria.

After recovering from a long-term injury, the attacker returned to form late last season and was a member of the Socceroos squad that maintained Australia's perfect FIFA World Cup Qualifying record and passage to the final stage of the Asian Qualifiers in June and July.

Fresh off finishing up with the Olyroos at Tokyo 2020, Denis Genreau sealed an exciting transfer to France.

The 22-year-old signed with Ligue 2 outfit Toulouse FC, where he is donning the number five shirt and flourishing in an attacking midfield role.

It has been a whirlwind year for Genreau, who became Socceroo cap #610 after earning his debut against Chinese Taipei in June.

He then was named in the Olyroos squad for the Olympic Men's Football Tournament, where he started all three of Australia's group stage matches against Argentina, Spain and Egypt.

After impressing during Macarthur FC's first A-League campaign, earning the club's inaugural Macarthur Medal for Player of the Season in the process, Genreau is set to move abroad to the nation of his birth.

Genreau was born in Paris, before relocating down under at the age of two, and has been a long-term admirer of French football.

Mathew Leckie returned to his hometown in June after signing a three-year deal with Melbourne City.

The 30-year-old returned to the A-League after spending the last 10 seasons of his career in Germany, having most recently played for Hertha BSC after stints at FC Ingolstadt 04, FSV Frankfurt and Borussia Monchengladbach.

Leckie scored 10 goals from 139 Bundesliga appearances and netted a further 21 times in the second tier.

Following the conclusion of his contract with Istanbul İstanbul Başakşehir F.K., for whom he spent last season on loan at Kayserispor, Aziz Behich signed a one year deal with Giresunspor in the Turkish Super Lig.

Behich has made over 150 appearances in the competition since first joining Bursaspor in 2013 - whilst continuing to impress at international level.

He has now made half a dozen appearances for the newly-promoted club in Giresunspor, who secured a place in the Super League for the first time in 44 years last season.

In January, Fran Karačić swapped Croatia for Brescia in the Serie B.

Before the switch, the 25-year-old was playing on loan at NK Lokomotiva with game time hard to come by at parent club Dinamo Zagreb.

While there was interest from other clubs in Croatia, Karačić opted to sign for Brescia and with over 17 appearances now under his belt, he has not looked back since.

After showing himself to be one of the strongest and most commanding midfielders in the A-league last season, Gianni Stensness transferred from Central Coast Mariners to Viking FK in Norway.

A defensive-minded midfielder also capable of slotting into the back four, Stensness recently scored his first goal for Viking, who currently sit third in the Eliteserien.

A week later, things got even more exciting as he was rewarded with his maiden Socceroos call-up.

After representing Australia at Tokyo 2020, Mitchell Duke decided to remain on Japanese shores as he put pen to paper with Fagiano Okayama in J League 2.

The move came after a busy few months for the striker, who scored two goals for the Socceroos in June before being the Olyroos' sole overage representative at the Olympic Men's Football Tournament.

The 30-year-old spent the back-end of last season at the Western Sydney Wanderers, on loan from Saudi Arabia-based club Al Taawoun FC.

He has previously plied his trade in Japan, making nearly 100 appearances for Shimizu S-Pulse between 2015 and 2017.

After winning Israel's top division golden boot in the past two seasons by scoring 41 goals in 64 games, Nikita Rukavytsya ended his five-year stint with Maccabi Haifa and signed for Hapoel Be'er Sheva F.C.

This year, Graham Arnold recognised the 34-year-old forward’s form by recalling him to the Socceroos squad for the first time in more than three years.

Last year, Rukavytsya had the longest unbroken scoring run in top-division football anywhere on the planet as he bagged at least one goal in 13 consecutive games.