On a sunny, fresh day, the Caltex Socceroos got down to business with their first session at Perth’s Rectangular Stadium.

The players who took part were…

New addition to the Socceroos coaching staff, Josep Gombau, spent virtually all the session deep in conversation with “The Boss”, while assistant coach Ante Milicic took the outfield players and Tony Franken the keepers.

On a customary superb surface, the session began with foam roller stretching pitch side (the foam roller is ideal for pre and post session stretching and recovery for all types of athletes, not just elite).

This was followed by a warm up around the pitch (with Timmy Cahill leading the way) before the keepers paired off to do their work.

At this point, the group split into two. Those who’d flown in from Europe plus Cahill were given a much lighter session restricted largely to stretching and some light ball work.

The tougher session – relatively speaking – was for the second group, which included Giannou, Spiranovic, Burns, Sainsbury, Risdon, Milligan and McGowan. 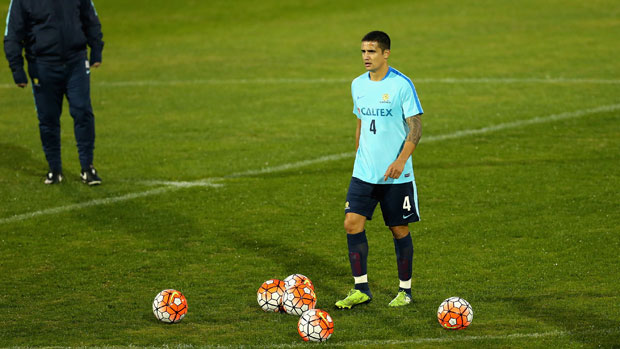 This latter group were first taken for some ball work to “get a feel”. This included touching the ball with all parts of the feet and moving it between cones.

“Get your touches on,” was the Milicic message.

This group then moved onto a more expansive drill and one the Socceroos often do. It involves passing and moving between poles across a distance of about 20 metres.

It was crisp and emphasised inter-passing through lines. “Timing of your runs” and “play third man” was the mantra: praise given with customary “Bravo” from Milicic.

After a break, this main group then worked on one-touch movement and passing in tight areas. Again, it was crisp as the 3v3 drill went on for another 10 minutes.

Ange and Gombau watched on closely. And it was all over shortly after.

In summary, a light session for those who needed it and a sharper session for many of those who were given the weekend off in China.