The Caltex Socceroos have booked their spot in the next stage of World Cup qualifying in emphatic fashion, crushing Harry Redknapp’s Jordan 5-1 on Tuesday night in Sydney.

A Tim Cahill brace either side of an Aaron Mooy goal had the result sewn up by half-time as the Socceroos raced to a 3-0 lead in front of almost 25,000 fans in Sydney.

And there was no let-up after the break with Tom Rogic and substitute Massimo Luongo getting in on the act to complete a superb display by the green and gold, soured only by Abdallah Deeb’s late strike.

The result not only ensures top spot in the group and progression to the next stage of qualifying but gives the Aussies some revenge for the 2-0 loss in Amman in October. 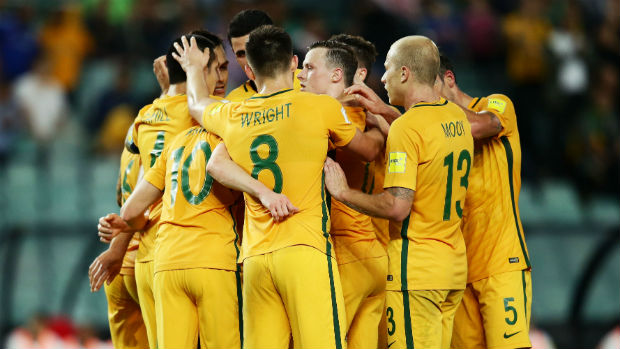 Robbie Kruse led the way for the home side with three assists in the first half, while Cahill’s double takes his international tally to 47 goals from 89 caps.

Kruse was on the end of a horror tackle by Yousef Ahmed Mohammad in the second half - which should have been punished with a straight red card – with the Bayer Leverkusen attacker forced off soon after with a possible knee injury.

Ange Postecoglou made five changes to the team that swept aside Tajikistan last week, with Cahill, Rogic, Kruse and Josh Risdon all in, while Mark Milligan got a start with skipper Mile Jedinak failing in his fitness battle. 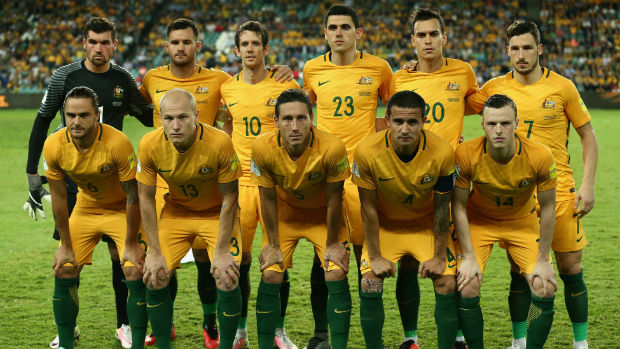 And the Socceroos controlled the game in the first 15 minutes, with the exciting, attacking contingent of Aaron Mooy, Rogic, Kruse and Mathew Leckie seeing plenty of the ball.

But the stubborn Jordan rearguard was proven hard to break down, with clear chances hard to come by on the poor Allianz Stadium surface.

Rogic went closest on 17 minutes when, given a tad too much space on the edge of the box, he hit a low shot for the corner which keeper Amer Shafi did well to tip around the post.

It was a sign of things to come. And just seven minutes later the home side had their opening goal.

Risdon and Mooy were both involved with the latter finding Kruse on the right and he drove to the byline before his cross gave Cahill an easy tap in. 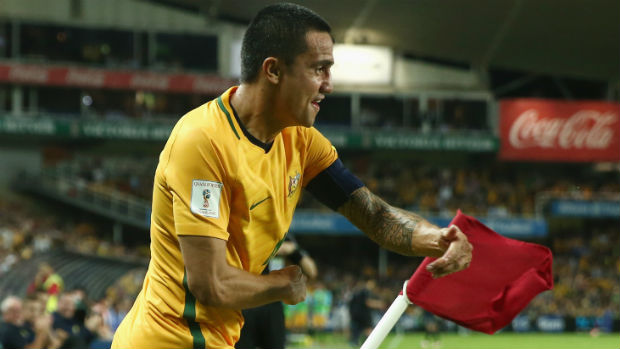 The trademark celebration with the corner flag followed as the Socceroos took a giant stride towards the next stage of qualifiers.

Jordan were visibly tiring nearing the break and the Aussies sensed a second goal could kill off the contest.

Mooy delivered it six minutes before half-time. Again Kruse was the architect, picking up possession just inside Jordan’s half and releasing Mooy clean through on goal with the Melbourne City man making no mistake. 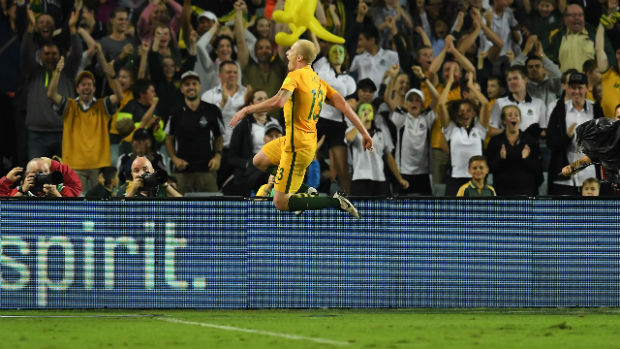 It got better for Postecoglou’s side just before the break as a trademark Cahill header – from Kruse’s excellent centre – made it 3-0.

Jordan’s confidence was sapped and Rogic stuck another dagger in eight minutes into the second half.

After Cahill’s initial effort was blocked, the Celtic playmaker swooped on the loose ball, taking it around one defender before poking it past a helpless Shafi.

Leckie and Mooy were given an early rest, replaced by Chris Ikonomidis and Luongo and the two subs combined for Australia’s fifth. 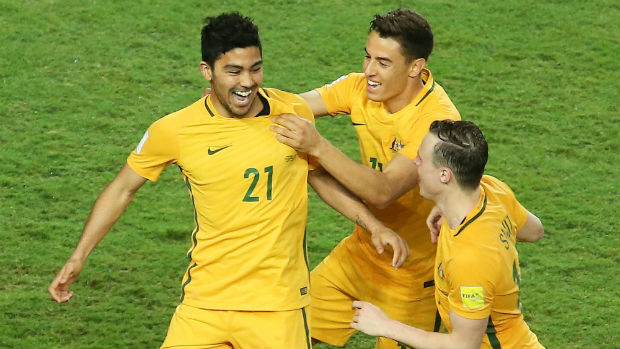 Brad Smith’s quick throw found Ikonomidis free and his centre went right across the face of goal where Luongo was arriving to smash home from close range.

It could have got a whole lot uglier for Jordan last one as Rogic, Trent Sainsbury and Cahill all failed to capitalise on excellent opportunities.

Deeb got a consolation for the visitors in the last minute but it was of little consequence, with the Socceroos to await their opponents in the next stage at the draw in mid-April.