Caltex Socceroos outclass Kuwait as Arnie starts with a win

Graham Arnold’s reign as new Caltex Socceroos boss has got off to a dream start with Australia crushing Kuwait 4-0 on Tuesday morning (AEDT).

In a perfect beginning to Australian football’s new era, the Caltex Socceroos scored twice in each half to cap an encouraging and exciting performance in their first hit-out since the FIFA World Cup.

RE-CAP: Look back at all the goals and talking points from Australia's win over Kuwait

An own goal gave the Caltex Socceroos a deserved lead, before Apostolos Giannou, Tom Rogic and Awer Mabil – on his international debut - all got on the scoresheet.

Arnold went with a 4-3-3 formation for his first starting XI, with Danny Vukovic in goal and the same back-four which started all three games at the recent FIFA World Cup.

Mark Milligan skippered the side, with Giannou getting the nod up front and Massimo Luongo and Jackson Irvine anchoring the midfield.

The Caltex Socceroos promised to attack in the lead-up to the match and did that from the outset, racing to a 2-0 lead by the midway point of the first half.

A sensational cross from Robbie Kruse lead to an own goal from defender Khalid El Ibrahim, before Giannou pounced for his first international goal soon after.

Arnold’s side was in cruise control and should have taken an even healthier lead to the break given their dominance.

The second half followed a similar theme with the Caltex Socceroos on the front foot and carving out a few chances without making the most of them.

Arnold brought on Daniel Arzani who showed some flashes of brilliance, while there were international debuts off the bench for Awer Mabil and Thomas Deng.

And the trio certainly gave Australia a spark, with Rogic getting in on the act eight minutes from time with a neat run and finish.

Mabil then made it a night to remember, scoring his maiden goal on his first appearance to cap an excellent outing for Arnold and the Caltex Socceroos.

Plenty to get excited about ahead of the two friendlies in Australia next month against Korea Republic and Lebanon.

10’ STRONG START – The Caltex Socceroos started on the front foot, pressuring Kuwait with intense pressing. The early momentum saw the Caltex Socceroos enjoy almost 60% possession and whip a number of dangerous balls into the box.

12’ AUSTRALIA LEAD – A reward for the early pressure! Robbie Kruse’s puts in a dangerous cross from the left, with defender Khalid El Ibrahim stooping to head clear, only to divert it into his own net.

14’ BEHICH GOES CLOSE – The Caltex Socceroos left-back did well to wriggle his way through traffic in the box but his goal-bound shot was blocked away for a corner.

21’ GIANNOU DOUBLES THE ADVANTAGE – Jackson Irvine plays a ball into the box which the defender fails to clear, with the ball dropping to Giannou to poke home from close range for his first international goal.

45+1’ LECKIE ALMOST ADDS A THIRD – Kruse sends a floating cross from the right to the far post, with Leckie’s volley tipped over the bar by the keeper. 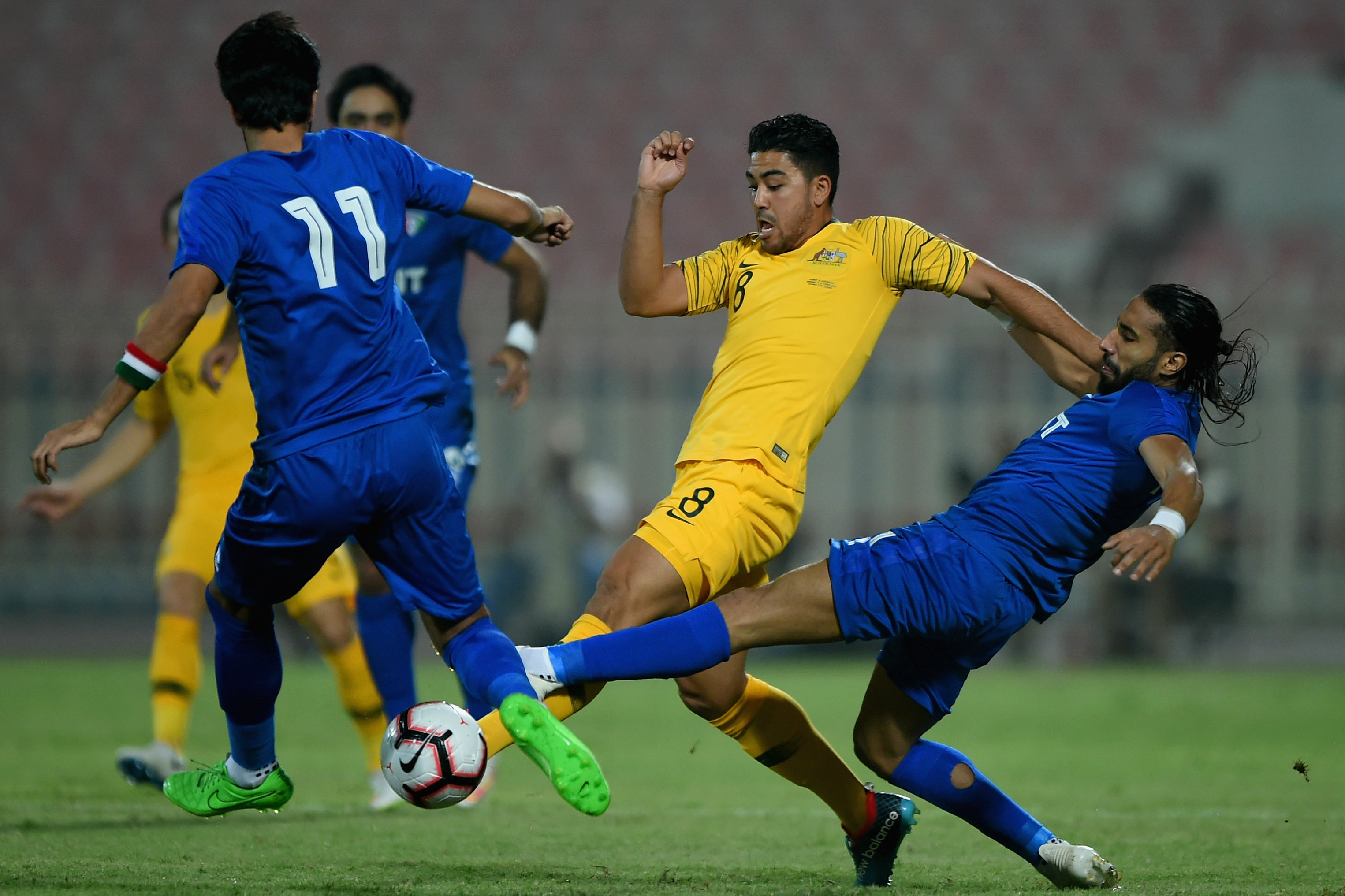 50’ VUKOVIC TO THE RESCUE – Kuwait’s best moment as a long-range strike is destined for the back of the net, forcing Danny Vukovic into a fingertip save to touch it over the bar.

58’ RISDON LETS FLY – Right-back Josh Risdon cuts onto his left foot and hits a powerful, dipping shot from the top of the box, with the keeper getting down low to make a strong save. That was destined for the net!

70’ ARZANI ON THE ATTACK – One-on-one with his defender, the teenager shifts the ball onto his right foot and shoots from 15 yards but it flies over the bar.

82’ ROGIC SEALS THE DEAL – Rogic picks the ball up in Kuwait’s half and he finishes off a nice run with a finish into the bottom corner.

88’ WHAT A MOMENT FOR MABIL – Tomi Juric slips a clever pass to Mabil who shows great composure to slot the ball past the keeper.