Cahill the hero as Socceroos win in Dhaka

A first half hat-trick to evergreen striker Tim Cahill has helped the Socceroos to crush Bangladesh 4-0 in their World Cup qualifier in Dhaka on Tuesday night.

Cahill completed his treble in a smashing first half from Australia, taking his international tally to an incredible 45 goals in just 88 caps.

Skipper Mile Jedinak also found the scoresheet in the opening 45 minutes before Ange Postecoglou’s side eased up somewhat with the three points secured.

For Cahill, it was the second time he has scored a hat-trick in the green and gold, coming 11 years after his other treble against Fiji at the 2004 Oceania Nations Cup. 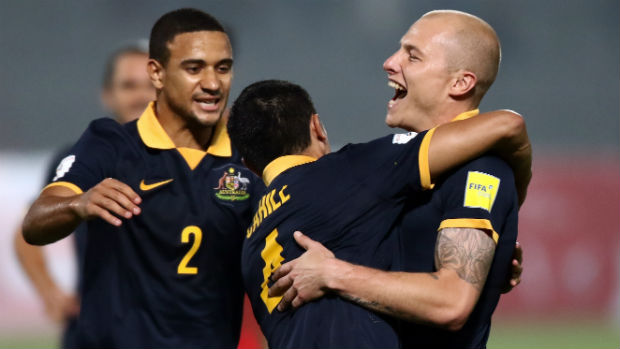 The result takes the Socceroos to the top of the group, although Jordan could leapfrog them again if they beat Kyrgyzstan later on Wednesday morning (AEDT).

There were four changes from the team that eased past Kyrgyzstan last week, most notably a debut for Perth Glory youngster Josh Risdon at right-back.

But it was two established stars that combined for the opening goal inside six minutes.

The Bangladesh defence inexplicably left Cahill unmarked from an Aaron Mooy free-kick and the 35-year-old had no trouble diverting his header past Sahidul Alam.

The Socceroos were doing it easily, though the long grass at the Bangabandhu National Stadium was slowing them down, making it hard to zip their passes around.

It was only going to be a matter of time though before the goals came and the Aussies added three more before the break in an 11-minute period.

First Cahill poked home from close range after a goalmouth scramble from Risdon’s cross before Mooy again teed him up for his hat-trick five minutes later. 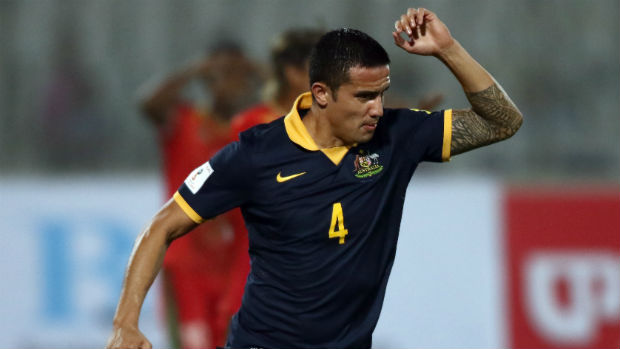 The skipper then got in on the act two minutes before the break as he scored with a simple header to make it 4-0.

Tommy Oar and James Troisi were introduced at the break – for Mooy and Massimo Luongo – and there was no let up from the Socceroos as they continued to push for more goals.

Cahill almost had a fourth from a headed chance, while McKay saw his volley saved and Jedinak was denied a clever overhead kick goal by an acrobatic Alam save.

Despite their best efforts, there would be no more goals for the Australians as the intensity seeped out of the match late on.

The Socceroos now have just two qualifiers to come in this phase – both at home in March – against Tajikistan and a potentially defining fixture with Jordan.