Nicholas D'Agostino’s goal against Uzbekistan sealed the Australia’s U-23’s men’s national team qualification for an Olympic Games for the first time in 12 years.

With Australia's campaign at the Tokyo 2020 Olympics delayed by a year, Socceroos.com.au looks back at Australian football's Olympics history as anniversaries of previous matches fall throughout July, August and September.

An Australian side featuring mostly amateurs faced Japan in the first round of matches with star players Joe Marston and Cliff Almond playing key parts in a 2-0 win.

With only six nations taking part in the tournament, victory in the second round against India would ensure Australia a spot in the semi-finals.

Pre-match discussions bizarrely revolved around whether India could play without boots and after official debate it was decided they would only be able to remove their boots if experiencing foot cramps.

Multiple defensive errors cost Australia who lost 4-2 and were eliminated from the tournament, removing any chance of claiming a medal in front of its home crowd.

The team did not compete again until Seoul 1988 where they boasted players such as Charlie Yankos, Graham Arnold, Frank Farina and Robbie Slater.

Farina opened the scoring against a strong Yugoslavia side which proved to be enough to give the U-23's a 1-0 victory in its opening match.

Celebrations were short lived however with Brazil striker Romario scoring a classy hat-trick in his side’s 3-0 victory.

Australia needed a result in its final group stage match against Nigeria to guarantee progression in the tournament.

John Kosmina ensured safe passageway for the U-23's courtesy of a 76th minute winner, sending his country to the quarter finals.

A showdown with the Soviet Union beckoned for Australia who started brightly but ended up going down 3-0 to the eventual gold medal winners.

Following a loss and draw to Ghana and Mexico respectively, Australia defeated Denmark 3-0 to secure a quarter-final berth against Sweden at the Camp Nou.

Goals from John Markovski and Shaun Murphy guided Australia to a 2-1 victory and its first ever Olympic semi-final.

An even first half saw Carl Veart equalise for Australia before Mark Viduka’s red card proved a catalyst for an energetic Poland side to run over Australia in front of 45,000 spectators in Barcelona.

Australia would ultimately finish fourth after losing to group stage opponents Ghana in the third-place play-off match with Spain taking the gold medal over Poland in the final.

Eddie Thompson took a youthful side to America in his second Olympic tournament as coach with Aurelio Vidmar and Steve Horvat included as overage players.

Facing European giants France in its opening match was always going to be tough and an opening goal from Robert Pires did no favours for Australia who would go on to lose 2-0.

An Aurelio Vidmar brace saw Australia take an early 2-0 lead against Spain in its final group game before goals to Raul Gonzalez and Santiago Denia tied the score.

Australian hearts were broken in stoppage time when Real Madrid’s Raul netted a winner to eliminate Australia from the tournament.

Australia were defeated by Italy 1-0 in its first match courtesy of a late Andrea Pirlo goal in front of 93, 252 spectators at the Melbourne Cricket Ground.

A fighting performance against Nigeria followed but early goals from the Super Eagles ensured a 3-2 victory for the African nation, eliminating the host country from the tournament with one match to play.

Australia’s final match was played in Sydney and saw the emergence of Cagliari striker David Suazo outclass Australia claiming a brace for Honduras in a 2-1 victory.

A well supported campaign ended in disappointment for Australia with the media and critics looking towards the then active Australian Soccer Association for answers. 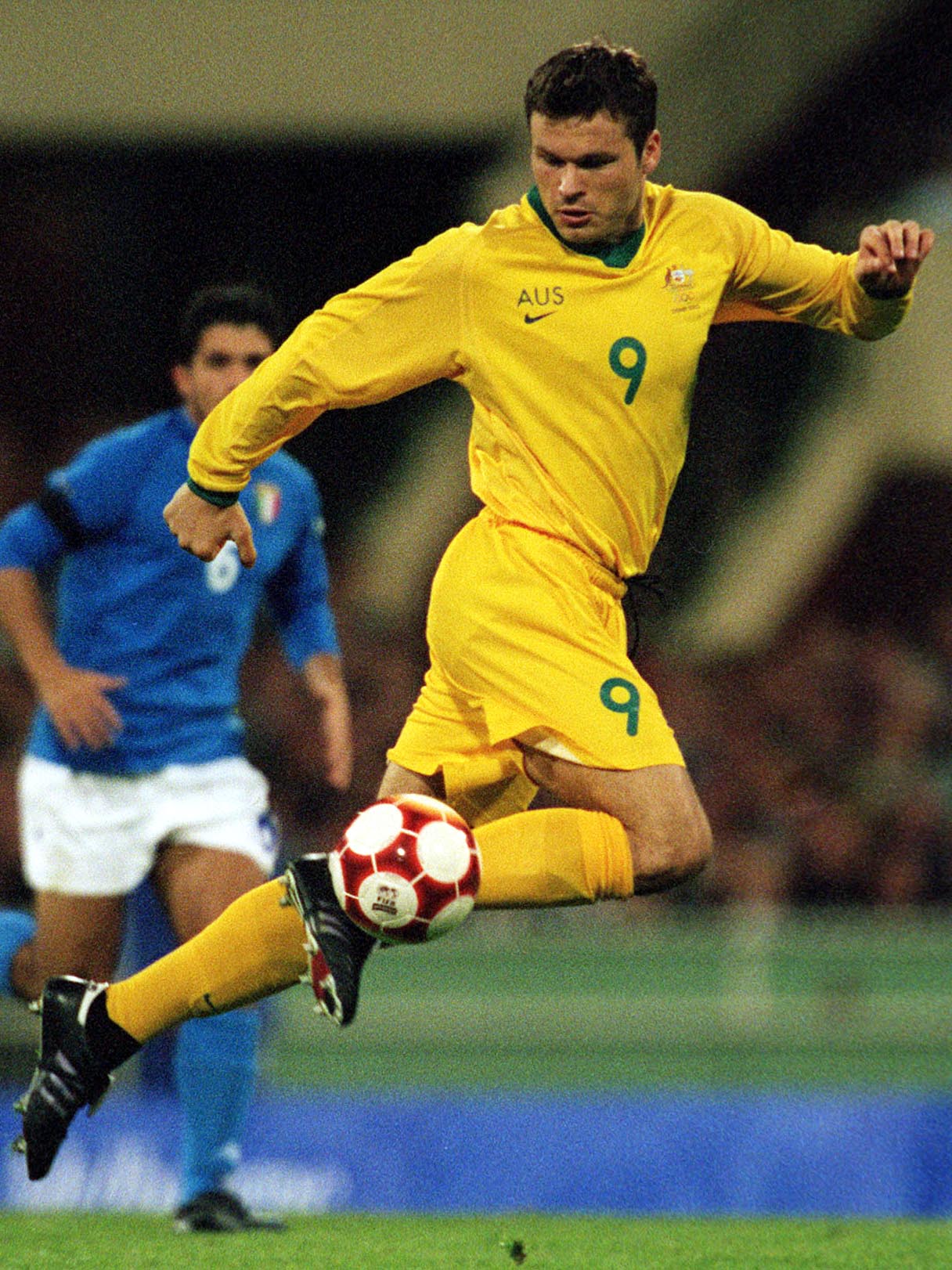 Aloisi wasted no time in helping Australia to a 1-1 draw with Tunisia, scoring in Australia’s opening game, before a sparkling team performance saw Australia demolish Serbia and Montenegro 5-1.

A narrow 1-0 defeat to Argentina meant Australia finished second in the group, setting up a quarter-final showdown with Iraq.

Iraq’s spirited outfit did enough to edge Australia 1-0 thanks to Emad Mohammed’s goal which proved to spur the senior side on in the coming years, culminating in their Asian Cup triumph in 2007.

A promising opening display against Serbia earnt Australia a 1-1 draw thanks to a Ruben Zadkovich goal.

Australia’s second game was against South American heavyweights Argentina who started a young left footed player by the name of Lionel Messi.

Australia held the Albiceleste at bay for 76 minutes before the deadlock was broken by Ezequiel Lavezzi who scored the solitary goal of the game.

Needing a win from its final game, Australia fought hard against Cote d’Ivoire but a goal from Salomon Kalou was enough to knock Australia out of the tournament.